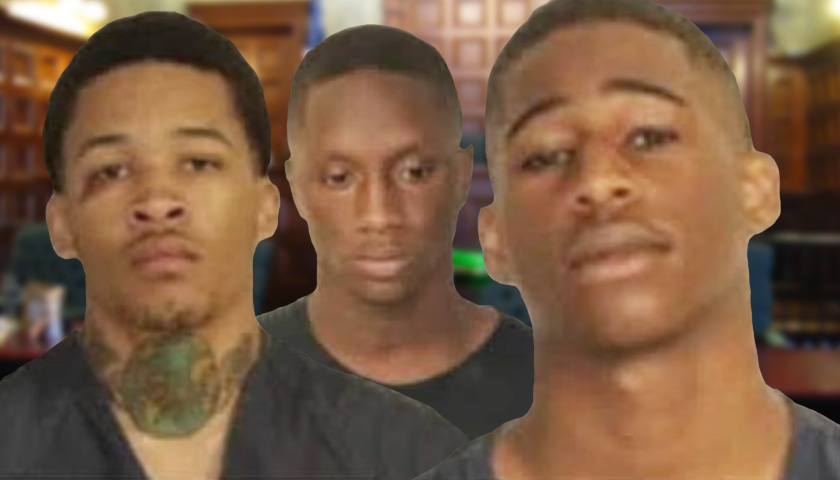 Four men received federal prison sentences after being convicted of carjacking, assaulting a federal officer, and using a weapon during the crimes committed in Memphis nearly two years ago.

In May of 2021, Julius Armstrong, 20; Adairius Armstrong, 20; Barium Martin, 20; and Malik McCoy, 19, committed a string of violent armed carjackings in Memphis, according to information presented in court cited by the Western District of Tennessee’s U.S. Attorney’s Office.

A traffic camera caught the individuals in one of the stolen vehicles crashing out on May 7, 2021. The men were confronted by two law enforcement officers: a special agent with the Bureau of Alcohol, Tobacco, Firearms, and Explosives (ATF) and a sergeant with the Memphis Police Department (MPD). Using handguns and assault rifles, the four individuals shot at the vehicle the two officers were in, injuring them both, according to the U.S. Attorney’s Office.

Adairius Armstrong received 18 years of imprisonment after pleading guilty to carjacking and brandishing a firearm during a carjacking.

Barium Martin got 13 years of imprisonment after pleading guilty to carjacking, brandishing a firearm during a carjacking, and assault on a federal officer.

Malik McCoy obtained 13 years of imprisonment after pleading guilty to carjacking, brandishing a firearm during a carjacking, and assault on a federal officer. Due to his age at the time of the crimes, McCoy was originally charged as a juvenile before being transferred to adult status in federal court, the U.S. Attorney’s Office notes.

“These young men engaged in violent criminal acts, including shooting at and injuring law enforcement officers. Their serious crimes deserved serious sentences. Protecting Americans from gun violence is one of our top priorities, and our efforts in this area will remain robust and unrelenting,” United States Attorney Kevin G. Ritz said in a statement.

Kaitlin Housler is a reporter at The Tennessee Star and The Star News Network.
Background Photo “Courtroom” by Clyde Robinson. CC BY 2.0.