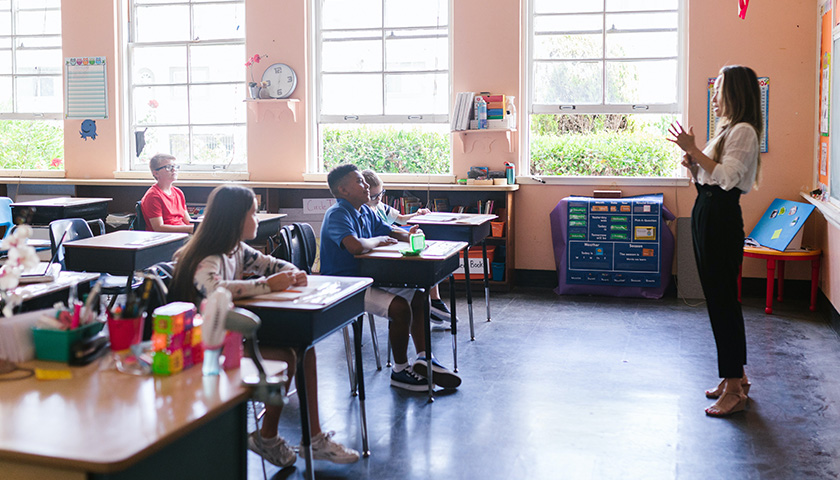 Despite Republican State Senator Sandra O’Brien (R-Ashtabula) re-introducing the Parental Education Freedom Act to empower parents to be the primary decision-makers regarding where and what type of education their children receive, an undercover investigation has revealed that school administrators in Cincinnati, Ohio have admitted to covertly indoctrinating students with Critical Race Theory (CRT) in the classrooms.

As part of Accuracy in Media‘s investigation, numerous school administrators admitted that teachers are sneakily and covertly introducing CRT to their students unbeknownst to their parents and that they don’t plan to stop even if lawmakers pass legislation prohibiting this.

According to David Traubert, Social Studies Curriculum Manager for Cincinnati, Ohio schools whatever prospective laws there may be, they will continue to teach what they see fit.

“Should I stay in my position If this law (CRT Ban) goes through, heaven forbid, we would be covert in our language,” Traubert said.

According to Vivian Alvarez, Assistant Principal in Mason City, Ohio, she wouldn’t be concerned if the legislation prohibiting CRT in schools were to pass as the local government supports CRT indoctrination.

“It’s a local decision so he (Governor DeWine) can pass it just like anything else that he passes. But it’s up to the local government which is our governing board to decide. So even if they did that Critical Race Theory ban locally they (the board) would be like eh not for us,” Alvarez said.

She continued by saying that her district uses diversion tactics to keep parents in the dark.

“We’ll call it something else. We’re still going to do the same work. There’s enough of us here to not call it that (Critical Race Theory),” Alvarez said.

According to Tim Weber, Superintendent in Wyoming, Ohio, he highlights “belonging” and “inclusion” in his district as a way to talk about social justice and anti-racism with students without raising a red flag to parents.

“So we do move forward with that. As the superintendent, I do choose words wisely though to make sure we are able to move forward. I want to make sure that we’re moving forward with the right frame of mind and reference and I don’t want to be stopped at the most important work that we’re doing. That’s why “belonging is really the keyword that we focus on,” Weber said.

In addition to using the radical and debunked New York Times 1619 Project in the Wyoming City School district, they also use the works of Ibram X Kendi. Who in order to balance out historical racism and discrimination against other groups of people, Kendi says that some groups should be subject to racism and discrimination. He also says the Bible is to blame for racism. Essentially, this radical Marxist presents all of the common defenses used by those who favor the government in place of God in our society.

Traubert said that his district doesn’t officially use the 1619 project curriculum however they use it as a resource as well as the controversial book Stamped written by Kendi.

“We don’t have the 1619 Project as part of our curriculum officially. But it’s referenced as a resource in several places. We have authors on our recommended reading list that other districts have said don’t teach this author such as Stamped,” Traubert said.

Traubert continued to say that their district uses Social and Emotional Learning (SEL) in combination with English and Language Arts (ELA) as a way for children to understand anti-racism and social justice.

“We have a whole department of positive school culture and social-emotional learning. The social and emotional learning standards that go K-12 have also been cross walked with our ELA curriculum,” Traubert said.

According to Melissa Stewart, Assistant Superintendent in Indian Hill, Ohio, they require all current and new teachers to go through a week-long training in social justice education including anti-racist training.

“Every teacher in this building for sure is trained in that (CRT) and any new teacher coming in. But all that work is kind of embedded in building a community so that all of our learners are safe,” Stewart said.

Ohioans are using their tax dollars to pay these radicals who are deceiving them. These public school administrators are outspokenly committed to advancing social justice in the classroom; they are committed to teaching kids that capitalism is inherently racist and that America is systemically racist. When parents speak out against these practices, the schools dismiss them as dramatic or committing a slippery slope fallacy. However, the comments by the school administrators validate Ohio parents’ concerns.

Republican lawmakers are pushing for the passage of Senate Bill (SB) 11 to allow parents to make educational decisions that are best for their children and to help end the political games played by the public education system.

According to Ohio’s largest Christian public policy organization, the Center for Christian Virtue‘s President Aaron Baer, “Ohio must no longer allow any student to be trapped in under performing and radically progressive schools that undermine parental rights and authority.”

This is the second undercover investigation Accuracy in Media has conducted in the state of Ohio where administrators have made admission of such indoctrination behind parents backs.

Hannah Poling is a lead reporter at The Ohio Star and The Star News Network. Follow Hannah on Twitter @HannahPoling1. Email tips to [email protected]
Photo “Teacher and Students” by RODNAE Productions.