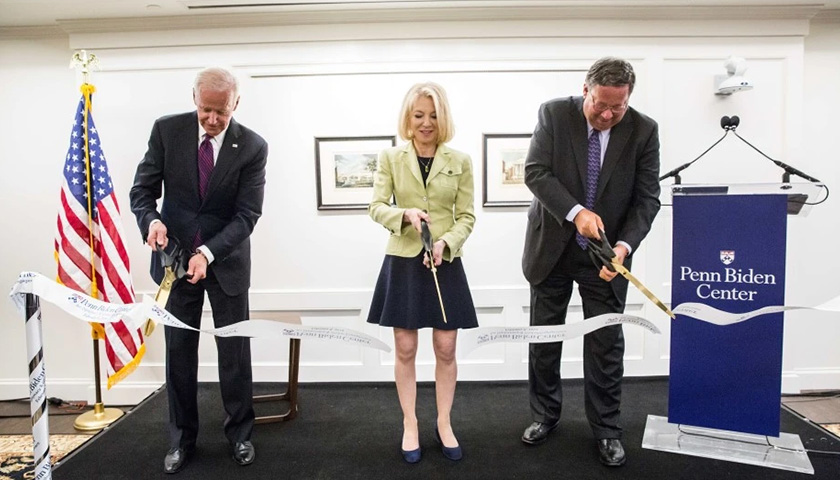 The Penn Biden Center for Diplomacy and Global Engagement opened in 2018 as then-former Vice President Joe Biden’s “think tank.” It was founded, according to the institution, “on the principle that a democratic, open, secure, tolerant, and interconnected world benefits all Americans.”

But it looks like Biden, his 2020 presidential campaign, his liberal allies, and perhaps some foreign friends have grabbed the brunt of the center’s benefits.

John Pudner, executive director of Take Back Our Republic, noted that several Biden 2020 presidential campaign senior staff members worked out of the Washington, D.C. think tank office, violating the University of Pennsylvania’s 501(c)(3) tax-exempt status laws against electioneering, among others.

“Other groups have crossed the line, but this is beyond the pale to have a de facto campaign headquarters, particularly one that’s getting money from China,” Pudner told The Star News Network. As reported, the university and its namesake global think tank have taken in tens of millions of dollars from donors in communist China.

Section 501(c)(3) of the Internal Revenue Code (IRC) precludes a tax exemption of an organization that participates or intervenes in any political activity on behalf of or in opposition to any candidate for elective public office. The University of Pennsylvania is the fiscal sponsor of the Penn Biden Center, where the first of at least two batches of classified documents were “discovered.” Others were found in the president’s garage at his private Delaware residence, where he has spent many of his weekends.

Biden said he was surprised when he was informed of the records turning up at the think tank. Why the discovery was made public in recent days —  more than two months after the classified documents reportedly were found and just days before the November midterm election — is not clear.

Pudner’s group nearly two years ago asked the state AG’s office to launch an investigation “concerning the charitable fundraising and use of funds by the University of Pennsylvania.” Shapiro, a Democratic Party ally of Biden, did nothing, Pudner said.

There was a lot of that inaction going around — on the left and the right.

In its letter, Take Back Our Republic expressed concerns about “the excessive compensation — almost $4 million (annually) — for Amy Gutmann, University of Pennsylvania’s president at the time. Gutmann is now Biden’s ambassador to Germany, named to the post after her good friend moved his operations to the White House.

“Gutmann’s salary is far in excess of that of other university presidents, about twenty times the compensation of the Governor of Pennsylvania. There’s such a thing as too much and this is way too much,” Take Back Our Republic’s letter stated.

The group, as have others, raised questions about the foreign donations that have poured into Penn, a good deal of the money marked “anonymous.”

“Who gave this money, where did it go, and what strings were attached?” the letter asked, noting that any violations of federal law, including the Foreign Agents Registration Act of 1938, should be reported to the Department of Justice.

Asked about donations from China during her Senate confirmation hearing in December 2021, Gutmann claimed less than 1 percent of donations given to Penn at that time came from individuals and entities in China. According to the Philadelphia Business Journal, the former long-time Penn president said she could not keep track of all the contributions made to the university since a new donation is given approximately every three minutes. Penn had recently wrapped up a $5.4 billion, three-and-a-half-year capital campaign, and Gutmann said she had raised over $10 billion since 2004.

If that is true, reports put donations from entities in China at as much as $67 million, well above the 1 percent Gutmann claimed under oath before the Senate committee.

At the hearing, U.S. Senator James Risch (R-Idaho) questioned Gutmann on contributions from donors residing in China. The Star News Network reached out to Risch’s office asking how the senator feels now about Gutmann’s testimony given recent revelations. The office has not yet responded.

Another one of Biden’s Penn friends got a key ambassadorship. David L. Cohen, former Comcast executive and chair of the University of Pennsylvania Board of Trustees for a dozen years, was tapped by Biden as ambassador to Canada. Cohen hosted Biden’s kickoff fundraiser at his Philadelphia home the day the former vice president announced his bid for the White House in April 2019. The former lobbyist hosted Hillary Clinton for a fundraiser at her home in 2015, and a similar events for former President Barack Obama.

The Penn Biden Center is the subject of a new complaint filed by the America First Legal Foundation,  led by former Trump White House official Stephen Miller, according to the New York Post  It asks the IRS to investigate whether the center illegally paid Biden and others for little or no work, among other possible violations.

“Biden earned nearly $1 million from the University of Pennsylvania from 2017 to 2019, despite just nine reported public engagements with students, some of which appeared to be unrelated to his appointment as ‘Benjamin Franklin Presidential Practice Professor’ — such as a November 2017 visit to promote his own book ‘Promise Me, Dad,’ the publication reported.

In 2017, Blinken launched WestExec Advisors, a secretive consulting firm of Obama/Biden henchmen described as a “government-in-waiting.” Before scrubbing their website in the summer of 2020, WestExec boasted that it helped American universities “court donations in China without jeopardizing Pentagon-funded research grants.” An archived version of the firm’s website noted that it worked with schools to “remain a trusted partner for DoD-sponsored research grants while expanding foreign research collaboration,” the Washington Free Beacon reported in 2020.

The America First complaint claims evidence shows Biden was paid nearly $1 million for appearing on the University of Pennsylvania’s campus six times. Other Obama administration officials, including Blinken, were paid by the think tank without providing equivalent services for Penn’s students,” the filing states.

“Penn’s President, Amy Gutmann, allegedly created the Penn Biden Center to benefit Vice President Biden, and, according to emails on Hunter Biden’s laptop, apparently to benefit his family members as well. In exchange, she was nominated to serve as U.S. Ambassador to Germany.”

In 2020, the National Legal and Policy Center asked then-Secretary of Education Betsy DeVos and DOE’s General Counsel Paul Moore to open an investigation into the University of Pennsylvania and the Biden Center for failing to disclose anonymous gifts and contracts from China in violation of Section 117 of the Higher Education Act.

The act requires that all gifts or contracts exceeding $250,000 must disclose foreign ownership and control. NLPC found Penn received more than $67 million from China sources.

“More significantly, after the Penn Center opened here in Washington, D.C., in February 2018, the China gifts poured in all the more, and continued after Biden announced his candidacy of the presidency …, “ the letter states. The “gifts” included more than $22 million in anonymous donations.

DeVos did nothing, according to NLPC counsel Paul Kamenar.

“It is scandalous to see how all of this Chinese money is influencing not only our universities but also President Biden and those around him,” Kamenar told The Star News Network’s Editor-in-Chief Michael Patrick Leahy on Friday’s edition of the Tennessee Star Report with Michael Patrick Leahy.

With the GOP back in control of the House, Republican committee chairs have vowed to dig into the pay-to-play allegations and China money connections.

Pudner, of Take Back Our Republic, said the Biden classified documents and Penn Biden Center scandals having sticking power.

“What’s interesting is this is getting coverage from a mainstream media that often ignores Biden scandals,” he said. “I do think it just doesn’t go away like some scandals on the left. They haven’t found a way to make it go away yet.”