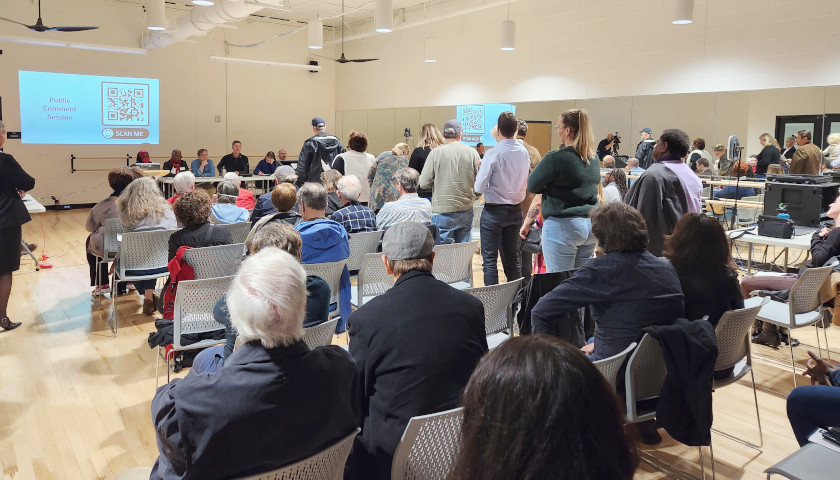 The public comment meeting in Bellevue was the fourth in a series of five scheduled across the county by the East Bank Stadium Committee (EBSC) to hear feedback and comments directly from the community about the proposed $2.1 billion stadium.

Of the approximately 50 people who attended in one of the center’s rooms, more than 30 offered their feedback to the committee and council members, with 17 opposing or questioning the new stadium and 13 being in favor of it. Others stated their concerns but not a clear opinion one way or the other.

As attendees arrived, they were met by representatives of StandUp Nashville (SUN), who handed out a flyer that included 10 vital questions that remain on the proposed new stadium.

A representative for SUN, an advocacy group that was heavily involved in the soccer stadium community benefits negotiation and made a presentation to the EBSC as a contrasting perspective to the Titans’ promotion of their ONE Community platform, told The Tennessee Star that the organization is seeking greater transparency on and community benefits from the stadium deal.

The SUN flyer also pointed out key facts on the proposed new Titans stadium, highlighting that the cost to Metro taxpayers is at least $760 million plus undisclosed costs for the Stadium Village, 2,000 parking spots, Stadium Campus infrastructure, and the allocation to the Capital Repairs Reserve Fund.

SUN’s key takeaway is that Mayor John Cooper’s proposed deal is the largest taxpayer subsidy for an NFL stadium in history.

Immediately after Mendes completed his nearly 20-minute presentation used at all the public comment meetings, a line of about a dozen formed at the podium to offer their comments during their three-minute time limit. As the line went down, more stood to speak over the next more than an hour. 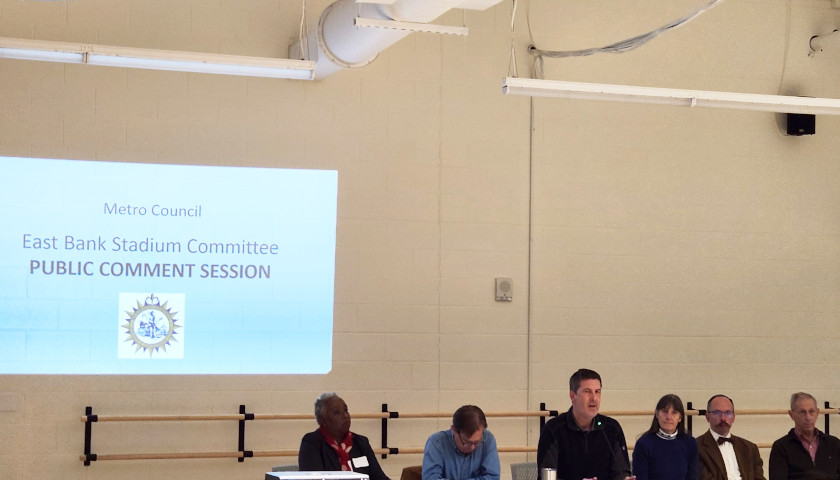 The first speaker from the Bellevue community asked about the life expectancy of the new stadium. He offered the context of the current NFL business model of a stadium life expectancy of 20 to 25 years, and the example of a losing team like the Jacksonville Jaguars and a replacement stadium being voted down that allows the team to move.

Meanwhile, the term sheet being considered for a new stadium would have an initial term equal to that of the 30-year revenue bonds with the option for three extensions of five years each.

Honey Harris, an MNPS employee, union member, and mother of a student said, “I come every year to beg city council – all y’all sitting up here,” as she made a sweeping motion toward the members sitting at the head table, “for money. It’s disheartening that you all are just going to throw money at the Tennessee Titans. And, let me go on the record. Let me say this loud. I am not a fan of the Tennessee Titans, because of their policies. The way they treat people. The footprint that they have left on Nashville. And, they do not do right. I can’t afford to go.”

A resident of The Nations who was on “Dad duty” and came with his tow-haired, toddler son, said he felt a responsibility as a future father of an MNPS student.

“This deal is nothing but a tax on the poor and working class in this city. If the Titans gave so much benefits to us, why are we being told we owe them so much money. There are a number of small- and medium-sized cities that have done really well in the United States over the last 20 years that don’t have a football team, like Austin, so to attribute Nashville’s growth to this team is really misleading.”

He thanked Mendes for highlighting the fiscal “math” that the mayor is doing, adding that if it was such a good deal, [the mayor] wouldn’t have to lie about the $1.8 billion that is supposedly owed.

“In a couple years, when we owe the Titans more money, because we didn’t understand the true needs of this new stadium, we’re going to be forced to either raise taxes, which is political suicide, or cut services and that’s what’s going to happen. This is a transfer of wealth from the poor and working class in the city to millionaires and billionaires that don’t live in Davidson County. I think it’s reprehensible to approve this stadium. There is no economic evidence that this will work. It hasn’t worked anywhere around the country. The only people that are supporting it are boosters who would benefit from it personally, while our teachers and working class can’t afford to live here anymore. I strongly urge you to vote no against this and to hold the Titans to the fire and protest the number. Don’t just accept what they tell us and force their hand a little bit. We have the leverage. The Titans need us more than we need them. People are moving here with or without the Titans, so let’s support the poor and working class in the city,” the speaker concluded to enthusiastic applause.

One speaker pointed out that Tennessee ranks 43rd in education and that there are over 486 social worker openings in DCS and stated emphatically that funding should go toward their request for $1.3 billion rather than the Titans stadium. She questioned the need to spend the money on something that benefits so few. “If I can’t trust my government to put money towards things that are actually important, i.e. education, social workers instead of public stadiums, why would it matter to me,” she concluded.

A young woman in her twenties expressed confusion as to why Nashville needs to be number one in football stadiums, when the team is not number one and hasn’t been a winning team since she was born, and we’re not number one in education, voting, health, putting women first or putting black women first.

Several speakers, including small business owners who have not been the beneficiary of taxpayer subsidies, questioned the overall finances of the proposed deal.

Michael Carter, co-founder of Pinnacle Construction Partners a company that does contracting work and participated in the $300 million soccer stadium project, said that was a big deal that made a difference in this community as will the new stadium.

Clifton Harris, president and CEO of the Urban League of Middle Tennessee, which is a partner in the Titans ONE Community program, said the new lease would release Metro from the obligations of the current lease and allow utilization of the land currently under control of the Titans for affordable housing and parks.

Toby Compton, currently the deputy commissioner of the state’s Department of Commerce and Insurance and Chair of the Nashville Sports Council and formerly with the Metro Sports Authority and involved with the baseball and soccer stadiums while at the Nashville mayor’s office, encouraged further seizing upon Nashville becoming a sports town since the 1990s.

Laura Baigert is a senior reporter at The Star News Network, where she covers stories for The Tennessee Star.