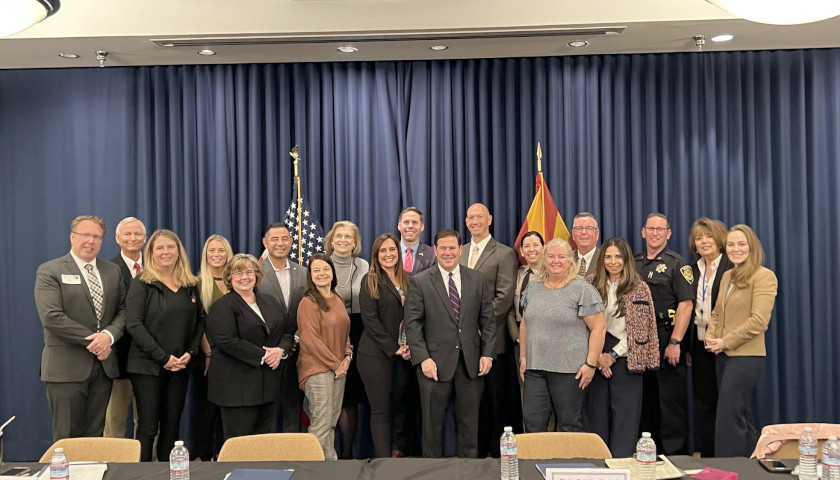 Arizona Governor Doug Ducey (R) announced Thursday that he is launching a statewide campaign to raise awareness about human trafficking.

“It can’t be overstated—human trafficking is real, it is pervasive and it’s an issue Arizona takes seriously,” said Ducey. “Thanks to the collaborative efforts of the [Arizona Human Trafficking] Council and state agencies, Arizona’s youth, our tribal nations, and our entire state are able to join the fight in combating this horrific issue. Anyone can be a victim, but together we can ensure we are doing all we can to protect victims and stop human trafficking throughout our state.”

Human trafficking is real, it is pervasive and it’s an issue Arizona takes seriously. Joined the Arizona Human Trafficking Council to launch a statewide campaign to raise awareness about human trafficking and provide resources to all Arizonans. @AZGOYFF pic.twitter.com/SP0rAUpKEm

The campaign will include the Arizona Department of Public Safety’s (DPS) Arizona Counter Terrorism Information Center Tip Line, which will report and act on suspected trafficking activity. The tip line will be focused on immediate action and will communicate with local law enforcement officials to local and aid victims. Additionally, information on the signs of human trafficking from the Department of Homeland Security’s (DHS) Blue Campaign has been made available through this campaign.

The Governor’s Office of Youth, Faith, and Family (GOYFF) and the Arizona Human Trafficking Council developed this campaign in partnership with the DHS. The initiative comes before Arizona is set to host the 2023 Super Bowl, which will bring increased travel to the state.

“Arizona is committed to preventing trafficking activity throughout every corner of our state and providing victims with the support they need,” said Arizona Human Trafficking Council co-chair Maria Cristina Fuentes.

NEW: "Governor @DougDucey Announces Statewide Campaign to Raise Awareness of Human Trafficking"
Read more below & download the toolkit to join efforts in the fight to #EndTrafficking throughout our state ⤵️@MFuentes127 @McCainInstitute @9thFloorAZ https://t.co/djwxe21xv8

Furthermore, the Arizona Lodging and Tourism Association (ALTA) is also stepping up to help prevent human trafficking. ALTA President and CEO Kim Sabow said that Arizona being a border state makes human trafficking especially dangerous as solving cases may involve agencies and governments across the border. While human trafficking is not an issue that can be solved overnight, Sabow said she would work to make the upcoming Super Bowl as safe as possible for incoming tourists.

“As we approach the Super Bowl in February, our organization is working to educate our members across the tourism and hospitality sector about human trafficking and how commonplace a crime it is. The better we educate the public about what to watch out for, the more likely the criminals will think twice before bringing their enterprise here,” Sabow said.

As reported by The Arizona Sun Times, law enforcement recently caught a human trafficker in Arizona. Jonathan Garcia Hernandez, 19, of Chattanooga, was caught and arrested in Sierra Vista. He drove a 2003 Chevy Tahoe, and with him were six undocumented immigrants. He was charged with Participation in Human Smuggling and Kidnapping.

Moreover, 12 News reported that an FBI nationwide human trafficking crackdown in August led to 17 adult victims being found in Arizona over the course of four days.

In Arizona, the average age of entry into sex trafficking for youth is 13. In 2017, Arizona ranked third in the nation for human trafficking offenses. However, according to World Population Review, Arizona ranks 13 with 193 cases reported in 2022, a rate of 2.64 victims per capita.

Neil Jones is a reporter for The Arizona Sun Times and The Star News Network. Follow Neil on Twitter. Email tips to [email protected].
Photo “Doug Ducey” by Doug Ducey.