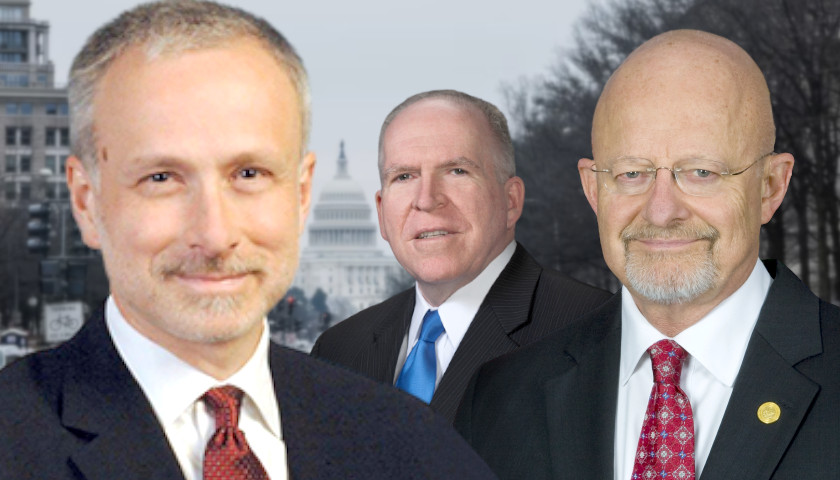 They got the band back together—to the extent the original members ever broke up in the first place.

Recent disclosures by independent journalist Matt Taibbi confirmed what other reporters have been covering for the better part of two years: According to files obtained by Elon Musk, the new owner and CEO of Twitter, the social media platform protected Joe Biden and his family from a major and potentially election-altering scandal as millions of Americans were voting early for president in October 2020. Years of denials and dismissals related to Hunter Biden’s lucrative shakedown of hostile nations, including Russia and China, were set to explode just a few weeks before Election Day.

Big Tech—and the government—was ready. Immediately after the New York Post published damning material retrieved from Hunter Biden’s laptop contradicting Joe Biden’s longtime protestations that he had nothing to do with his son’s profiteering gigs, Twitter claimed the reporting was based on “hacked material” and in violation of the company’s terms of service.

“Twitter took extraordinary steps to suppress the story, removing links and posting warnings that it may be ‘unsafe,’” Taibbi wrote in a lengthy tweet thread on Friday.

The Post’s Twitter account was frozen for two weeks; Twitter users were forbidden from sharing articles on the site. Kayleigh McEnany, Donald Trump’s press secretary at the time, was locked out of her account for sharing the Post’s story. Amid internal confusion as to the company’s shaky explanation for censoring the coverage of Biden’s laptop, Twitter’s general counsel defended the move. James Baker told employees that “caution was warranted” and claimed “some facts . . . indicate that the materials may have been hacked.”

If Baker’s name sounds familiar—and not in a good way—it should. Baker served as former FBI Director James Comey’s top lawyer during Crossfire Hurricane, the FBI’s attempt to sabotage Trump’s campaign and presidency with claims he had been in cahoots with the Kremlin to steal the 2016 election from Hillary Clinton.

Baker’s fingerprints are etched indelibly on any number of Russiagate-associated scams, from seeking the first illicit FISA warrant on the Trump campaign to promoting the falsehood of suspicious links between Trump and a Russian bank. (Jonathan Turley calls Baker the “Kevin Bacon of the Russian collusion scandals.”)

And this is where Taibbi’s tweetstorm took an odd and easily disproved turn. Taibbi says he saw “no evidence of any government involvement in the laptop story.” Now, giving Taibbi the benefit of the doubt—perhaps former Twitter executives wisely purged records between the company and government officials before being escorted out of headquarters—maybe he didn’t see any specific correspondence confirming the participation of federal agencies in the scandal. But the evidence is in full view and has been since the summer of 2020.

First, recall that Biden family corruption was the worst kept secret in Washington, and one that threatened to derail Biden’s third run for the presidency. His team took aggressive steps early in the campaign to halt media coverage of Hunter Biden’s extensive overseas business arrangements. In 2019, Biden deputy campaign manager Kate Bedingfield, currently the White House communications director, blasted the New York Times for publishing a quasi-critical piece questioning Hunter’s multimillion dollar paycheck from Burisma and his father’s efforts as vice president to stop the Ukrainian government’s inquiry into the corrupt energy company, calling it a “baseless conspiracy theory.”

In a scorching memo to the media in January 2020, Bedingfield and Antony Blinken instructed reporters about how to cover Trump’s (correct) allegations regarding VIce President Biden’s successful demand in 2015 to fire a Ukrainian prosecutor investigating Burisma.

“[To] artificially prop-up these egregious lies based on the ‘principle’ that if partisans make accusations, they have to be treated as legitimate regardless of the facts, is to make you an enabler of misinformation,” Bedingfield and Blinken wrote. Reporters who did not follow their demands were guilty of “malpractice,” the pair warned.

In other words, Team Biden was prepared to go to the mattresses to protect the candidate and his family from any negative news coverage prior to Election Day—and that meant once again leveraging powerful federal agencies and Democratic lawmakers to play along.

Anticipating ramped up coverage on the Right as well as the issuance of a long-awaited Senate report detailing the Bidens’ grift, Democrats and their government apparatchiks swung into action. To do so required a cut-and-paste job involving the same bad actors responsible for Russiagate in 2016.

House Speaker Nancy Pelosi (D-Calif.) set the table with a letter to FBI Director Christopher Wray in July 2020. Pelosi requested a briefing “regarding foreign efforts to interfere in the 2020 U.S. Presidential election.” Congress, Pelosi claimed, was the target of an operation to “launder and amplify disinformation in order to influence congressional activity, public debate, and the presidential election in November.” The letter was similar in tone to one sent by House Democrats to James Comey in August 2016 asking the FBI to examine possible ties between Trump and Russia to interfere in the 2016 election.

In September 2020, Wray claimed during a congressional hearing that the Russians were interfering in the election to “denigrate Vice President Biden” by using “misinformation campaigns” to confuse the electorate. A week after the Post published its first article in the series, Wray said in a statement that the FBI was “coordinating with the private sector—both technology and social media companies—to make sure that their platforms are not used by foreign adversaries to spread disinformation and propaganda.”

That same month, more than four dozen former intelligence experts signed a letter declaring the Post’s release of Hunter Biden’s emails had “all the classic earmarks of a Russian information operation.” The officials further explained that they did not know “whether these press reports are accurate, but they do suggest concern within Executive Branch departments and agencies that mirrors ours.”

And that gave Biden all the leeway he needed to discredit the Post’s expose—which leads to the absurd claim the “government” had nothing to do with suppressing the Hunter Biden story.

Joe Biden has been one of the most influential politicians in Washington for five decades, between his long stint in the Senate, where he served as chairman of powerful committees, then eight years as vice president. He floated the idea of running for president shortly after he left the White House in 2017, nearly clearing the field of serious contenders.

Biden and his loyalists—from Brennan and Clapper to Baker—acted as a government in exile of sorts, still controlling all the levers of power without the titles. No one can argue with a straight face that Donald Trump had any handle on the FBI or national security apparatus, let alone thousands of bureaucrats politically aligned with Biden and Barack Obama in Washington, D.C. And the media relied on these “former” federal officials for years in a classic appeal to authority, forcing the public to accept their anti-Trump rants as an act of good faith rather than the subversive operation it was in reality.

Further, evidence now proves that the FBI colluded with Big Tech companies before the 2020 election to run interference for the Bidens. Elvis Chan, also a figure in Russiagate as I explained here, admitted to conducting weekly meetings with Big Tech corporations including Twitter before Election Day. Agents sent social media companies lists of sites and accounts to remove under the ruse of election “misinformation” with follow-up contact to make sure orders were followed.

Who gave those marching orders? James Baker, who undoubtedly holds tremendous sway in the bureau he once helped lead? Nancy Pelosi, who represents most of Silicon Valley in Congress? Joe Biden himself? After all, he was the expected winner of the election. Everyone in Big Tech and Washington was ready and eager to please.

It is folly to think simply because Biden, his campaign advisors, and former Obama White House staffers didn’t wear official government titles in 2020 that they somehow couldn’t run the government side of the operation to censor the laptop material. Power in Washington is for the lifers like Biden, not elected outliers like Trump—anyone who argues otherwise is either desperately naïve or intentionally dishonest.

Julie Kelly is a political commentator and senior contributor to American Greatness. She is the author of January 6: How Democrats Used the Capitol Protest to Launch a War on Terror Against the Political Right and Disloyal Opposition: How the NeverTrump Right Tried―And Failed―To Take Down the President. Her past work can be found at The Federalist and National Review. She also has been featured in the Wall Street Journal, The Hill, Chicago Tribune, Forbes, and Genetic Literacy Project. She is the co-host of the “Happy Hour Podcast with Julie and Liz.” She is a graduate of Eastern Illinois University and lives in suburban Chicago with her husband and two daughters.
Photo “Barack Obama and Joe Biden” by The White House.