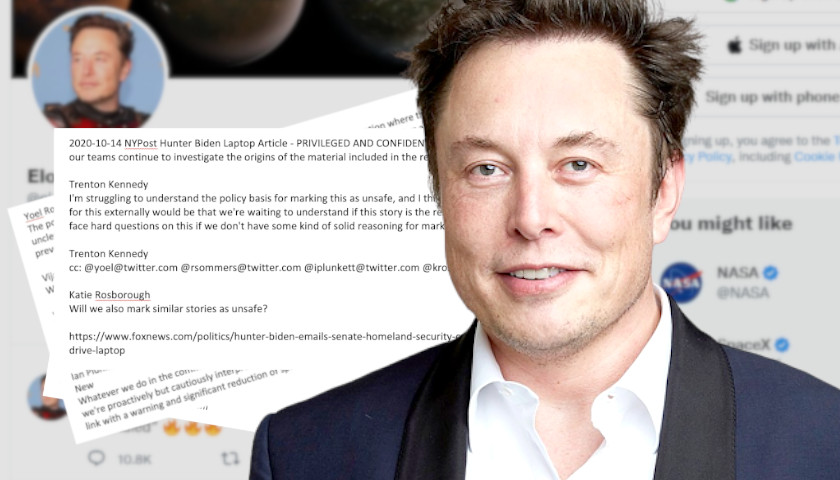 Late Friday, Matt Taibbi used the Twitter platform to publish numerous tweets devoted to the site’s internal deliberations regarding the Hunter Biden laptop story that most major media suppressed during the 2020 election.

The story, which is what it was, is based on documents obtained from the platform’s new owner and is a marketing coup that will drive traffic to the site. It confirms just how savvy Elon Musk, the world’s richest man, is.

Think about it. Millions of people are spending Saturday morning reading Taibbi tweets with their morning coffee. With the promise of still more to come, traffic on Twitter is going to soar. That’s good for the stock price, which is good for the man who owns the company and who retweeted it all. Just in case anyone wasn’t following Taibbi.

People didn’t know what to think when Elon Musk announced he’d acquire Twitter. His stated goal, the preservation of free speech online, makes him a friend to journalists. It doesn’t make him a conservative – anti-left is good enough for now – but no one should mistake him for a white knight atop a charging steed. He’s a businessman who knows how to make risks pay off.

As to what Taibbi writes about, we’re told there’s more to come. What’s been released thus far is disturbing. The close relationship between platform executives, politicians, partisan spin doctors, and federal law enforcement officials hinted at in the now-public messages seems an alarming abuse of what political scientists call “soft power.”

The use of relationships to bring about desirable results, even informally, is not new in politics. It happens all the time, like when Donald Trump dined with James Comey and mentioned to the now-former FBI director that he thought newly-resigned National Security Adviser Mike Flynn was a good guy on whom the government should go easy.

When news of that conversation leaked, official Washington erupted. Like gambling in Casablanca, such things are officially prohibited — as Inspector Renault reminds the Café American’s Rick Blaine right before the croupier hands the gendarme his nightly winnings.

How shocking it must be to them to learn FBI officials met regularly with senior platform executives in the weeks before the 2020 election to warn them of possibly discrediting Russian disinformation showing up online.

It’s easy to see how some people working at Twitter might have found that advice intimidating. Even if they didn’t, it gave them an excuse – most of them reportedly being progressive-minded and personally backing Joe Biden over Trump – to suppress anything that popped up on the platform casting a shadow on the former Vice President.

It’s not the same thing as Nixon trying to get the CIA to tell the FBI to back off from its investigation of the Watergate break-in on the grounds of “national security.” It is close enough to be a kissing cousin, though, and that’s disturbing.

Unless something exculpatory emerges, Congress needs to step in – but not to investigate Twitter, a private company that’s allowed to publish (and not publish) what it wants. What it should do is undertake a long-overdue investigation into the Justice Department and the FBI and how they act and interact with the American political system. They’ve gotten too much wrong in the last two decades – starting with the wrongful conviction of the late Alaska Sen. Ted Stevens – for them to be allowed to go on with business as usual. Someone has some explaining to do. It’s about time they were asked to do it.