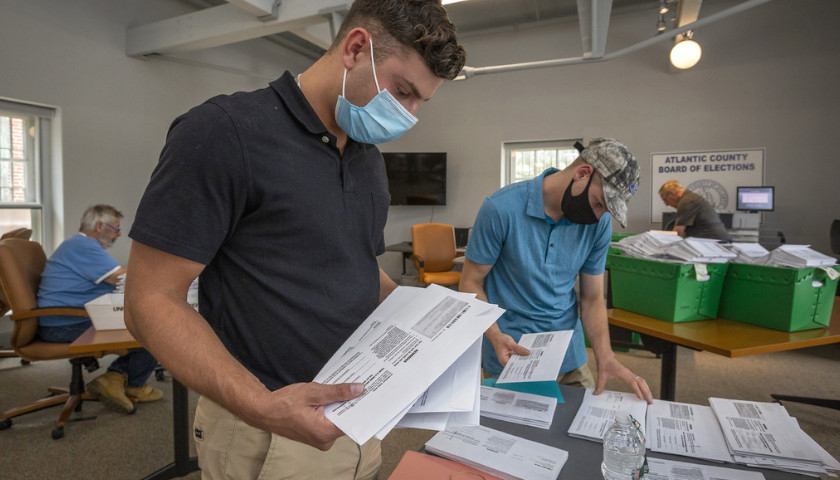 As the deadline for Arizona counties to certify the 2022 midterm election passed on Monday, Maricopa County certified while residents urged them not to, one county chose not to certify despite the threat of a lawsuit, and another certified with two supervisors voting “under duress.”

Secretary of State Katie Hobbs, the Democratic candidate who won the Arizona gubernatorial election by less than a percentage point, filed the lawsuit because Cochise County “failed to fulfill its mandatory duty to meet and approve its canvass of the results of the 2022 General Election by the statutory deadline of November 28, 2022,” according to the filing. “[T]his duty is not discretionary,” the lawsuit adds.

Democratic election lawyer Marc Elias tweeted about a lawsuit his law group filed against Cochise County on Monday for not certifying its election results. The plaintiffs in the case — the Arizona Alliance for Retired Americans and an Arizona voter — “allege that this failure to perform the ‘ministerial and mandatory, not discretionary,’ task of canvassing the county’s election results violates ‘the plain statutory text’ of Arizona election law.”

Mohave County voted unanimously to certify the election. However, two of the supervisors on the county board did so “under duress.”

“I vote ‘aye’ under duress,” Mohave County Supervisor Ron Gould said while casting his vote. “I found out today that I have no choice but to vote ‘Aye’ or I will be arrested and charged with a felony. I don’t think that that is what the founders had in mind when they used the democratic process to elect our leaders.”

If the county failed to certify the election on Monday without any ballots outstanding, then the county’s election would be invalidated, the board’s legal counsel said, according to a local news outlet reporting on the county’s certification. This could constitute malfeasance of office by county officials, a Class 2 misdemeanor.

“Arizona — and that is Maricopa County — is the laughingstock of the country and the world,” said Mohave County Supervisor Hildy Angius during the certification. “And they don’t even seem to care, which is even more frightening. I will vote to certify this canvass under duress for the chaos Maricopa County has forced into our election process.”

Meanwhile, the Maricopa County Board of Supervisors unanimously voted to certify the 2022 midterm election on Monday after an hours-long meeting where residents explained the irregularities they witnessed on Election Day.

The board’s meeting lasted over four hours as members discussed the administration and management of the midterm election on Election Day. While the county acknowledged that there were some issues on Election Day, they insisted that the election was “safe and secure.”

During the public comment part of the meeting – which lasted about an hour and a half, residents and included voters, poll workers, and poll observers – each had two minutes to voice their concerns about certifying the election due to issues they experienced or witnessed on November 8.

“Voters this cycle have in fact been disenfranchised,” poll worker Mike Peterson told the board.

“At my poll center, where we literally had, at 7 p.m. on Election Day, 675 people waiting in line,” Peterson said. “Of those 675 people, do you know how many people came in? A hundred and fifty. It means that you have personally disenfranchised voters. They have came, they have seen, and they have given up because they know what is going on.”

Maricopa resident Sharon Huber said during public comment that she had tried multiple times to get her ballot to be scanned, but ultimately had to put it in Door 3.

“I was a poll worker a number of times under different secretary of states and recorders,” she said. “We never had problems, not like this.”

The Arizona attorney general’s office raised concerns regarding the administration of the November 8 election in Maricopa County in a November 19 letter to the county attorney’s office inquiring into the widespread irregularities reported in the county on Election Day. The letter gave a deadline of November 28 for the county to respond.

On Sunday, the county replied to the letter, saying that it followed the law on Election Day and “experienced unanticipated printing problems in 31% of its vote centers.”

The county explained that some printers printed ballots that made them unreadable by ballot scanners but claimed, “When compared to the total number of voters who participated in the 2022 General Election, fewer than 1% of ballots cast were affected by these printer issues.”

Thomas Liddy, the county’s chief civil division attorney, said in the response letter that the Election Day problems were “regrettable” but “every lawful voter was still able to cast his or her ballot. No voter was disenfranchised because of the difficulty the county experienced with some of its printers.”

According to an affidavit report by Mark Sonnenklar, a roving attorney with the Republican National Committee’s Election Integrity program in Arizona, he and 10 other RNC roving attorneys reported their observations and those of Republican observers at vote centers on Election Day.

The 11 attorneys visited 115 out of the 223 vote centers in Maricopa County on Election Day and found that 72 of them (or 62.61%) “had material problems with the tabulators not being able to tabulate ballots,” Sonnenklar reported, “causing voters to either deposit their ballots into box 3, spoil their ballots and re-vote, or get frustrated and leave the vote center without voting.”

The 72 vote centers that reportedly had issues out of the 223 is more than 31% of the county’s total vote centers.

When reached for comment on the letter, the attorney general’s office told Just the News on Monday, “We have seen the county’s response, and we are reviewing it.”

Arizona GOP Chairwoman Dr. Kelli Ward tweeted on Sunday in response to the county’s letter: “Maricopa County basically tells AG’s office to pound sand. They just don’t have time to address disenfranchised voters. These people are a disgrace. Will the #ElectionIntegrity Unit sit back and take this? Or will they demand more than excuses?”

An update on our Fight, Arizona: pic.twitter.com/tXrjrTFDc8

Lake noted that it “took two weeks to count” the ballots in Maricopa County’s election.

Natalia Mittelstadt is a reporter at Just the News. Mittelstadt graduated from Regent University with Bachelor of Arts degrees in Communication Studies and Government.

Reprinted with permission from Just the News.