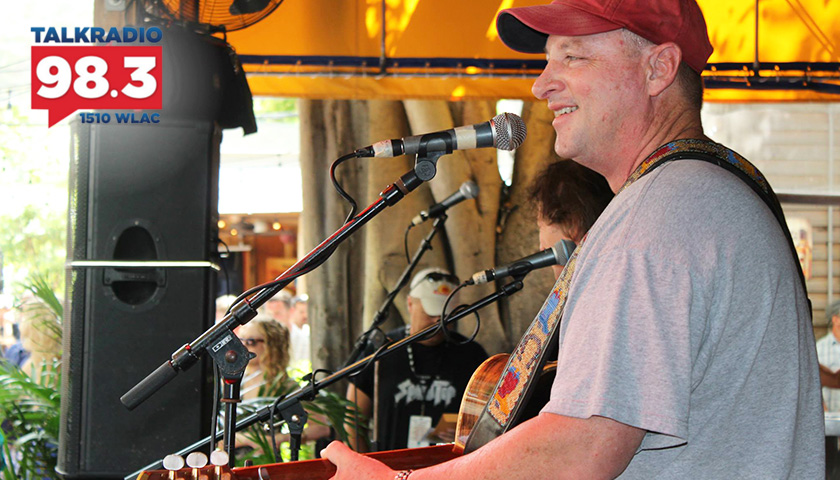 Live from Music Row, Friday morning on The Tennessee Star Report with Michael Patrick Leahy – broadcast on Nashville’s Talk Radio 98.3 and 1510 WLAC weekdays from 5:00 a.m. to 8:00 a.m. – host Leahy welcomed legendary Christian music country artist, Gary Chapman in studio to talk about how he writes songs and reminisce about how the song Tender Tennessee Christmas came to be.

Chapman: Thank you. It is a pleasure to be here. And that’s my usual angelic intro music.

Leahy: There you go. That’s exactly what it is. I’ve been teasing this for all the program here, but your music has played a very important influence in my life. And in fact, I think you could argue your music really brought me to where we are right now, to this studio.

Leahy: And I’ll tell you the story. Are you ready?

Leahy: So in November of 1989, my wife and I were living in Sonoma, California, and she was expecting our first child. And California is a little weird.

Leahy: My wife and I heard the song in Sonoma, California, and we looked at each other and said, I think we need to move to Tennessee.

Leahy: Really. Seriously. And so we ended up moving here. It took us a while, but in May of 1991, we moved to Nashville. And about a year, about six months later, I met Crom, because I was listening. I didn’t know anything about Tennessee or Tennessee politics.

There was a show, you remember Teddy Bart’s Roundtable and Crom Carmichael was the builder of the edifice of logic on that show. (Chapman chuckles)

And I would listen to it, and I share the other people and say, what are they talking about? This guy Crom, I know what he’s talking about. So I called him up and said, let’s have lunch. And we’ve been friends ever since.

Leahy: And my wife is from Texas. She went to Adeline Christian and had lot of friends here at the Church of Christ. And so, you know, and then we ended up going to church at Woodmont Hills when Ruby Shelley was there.

Chapman: I remember it well.

Leahy: I heard Rouble speak and I said, yeah. Oh, yeah, this is where I’m going to this is my spot. So, thank you, Gary Chapman. Now, the story is, as I read, you and your former wife, Amy Grant in 1983 we’re driving down Franklin Road. This is a story that I read. I don’t know if it’s true.

Chapman: I’ll fix it for you.

Leahy: Okay, fix it. (Chapman laughs) So you’re driving down Franklin Road and you started writing this song about a tender Tennessee Christmas, is that right?

Chapman: The true story is Amy’s mom and dad had a condo on Lido Beach for years. That was kind of the family place. The destination. This is back when you actually drove to Florida. You’d drive down there, and we were headed down there, and I was prone to let’s just drive overnight, I’ll be fine.

And we were headed down and we were sneaking up on Suwannee. Look Out. That whole space. It was a full moon night, and the way that the moonlight was hitting the bluffs, it looked like it had snowed. And I was like, you know what? This is as inspiring as it gets. The idea had already started.

Leahy: That’s a beautiful part of the country. So who was driving? You or Amy.

Chapman: I was driving.

Leahy: So you’re driving. So you start writing. The lyrics of this song are just spectacularly good. You know that.

Chapman: Well, I appreciate that. Every now and then, one of them sticks out.

Carmichael: Now, I have a question for you. When you’re writing a song and you’re writing the words, when does the music start working through your head?

Chapman: You know what? I would love to be able to answer that question, and I can’t.

Carmichael: Do you write the music as well as the words?

Chapman: I start with the words. Obviously, we’re driving down the road. It was difficult.

Leahy: Is Amy there? Was she writing it down? Back and forth. How are the lyrics come about?

Leahy: Did you just talk it?

Chapman: My logic has always been it’s like if you have a great idea and you go, good grief, okay, it’s gone. What was it? What was it? I would think I’m getting old, which obviously I am, but I’ve been this way since I was 17, so that’s not it. My logic all along has been, if it’s good, it will come back. And that’s the way I am with lyrics.

Leahy: You’re driving. When did you start writing down the lyrics?

Chapman: Probably when we got there.

Leahy: Did you, like, go right to the pen and paper?

Carmichael: How long does it typically take once you are inspired by an idea.

Leahy: This is going to be a hanging chat because we’ll come back to it after the break.