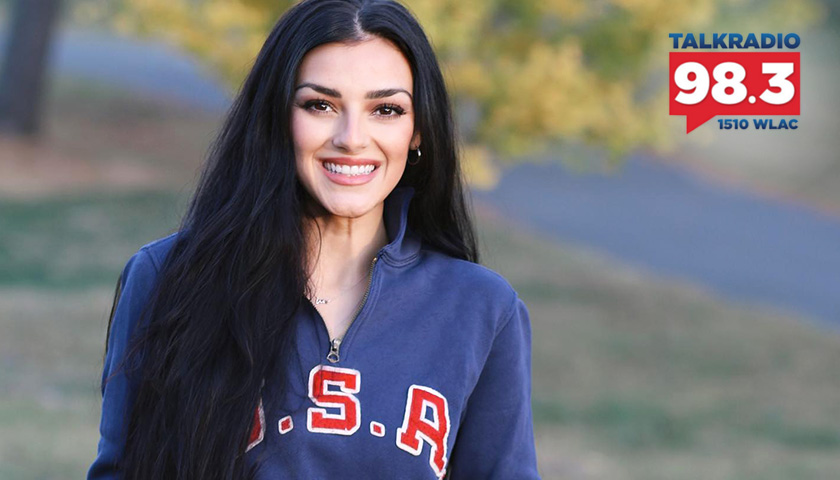 Live from Music Row, Friday morning on The Tennessee Star Report with Michael Patrick Leahy – broadcast on Nashville’s Talk Radio 98.3 and 1510 WLAC weekdays from 5:00 a.m. to 8:00 a.m. – host Leahy welcomed new country singer-songwriter, Alexis Wilkins, in studio to talk about the business side of the song STAND, making the top 10 on iTunes, and staying true to herself.

Leahy: That’s a new release. STAND, by country artist Alexis Wilkins, who is in studio with us. She is a conservative, who is, you know, in her twenties, a Belmont graduate, still a conservative. Survived Belmont. Very impressive.

Leahy: You’re on the web at alexiswilkins.com. Now you were telling me about the business side of STAND. Did you release that last week?

Wilkins: Yes. So we released that exclusively on Rumble and True Social on November 3rd and then everywhere on November 4th.

Leahy: And how’s it done?

Wilkins: It’s been great. It’s been really great. The response has been pretty overwhelming for just me believing in the song and releasing it. I’m glad that it hits people the same way that it affects me, honestly. We broke the top 10 with it, which is great.

Leahy: You said we broke the top 10 with it. What is that exactly? The top ten of what?

Leahy: How many other independent artists were in the top 10?

Wilkins: I think it was just us.

Leahy: Just you. Yeah. What’s the secret to your success besides the fact that this song is great and your voice is great?

Leahy: I’m hearing that the music labels here in Nashville are A, woke, and B, run out of Los Angeles. Are both of those things true or partially true? What’s the deal?

Wilkins: I’ve seen a lot of carryover from pop into country on both the music and the business side. I don’t know exactly what’s going on there, but you can see kind of the shift even in just the way that country music sounds. That’s what I’ve observed.

Leahy: I’m kind of a classic guy, right? I like Johnny Cash. I like Patsy Cline. I like Loretta Lynn. I listen to country music today and I don’t recognize it. It’s like, I don’t know, guys in skinny jeans being politically correct, sounding like Taylor Swift. I’m exaggerating. But Patrick, our producer, is a musician. He’s a drummer.

Leahy: He’s looking, and he’s laughing at me because, for somebody who doesn’t know music, I think I may have probably nailed it on that part. How do you go about succeeding as an independent without a label? Did you ever talk to a label? What do they say?

Wilkins: I’ve been in town a long time, and so you know people and you see things, and I just have always been really intentional about knowing who I am. Whether you’re walking into the room of a label or you’re walking into a writing room, knowing who you are as an artist is one of the most important things and so is your own identity and really carrying that through.

Leahy: So you’re politically conservative, and to me, again, not a music expert, but you sound more like the classic country to me.

Wilkins: Thank you. I appreciate that.

Leahy: When you go into a meeting with these labels, right? Is there a guy with skinny jeans and sunglasses looking at you like, who are you? (Wilkins chuckles) What are these meetings like?

Wilkins: It’s funny because in the last couple of years, especially with, fortunately, and unfortunately, the social media side of things, you can reach audiences so much easier whether you have a label or not.

Leahy: Do you think is there any label in town that would say, hey, we’d like a conservative-oriented, classic country female artist? Are they lining up to, say, sign her up?

Wilkins: You know, we’re seeing people represent their American values just as a baseline. And so I’m not sure. I hope that honestly, things get less political in the music world. I think that what we need is less division.

Leahy: That’s what you hope? You know what? I don’t think so. I think it’s going to get more political. But again, I’m just looking at it from the outside.

Wilkins: We’re in the back half of the two years leading to elections, so I think that you’re probably correct.

Leahy: Yes. If people want to listen to you and hear you live, how do they find out where’s your next performance?

Wilkins: And so we have the running list of dates there. I know that I have some coming up in Detroit and Indianapolis, Memphis, and, I think, Birmingham, but I need to check on that. And then my social media is all Alexis Wilkins. You can go to Alexis Wilkins Merch for STAND merchandise.

Leahy: Who runs your social media? Do you do that?

Wilkins: I do that.

Leahy: You do it all yourself? That’s exhausting.

Wilkins: I know. My mom helps me. She’s better at marketing than I am. She has a marketing background. And so I’ve kind of been like, hey, will you help me? Because social media, it is something else. But no, she helps a lot with that because I get over it.

Wilkins: Well, recently, Rumble did the exclusive release on STAND and True social. They’ve been incredible. The team over there has just been really great.

Leahy: Do you know Devin Nunez?

Leahy: Yeah, he’s good. So that’s good. So he’s got a really good team at True Social. He’s been here in our studios a couple times. Good guy. And so that’s good. How about the guys at Rumble?

Wilkins: Rumble has been fantastic. We’ve been working with some of the people over there. And I know that they had STAND on the front page of Rumble during the release. They’ve been fantastic.

Leahy: Has Elon Musk been calling you for Twitter? (Wilkins chuckles) There’s new ownership there.

Wilkins: Oh, man, there’s so much dust settling right now in the social media space. And it’s funny because before True Social and Rumble came along, I was more Instagram-heavy, just because that was where most of my interaction was and also Facebook. And so now that Twitter is under new leadership, I’m interested to see how things kind of shake out.

Leahy: Have they reached out and said, hey, Alexis, we want to promote classic country conservative stars?

Wilkins: Not Twitter. No, not directly. I think they have bigger issues over there to sort out.