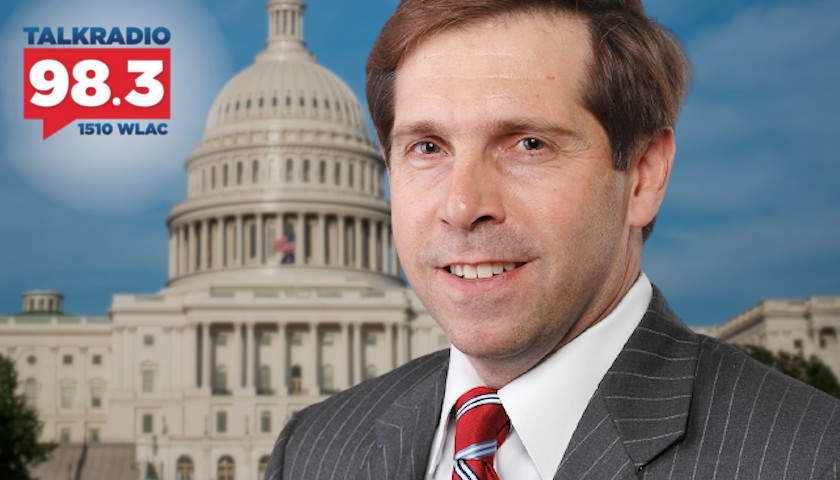 Live from Music Row, Wednesday morning on The Tennessee Star Report with Michael Patrick Leahy – broadcast on Nashville’s Talk Radio 98.3 and 1510 WLAC weekdays from 5:00 a.m. to 8:00 a.m. – host Leahy welcomed Congressman Chuck Fleischmann to the newsmaker line to celebrate his massive victory in the midterm elections despite a national red trickle, and express his optimism moving forward.

Fleischmann: Michael, good morning, sir. How are you all?

Fleischmann: Yes, sir. And the later numbers came in. They’re even better. We had some counties where we got 80 percent of the vote, so we’re going to end up around 68 or 69 percent. Very positive.

Leahy: Very good. 68 to 30 overall. And you represent a number of counties. The biggest county is Hamilton County. Chattanooga did very well there as well. You got 58 percent of the vote in Hamilton County. It’s a pretty good showing.

Fleischmann: Thank you. Yes, this was my seventh term. This was my best night ever. The new 3rd district – of course, our whole state was redistricted which gave me all of Bradley County, which was wonderful. That’s where Cleveland, Tennessee is.

But it’s a solidly Republican county of 110,000 people. Hamilton has 350. But even my county is on the Kentucky border, Scott County, where I got 88 percent of the vote. So very thankful to the good, solid, conservative, God-loving, American-loving people in the 3rd district of Tennessee, and I would say across the great state. We all had a good night.

Fleischmann: Yes, sir. A lot of miles, a lot of wonderful people. And now it’s 10 wonderful East Tennessee counties. They’re all unique. But we had some counties that I’ve had now for a decade – McMinn County, where we got 84 percent of the vote.

That’s just really heartening to me that people express their thanks and gratitude at the ballot box. And we saw that abundantly in the 3rd district yesterday. But a great day for Republicans.

We go from 72 to 81 now in our state. So I’m very, very thankful. And I’m going back to a subcommittee chairmanship waiting for me on the Appropriations Committee.

Leahy: It was supposed to be a red wave nationally.

Fleischmann: A lot of things happened. I think, we’re going to do our forensics, but Republicans did exceedingly well in states like Florida and in New York, and then sadly, underperformed in some key states like Pennsylvania, and some of the western states like Arizona, where we thought we would have some pickups.

But I’m beginning to look at the results. Where we won, we won big: people like DeSantis, people like Sarah Huckabee, good, solid conservatives who have done well. But I will say this.

There were some races that I thought we would do better in across the country, where we came up a little bit short. Not a lot short, but in this game – unless there’s mail-in voting, which is a nightmare in some states that they’re implementing it – but in this place, second place is last place. So if you have 50.1 to 49.2, you’ve lost.

Leahy: So I’m seeing now, we were talking before, all the pundits were saying it’ll be a pickup of 30, 40 seats. Now it looks like you maybe pick up 10 to 15 seats. That’s kind of disappointing. I mean, you’ll have a majority, but not nearly the majority that you thought.

Fleischmann: Agreed, but I’m an optimist, and I’m going to say this. The first thing we had to do is fire Nancy Pelosi, because serving the last four years in the minority – prior to that, I’ve been in the majority. Michael, the minority in the House is a nightmare.

And our rules are set up, basically, that if you got more than them, and you saw that with Nancy Pelosi with a four- or five-seat majority, she crammed down our throats horrible legislation and teed it up for Joe Biden.

She won’t be able to do that anymore. So we’re going to have to play some tough defense now. I don’t know where the Senate is going to land.

I’ve been looking at those numbers. But the good news is we can block this radical left-wing Biden-Harris agenda, and then we’ll tee it up again and go at it in two years and hopefully regain more ground in the House and the Senate, and we’ve got to get the White House …

Leahy: So what do you think the final breakdown in the House is going to be?

Fleischmann: Clearly, Republicans will have the majority. Even the mainstream media and liberals are looking at the numbers. Let’s face it, I don’t think anybody had a great night, but we will have the United States House. My gut feeling is probably at least 10 seats.

Obviously not the night that I thought we would have, that great rolling night. We had it in the great state of Tennessee, and we had it in New York and in Florida and Arkansas and some other places. But there are a lot of bright spots all across America where Republicans won where they never won before, like in Texas.

Leahy: Okay, 2024. Donald Trump did not have a good night last night. Many of his selected candidates didn’t do well. Dr. Oz did not do well in Pennsylvania. He lost. He’s going to make an announcement this coming Tuesday.

It seems to me like there’s a lot of wind out of his sails. And the one who has the wind in his sails right now is Ron DeSantis. Is it too early to say – but to me, it may be time for a generational change at the top, and it might be DeSantis over Trump. Your thoughts?

Fleischmann: Great question. I’ve been, Michael, involved with politics since I was a teenager. I was one of those kids who was a political junkie. I liked sports and I liked politics. Both are very competitive and both are very important to me.

I noticed, and I’ve seen this before, politics is not a static dynamic. What I mean by that is, we don’t know … at one point in time – within a week, within a day, within sometimes a month – things can change.

So I think it’s a very fluid situation. I think we’re going to see a lot of posturing. I do believe probably President Trump will announce his re-election bid. We’re going to see how that plays. But the good news is there’s time now.

There’s time for the Republican Party to do some soul-searching, to look at all the candidates, and to look at the highlights where we’ve grown with Asians and Latin Americans and African Americans.

Our party today is not the party when I was elected 12 years ago. We have grown, we have gotten better, we have gotten stronger, and that is good. And then I point to the competition.

Obviously, that didn’t transfer in some of these races. But when it comes to ideas and protecting our freedoms and our great republic, when we do the forensics and when we look forward, I think clearly the Republican Party is in a much better place than it was.