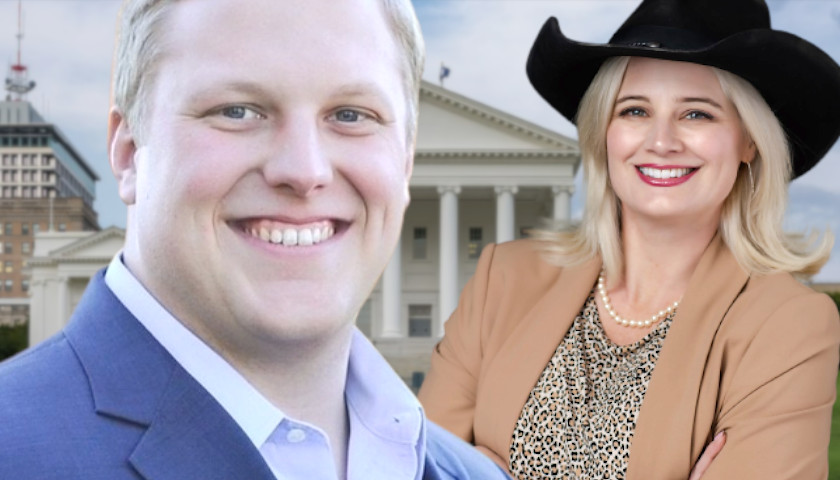 March told Fredericks, publisher of The Virginia Star, that she stays away from Williams. At the Saturday GOP fundraiser, she said the crowd went wild when she was introduced but Williams only got lackluster applause.

She said, “So I think that already had him agitated, but you know, he just kind of came barreling through the group of people I was with and slammed into me. And everybody kind of gasped. They were like, ‘Oh my gosh, oh my gosh, are you okay?'”

She said, “And he ran on through the building.”

Williams’ spokesperson provided surveillance video from the fundraiser; it’s difficult to see who is who or what happens in the grainy, low resolution, black-and-white video. The clip also includes video in a separate location showing March apparently demonstrating how forcefully she was pushed out of the way in the alleged assault.

In a statement accompanying the video, Williams said, “In the black-and-white clip, you can see me walk with my LA [legislative aide] and my wife towards the exit. Ms. March moves towards me, I move away from her and check back to see if she’s okay before leaving the building. In the color clip, we see Marie March doing what she always does: Lying and creating a spectacle out of nothing. The worst part is that she is lying to police and wasting their valuable time and resources.”

“There’s nothing, but she has exaggerated it to the point of, you know, just disbelief, and now she’s doubling down in saying that I’ve manipulated the video,” he told The Virginia Star Tuesday.

Bodycam footage obtained by Cardinal News shows Williams cautiously telling police, “I did not do anything intentionally to Marie March.”

Officers in the footage say that about seven people at the event corroborated March’s version of the story.

The Star asked Williams if he even brushed or touched March at all. He said that in the past he avoided getting on an elevator with March. On Saturday, he had been waiting to leave the event for a while but she and some of her supporters were standing in a doorway near the exit.

“There was an opening between someone and someone else,” he said.

“I proceeded towards that opening. I tried to not say anything to anyone because she can’t be trusted,” Williams said.

He said he’s looking forward to the November arraignment.

Editor’s Note: John Fredericks is the Publisher of The Virginia Star.