Commentary: America Is Barreling Toward a Cliff’s Edge Because of Democrats 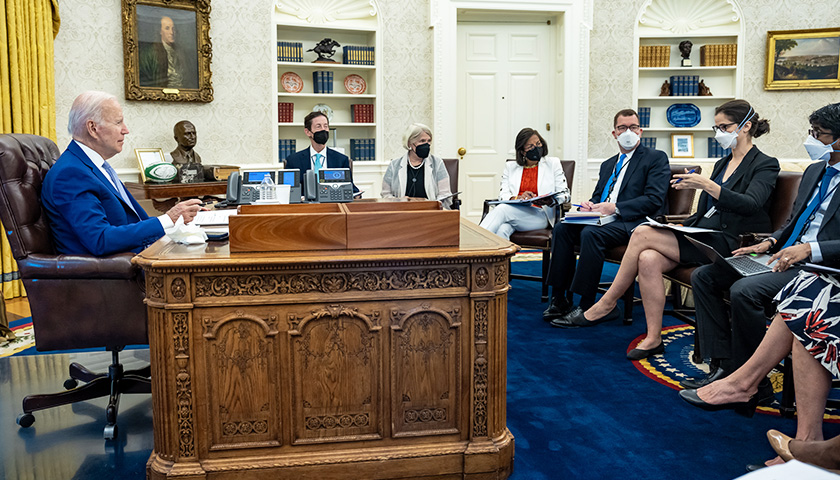 This November, Americans are facing a simple decision. Voters will choose between common sense and crazy, between affirming America’s values of freedom and prosperity or continuing the far-left’s plunge into lawless chaos.

Last week, Leader Kevin McCarthy released House Republicans’ Commitment to America, a plan to address the issues that matter most to voters — to create a strong economy, a safe nation, a free America, and an accountable government. Republican policies work and can deliver a brighter, more prosperous alternative to Joe Biden and Democrats’ record of high prices, surging crime and failed big government.

While Democrats launched historic inflation and crippled American energy independence, Republicans will deliver a strong economy. This starts with putting an end to Bidenflation: Democrats caused inflation with trillions in reckless spending, voted to raise taxes during a recession, and passed a bill allegedly aimed at curbing inflation which will likely make it even worse.

Instead, Republicans will put more money back into Americans’ pockets and boost small businesses by cutting costs, passing pro-growth policies, and incentivizing people to work with good-paying jobs. It’s the same policy playbook that created the red-state recovery, resulting in Republican states leading the way in recovering jobs post-pandemic.

And as Americans struggle to fill up their cars in Biden’s failed economy, Republicans will prioritize developing American energy to drive down gas costs while regaining the energy independence we achieved under former President Donald Trump.

Energy independence will make us less reliant on countries like China and Russia, which will help deliver the Commitment to America’s second goal: a safer nation. Biden’s disastrous Afghanistan withdrawal, refusal to hold China accountable for the COVID-19 pandemic, and efforts to revive the failed Iran nuclear deal have left us weak and vulnerable on the world stage.

Republicans will return to an America-first foreign policy that puts our global enemies on notice. At home, Democrats have delivered the highest murder rate in over 20 years and a raging border crisis that has flooded our neighborhoods with deadly fentanyl, which is the leading cause of death for Americans aged 18-45.

While Biden has refused to visit the border with more than 4.4 million illegal migrant crossings during his time in office, Republicans will tackle the border crisis head-on by prioritizing border security and giving Immigrations and Customs Enforcement and Border Patrol the support they need to defend our country. And as illustrated by a wave of law enforcement endorsements in Senate races around the country, Republicans will continue to be the party of defending and supporting our police.

Democrats have made gas and groceries more expensive and communities less safe. They have also failed our children with disastrous education policies — and they must be held accountable for it in November. When Democrats had a choice between school lockdowns and following the science, they chose to mortgage our children’s futures to appease far-left teachers’ unions.

That left us with a widened education inequality gap, lower test scores in math and reading, and a mental health crisis among teens. Republicans will put our children first by putting parents before teachers’ unions and giving them a voice in their children’s education. And by fighting for school choice while protecting women’s sports, Republican leadership will put our children in a position to succeed — not fall behind.

Ensuring a free America means providing choice in education while investing in our future.

Religious Americans in the military are under attack for refusing the COVID vaccine on religious grounds. Republican leadership would mean an uncompromising embrace of freedom of speech, religious liberty and defending the right to life without fear of violent reprisal.

A vote for Republicans is a vote for economic strength, safety from deadly drugs and violence, freedom in speech and education, and accountability for the far-left. It’s disappointing that one-party Democrat rule has so comprehensively failed to meet these basic obligations for the American people.

Luckily, elections are less than 50 days away: soon, Americans will have a chance to vote for House Republicans’ Commitment to America and get our nation back on track.

Ronna McDaniel is the chairwoman of the Republican National Committee.

The views and opinions expressed in this commentary are those of the author and do not reflect the official position of the Daily Caller News Foundation.
Photo “Joe Biden in the Oval Office with Advisers” by The White House.