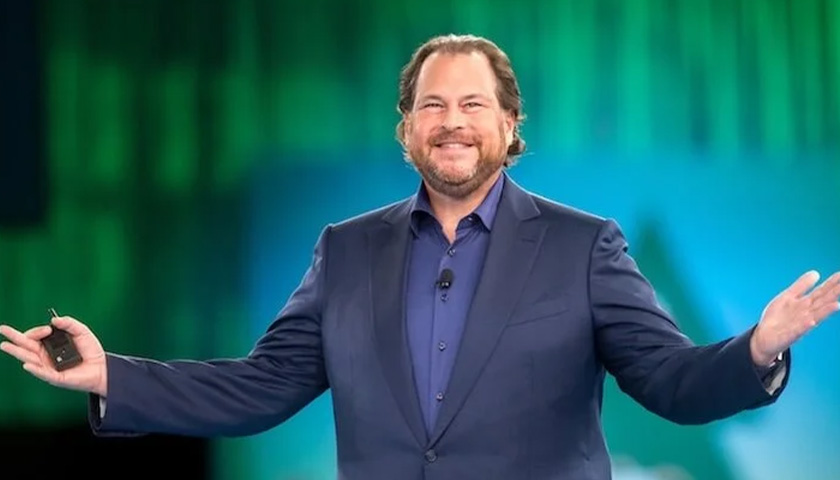 Salesforce CEO Marc Benioff said Friday his multinational software company may “exit” Republican states over anti-abortion laws. At the same time, however, Benioff through his business has investments located in China, a country that has engaged in human rights abuses.

“If you’re going to discriminate against our employees, we’re not going to set up shop there,” Benioff said Friday to a CNN anchor asking whether Salesforce is “considering” moving out of places “restricting or outlawing abortion.’”

Several red states have moved to outlaw or restrict abortion access after the U.S. Supreme Court overturned Roe v. Wade in June. Democratic lawmakers, liberal activists and corporations have condemned the decision. Even before the court’s decision, Salesforce informed employees it would pay employees’ travel costs to get abortions should the court overturn Roe.

This is not the first time Benioff has used his company to make a stand on liberal policies. In 2015, Benioff canceled Salesforce events in Indiana after then-Gov. Mike Pence signed a law giving people legal means to use religious grounds when they’re sued by LGBTQ people.

Salesforce reported on Aug. 24 that in the second quarter of fiscal year 2023 it produced $714 million in revenue in the Asia Pacific region, compared to over $1.7 billion in Europe and over $5.2 billion in the Americas. The Asia Pacific region, which accounts for Salesforce’s offices in Korea, India and other countries, including China, produced revenue growth of 31%, whereas growth across all countries was 26%.

In 2019, Salesforce partnered with Alibaba, making the Chinese tech company the sole provider of Salesforce software to mainland China, Taiwan and Hong Kong. Salesforce announced it was closing its Hong Kong office in August 2022 and “accelerating” its Alibaba partnership to optimize its “business structure to better serve the Greater China Region” as well as open “new roles while eliminating some others.”

Alibaba has clashed with China’s government — which slapped the company with a $2.8 billion antitrust fine in April 2021 after China’s market watchdog concluded Alibaba restricted merchants from selling its goods on other platforms. There has long been speculation that China forced Jack Ma, Alibaba’s former executive chairman, to step down over the perception he was stifling competition.

Beijing, where Salesforce has a China office, is located roughly 1,700 miles east of China’s government-run internment camps in the Xinjiang region. There are over a million Uyghur Muslims who have been detained in the camps since 2017 and subjected to forced labor and forced sterilization, according to the Council on Foreign Relations.

The U.S. State Department said in January 2021 China’s camps amount to “genocide,” while the United Nations (UN) in August 2022 released a report saying China has committed “crimes against humanity.” The UN report did not use the word genocide.

Michael Cunningham, visiting fellow at The Heritage Foundation’s Asian studies center, told the Daily Caller News Foundation it is “hypocritical” for Benioff to do business in China while threatening to pull out of Republican-led states over abortion policy disagreements.

“Whereas the governments of those ‘red states’ simply have policies that the CEO doesn’t agree with, China has serious, well-documented human rights abuses, which over the years have included widespread reports of forced abortions to enforce the country’s draconian family planning policies, as well as more recent reports of forced abortions and sterilizations being used by Beijing to control the Uyghur population in Xinjiang,” said Cunningham.

Salesforce did not respond to a request for comment.