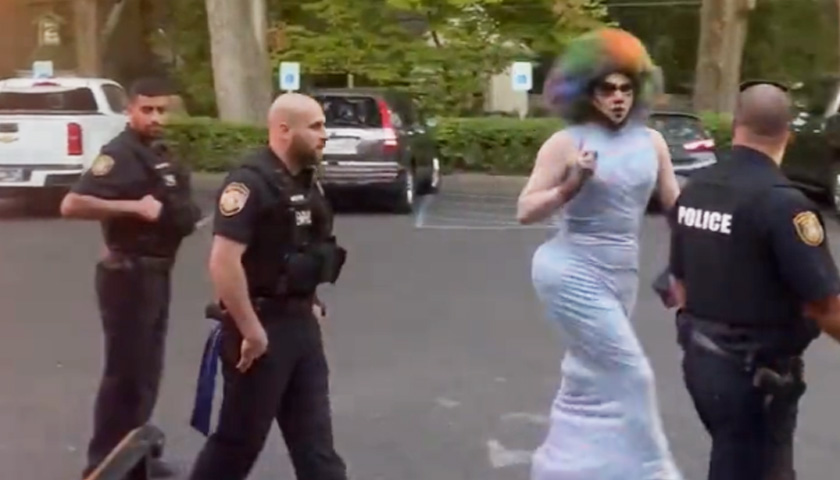 The Memphis Police Department (MPD) Monday confirmed that it did not shut down a drag show at the Memphis Museum of Science and History (MoSH), but that the museum canceled the event due to protests.

“Management of the Pink Palace chose to cancel all events [Friday], MPD Public Information Officer Theresa Carlson told The Tennessee Star. “MPD was asked to assist. No incidents occurred and no arrests were made.”

The Pink Palace is part of the MoSH.

A viral video circulating the web showed a drag queen outside the event, apparently arguing with police.

Memphis, Tenn.: The drag show for children & the “inter generational dance party” event at the Museum of Science & History was shut down for unknown reasons on Friday. Performers, attendees & social media left-wing activists are furious at the police. pic.twitter.com/rp4ZehX7Cl

Another video showed the protestors outside the event, as well as law enforcement keeping an eye on the activities of the protestors.

Protests underway at the Pink Palace Museum where a family-friendly drag show is taking place at 7pm. Heavy law enforcement here to make sure there are no issues. #memphis pic.twitter.com/0Huo5qtWEq

The Star reported about MoSH’s plan to host the event earlier this month.

“Presenting the Museum of Science & History’s grand culmination of our Summer of Pride programming and a celebration of the LGBTQ+ community, the FIRST EVER MoSH DRAG SHOW!” said an advertisement on the museum’s website. “This historic show will star a diverse cast of performers featuring different styles, expressions, and identities, showcasing some of the infinite ways in which we can manifest the art of drag. After the show, we’ll kick off our intergenerational dance party, where everyone is invited to come together and dance the night away. Join us for a night of art, music, dance, and community at the museum.”

The museum did not return a Monday comment request.

The topic of “family-friendly” drag shows, which often involve children, has become a hot-button issue.

Here’s another image of a kid at this “all ages”drag show pic.twitter.com/eUC7NeySwe

“This is what a ‘family-friendly drag show’ in a bar looks like,” the account said in July, posting a similarly crude video.

This is what a “family-friendly drag show” in a bar looks like pic.twitter.com/oTnLmdEkaZ

Pete D’Abrosca is a reporter at The Tennessee Star and The Star News Network. Follow Pete on Twitter. Email tips to [email protected].
Photo “Museum of Science & History Drag Show” by Andy Ngô.