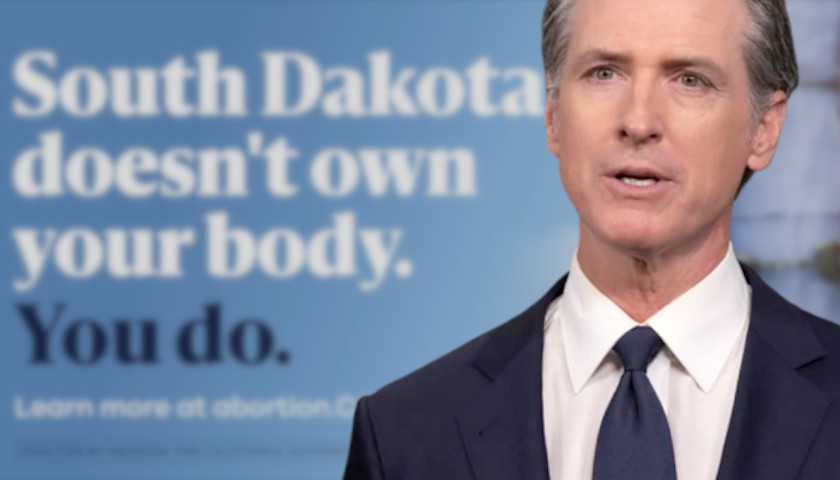 California Governor Gavin Newsom (D) has fired up a new billboard campaign within pro-life states that promotes his state’s embrace of abortion.

The governor, who is running for re-election, has rented billboards in seven states that have passed significant restrictions on abortion since the U.S. Supreme Court overturned Roe v. Wade.

The billboards, which are up in Indiana, Mississippi, Ohio, Texas, South Carolina, South Dakota, and Oklahoma, direct women seeking abortions in those states to “come to California.”

“Here is my message to any woman seeking abortion care in these anti-freedom states: Come to California,” Governor Newsom says, ramping up his attack on Republican leaders https://t.co/9JfoFNoz1A

“Here is my message to any woman seeking abortion care in these anti-freedom states,” Newsom said in a press statement last week, reported USA Today. “Come to California. We will defend your constitutional right to make decisions about your own health.”

“The idea that these Republican politicians are seeking to ‘protect life’ is a total farce,” Newsom added. “They are seeking to restrict and control their constituents and take away their freedom.”

South Dakota Governor Kristi Noem (R), who is also running for re-election, responded to Newsom’s ad that depicts an image of a handcuffed woman with copy that reads, “South Dakota doesn’t own your body. You do. Learn more at abortion.CA.gov.”

“In South Dakota, we are a destination for FREEDOM and LIFE,” Noem tweeted. “Now that you’ve run your billboards in SD, why don’t you get to work cleaning up the human feces on the streets of your cities and turning the lights back on. By the way, did you write this tweet in the dark?”

In South Dakota, we are a destination for FREEDOM and LIFE.

Now that you’ve run your billboards in SD, why don’t you get to work cleaning up the human feces on the streets of your cities and turning the lights back on.

By the way, did you write this tweet in the dark? https://t.co/WiiFGIQ3Sv

In October 2021, however, Newsom demanded all California schoolchildren receive the COVID-19 mRNA shots although children are the least at risk for COVID disease.

BREAKING: CA will require our kids to get the COVID-19 vaccine to come to school.

This will go into effect following full FDA approval.

Our schools already require vaccines for measles, mumps and more. Why? Because vaccines work.

This is about keeping our kids safe & healthy.

The Washington Post wrote Thursday its news outlet viewed the ads on the billboards “first.”

The billboards are funded by Newsom’s re-election campaign and tweets depicting the ads on the billboards are from the Twitter account of the campaign. In his tweets, Newsom addresses the governor of each pro-life state.

The ads direct women to a California state website titled “California abortion access” that states, “Abortion is legal and protected in California,” and invites women from other states to purchase their abortions in California.

@GovStitt this will be going up in your state. pic.twitter.com/snPcTIZaPv

The website also allows the user to find abortion vendors outside of California and telehealth abortion options.

“These ‘clinics’ may provide false, medically inaccurate information online or in person about abortion to convince you not to have an abortion,” the California website warns.

@henrymcmaster the people of South Carolina will be seeing these today. pic.twitter.com/cYPe21RUvl

Newsom defeated a 2021 recall campaign last year and, thus far, has dismissed speculation about a potential run for president.