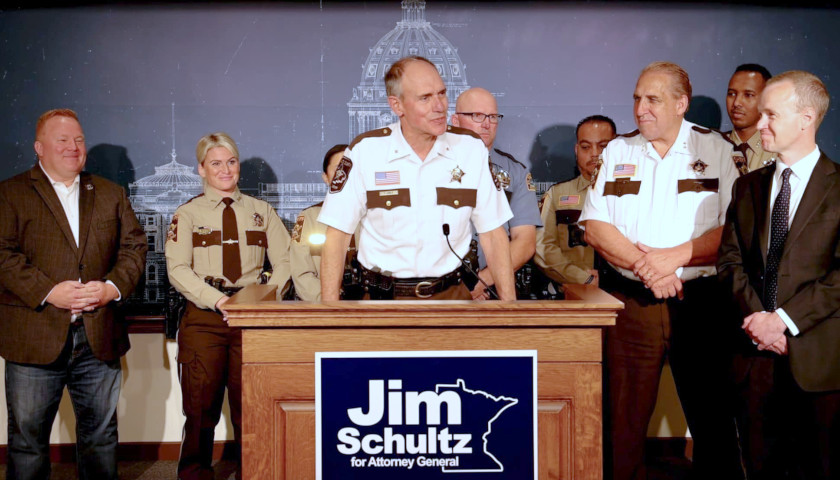 Jim Schultz, the Republican candidate for Minnesota attorney general, has received the endorsements of 22 county sheriffs throughout the state.

Schultz announced the endorsements at a Tuesday press conference, saying he is “beyond humbled” by the “unprecedented” show of support from law enforcement leaders.

“Over the past several months, I’ve been able to learn from these sheriffs about the specific concerns facing their counties and what the Attorney General can do to help them better protect their communities,” he said in a statement. “From the Twin Cities and surrounding suburbs to Greater Minnesota, our communities are hurting as a result of the failed leadership and reckless defund-the-police policies of Keith Ellison.”

Schultz continued: “As Attorney General, I will partner with our county sheriffs to make sure they have the tools they need to keep us safe. Together we will restore safety to our communities.”

After defeating Doug Wardlow in the Republican primary on Aug. 9, the political newcomer Schultz has surged over the past month to surpass Attorney General Keith Ellison in the polls.

According to an Alpha News/Trafalgar Group poll conducted last Wednesday, Schultz leads Ellison 49.3% to 45.7%, with 4.9% of voters undecided. Schultz’s 3.6% lead is above the poll’s 2.9% margin of error.

“Our current attorney general has been missing in action over the past three years while violent crime has skyrocketed in Minnesota. What’s more troubling, Keith Ellison wanted to eliminate the Minneapolis Police Department, further jeopardizing the safety of all citizens living in and visiting our state’s largest city. This election is about ensuring that crime in Minnesota is effectively prosecuted and that police have the resources they need to arrest serious violent offenders,” Fletcher said.

Schultz has vowed to be tougher on crime than the incumbent Ellison. His plan includes the appointment of new criminal attorneys to assist county attorneys, supporting the designation of carjacking as a specific crime, and imposing longer prison terms for repeat violent offenders.

The conservative outsider has not only criticized Ellison for his approach to violent crime and other hot button issues, but has even publicly criticized judges and prosecutors who impose weaker sentences or pursue lesser charges.

“If prosecutors are not interested in prosecuting violent crime, they’re going to have to find a new job,” Schultz said at a news conference back in July.

Ellison, meanwhile, recently opened a civil investigation into north Minneapolis businesses Merwin Liquors and Winner Gas, which have been the site of recent shootings and other unlawful activity.

On Monday, Ellison promoted his office’s involvement in the successful conviction of Freeborn County man Devin Weiland on three counts of attempted murder, including one count of attempted murder of a police officer. Weiland shot and injured Albert Lea Police Department officer Kody Needham when he fired 80 rounds during a Nov. 29, 2020 standoff in Albert Lea.

Ellison said the criminal division of the Attorney General’s Office has prosecuted 38 cases of violent crime across 22 counties since 2019. Both Ellison and Schultz support increased funding for the criminal division, but Schultz said he would reallocate resources from other divisions if the funding isn’t available, Axios reported.

Evan Stambaugh is a freelance writer who had previously been a sports blogger. He has a BA in theology and an MA in philosophy.
Photo “Sheriffs’ Endorsements of Jim Schultz” by Jim Schultz.