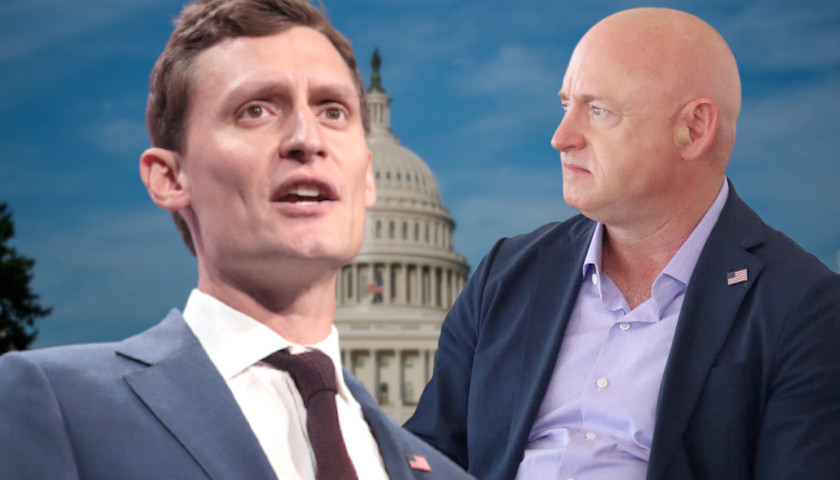 As Blake Masters pulls to within striking distance of incumbent U.S. Senator Mark Kelly (D-AZ), according to new polling by Trafalgar Group, the Frontiers of Freedom Action (FFA) Super PAC has jumped in to the Arizona media market to buy ads focused on opponent Kelly’s voting record.

The Arizona Sun Times asked Frontiers of Freedom President George Landrith, who also heads the FFA, why he thought the race was still winnable after Masters lost significant financial support. Landrith pointed to the gubernatorial race in New Jersey last year, where the Republican candidate, Jack Ciattarelli, was also a little-known newcomer like Masters, and written off by some in the Republican Party. Ciattarelli surprised everyone, losing by only 3.1 points in a very blue state.

Landrith told The Sun Times, “Even if you don’t think Masters is a perfect champion for your cause, look at the horrible things Kelly has done to the state.”

He said he believes the Biden administration and its Democrat-controlled Congress have been such a dismal failure that “[t]he Left should be afraid if they’re in a state where they won by less than 10 points.” Landrith sees Kelly as a senator who could have stopped many of Biden’s bills since the Senate is divided 50/50 down party lines, emphasizing Kelly’s votes against border security measures.

There are 1-minute, 2-minute, and 3-minute versions of the ad, which started running during morning and nightly newscasts in Arizona this week. FFA just doubled its initial purchase. While Landrith admitted he hasn’t spent hundreds of thousands of dollars on them, Landrith hopes to triple that amount soon.

The ads feature a lengthy list of Biden’s administration’s policies, which were accomplished with the assistance of his “key enabler” Kelly, a “liberal extremist” with “the voting record to prove it.” The ads point out that Kelly voted with President Joe Biden 94 percent of the time.

George Khalaf, managing partner of The Resolute Group, which is not representing Masters, told The Sun Times, “Hypocrisy is something Arizona voters won’t stand for. As an incumbent Senator, Mark Kelly has never eclipsed the 50% mark in polling because voters here understand that while he said he would be an Independent voice for Arizona, he has gone to DC and voted with the fringes of his party nearly 100% of the time.”

The ads criticize the mainstream media, stating that Kelly’s “free ride” from the national media means he never has to disown left-wing extremist groups that support him.

Landrith said the portion of the ads featuring “The Squad” — four far-left Democratic representatives, including Alexandria Ocasio-Cortes (R-NY-14) — is generating the most donations. On that portion, a voiceover is heard saying, “Mark Kelly made a corrupt bargain with left-wing extremists to not run a primary against him if he pushed far-left positions.”

Citizen Free Press labeled an earlier version of the ads “the greatest ad in the history of campaign ads” and added, “Every MAGA candidate should imitate its format.” Landrith believes the ad will be successful, saying, “Polling shows that even if they like their senators they will vote against them if they voted for Biden’s and the Democrats’ agenda.”

After Masters won the primary election on August 2, polls showed him trailing Kelly, with even a poll commissioned by his campaign showing him five points behind. At the beginning of August, the National Republican Senatorial Committee (NRSC) canceled $3.5 million in ad buys in the race. A member of Congress who prefers to remain anonymous told The Sun Times that had Arizona Attorney General Mark Brnovich won the primary instead, the NRSC wouldn’t have pulled the money. Later in August, the Mitch McConnell-linked Senatorial Republican Super PAC canceled ad buys for Masters worth nearly $8 million.

However, Sentinel Action Fund, a super PAC associated with conservative issue group Heritage Action for America, announced earlier this month it was putting $5 million into the race in ads and voter outreach. A recent poll from the Republican-aligned Trafalgar Group shows Masters only 2 points behind Kelly.

Democrats are still far ahead of Republicans with spending in this race. Democrats purchased $39 million in ad buys between September 12 and the November 8 election, compared to only $14 million from Republicans for Masters. As of July, Kelly had raised $54 million compared to Masters with $5 million.

Both former President Donald Trump and Masters’ former boss and mentor, Silicon Valley billionaire Peter Thiel, have not provided him with any financial assistance in the general election. Thiel spent roughly $15 million in the primary. The main PAC Thiel contributed to, Saving Arizona, spent $8.4 million during the primary helping Masters but only $225,000 attacking Kelly, none of it this month. Trump’s political action committee raised more than $103 million for candidates but appears to have invested only $5,000 in Masters.