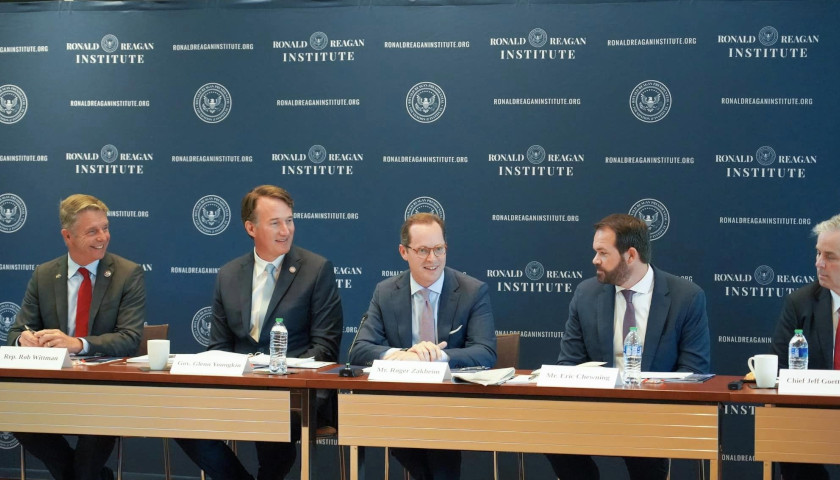 The Ronald Reagan Institute held a roundtable hosted by Governor Glenn Youngkin and Representative Rob Wittman (R-VA-01), and attended by others including Representative Elaine Luria (D-VA-02). The Monday event held at Mount Vernon is part of the organization’s national effort to dialogue with business leaders and elected officials about a report from its Task Force on Manufacturing Competitiveness.

On Monday evening Youngkin said in a statement, “The Commonwealth of Virginia holds a vital role in bolstering U.S. manufacturing competitiveness and it’s a key priority of my administration. I want to thank the officials and legislators who worked on the Reagan Task Force report and convened today to address our workforce shortages, industrial capacity, supply chain resilience, address any deficiencies and brainstorm solutions for the betterment of the Commonwealth. Virginia is home to important defense contractors and more have moved their headquarters to the Commonwealth in the last year. Together, we can grow the Commonwealth’s defense economy and enhance Virginia’s defense manufacturing capabilities.”

The event was closed to the public and a spokesperson declined to disclose what was said or who else was present.

Institute Director Roger Zakheim said in a Wittman press release, “Last year, the Reagan Institute convened a task force to tackle one of the biggest national security issues facing the United States: our domestic manufacturing competitiveness. That task force produced a series of policy recommendations in our report, ‘A Manufacturing Renaissance.’ To ensure both our economic prosperity and our national security, we must work across all levels of government and all sectors of society to maintain our competitive edge. Yesterday’s roundtable, which showcased an exceptional group of members of Congress, senior government officials in Virginia, policy experts, and leaders from defense and technology companies, helped connect these different key stakeholders and drive solutions.”

The report‘s executive summary highlights challenges including “dislocation in the work force” and “strategic competition” with China, noting that COVID-19 revealed the importance of manufacturing a supply chain for security.

The report states, “Our declining manufacturing competitiveness leaves America’s economic infrastructure and defense capabilities underprepared for geopolitical events, global competition, and even major armed conflict. To revive our manufacturing base and maintain our edge as the world’s leading economy, the United States must employ innovative thinking from both the public and private sectors,” the report adds.

“Virginia is uniquely critical to our nation’s security – for the Commonwealth, national security is economic security. All direct defense spending within Virginia has ripple effects across the entire Commonwealth’s economy. We must continue to prioritize innovation and competition to provide economic opportunities and growth for Virginians. This roundtable discussion was a crucial initial step toward working on a whole-of-government and cross-industry approach to ensuring Virginia remains a leader in manufacturing competitiveness, built on a strong and vibrant workforce. I look forward to the direct initiatives yesterday’s conversation will contribute to in the future, and I am grateful to the Reagan Institute, Roger Zakheim, Governor Youngkin, and all of the participants for joining this roundtable discussion,” Wittman said in his release.

Luria hasn’t issued a statement on the roundtable, but tweeted a photo of herself alongside Youngkin and Wittman.

“This morning, I joined a bipartisan roundtable discussion hosted by the Reagan Institute to examine how we can better support Virginia’s growing industrial base, increase the Commonwealth’s competitiveness, and continue our economic development,” she said on Twitter.

Eric Burk is a reporter at The Virginia Star and The Star News Network. Email tips to [email protected].
Photo “Glenn Youngkin” by Glenn Youngkin.