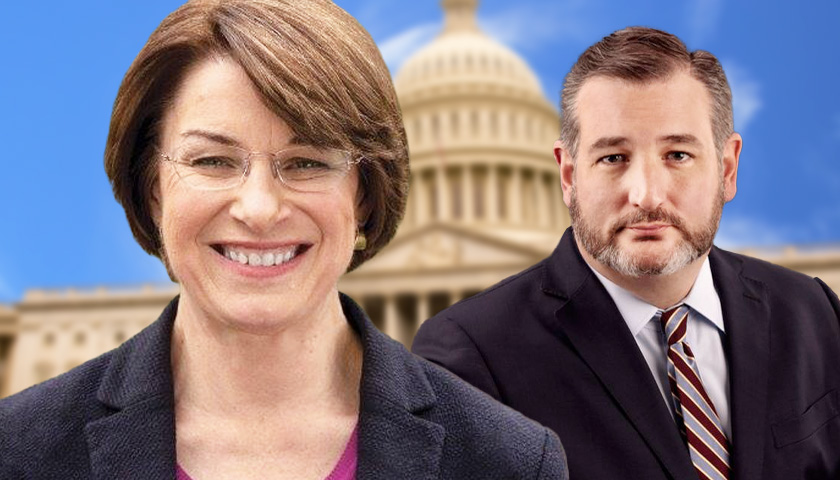 Sen. Amy Klobuchar has temporarily tabled a bill allowing journalists to negotiate with Big Tech companies on the distribution of their content after Sen. Ted Cruz added an anti-censorship amendment.

The Journalism Competition and Preservation Act of 2021 (JCPA), first introduced by Klobuchar in March of last year, “creates a four-year safe harbor from antitrust laws for print, broadcast, or digital news companies to collectively negotiate with online content distributors (e.g., social media companies) regarding the terms on which the news companies’ content may be distributed by online content distributors.”

Some analysts of the bill have argued that the primary beneficiaries of the JCPA would be mainstream media companies, given their collective power to collaborate with each other and exclude other media outlets based on ambiguous criteria.

An amendment to the bill introduced by Cruz limited the negotiations to “fair payments for their content” only, not content moderation, according to Breitbart.

The amendment was included after passing the Senate Judiciary Committee by an 11-10 vote.

At a Thursday markup hearing just prior to the vote, Klobuchar tried convincing Sen. John Kennedy of Louisiana, the bill’s top Republican co-sponsor, and other Republicans to not support Cruz’s proposed amendment against discussions of content moderation.

But Kennedy replied, per Breitbart, that he thought the anti-censorship amendment explicitly brought out what he thought was already implicitly included. When the amendment passed, Klobuchar “immediately” pulled the JCPA from the proceedings.

“This was a surprise, this is a long-negotiated bill,” the senator from Minnesota lamented.

Cruz told Breitbart that Klobuchar’s tabling of the bill represented a “huge victory for the First Amendment and free speech.”

“Sadly, it is also a case study in how much the Democrats love censorship,” he added. “They would rather pull their bill entirely than advance it with my proposed protections for Americans from unfair online censorship.”

Some in the tech industry also praised the outcome, according to the Washington Free Beacon.

“Despite the name, the JCPA does not include provisions that will stimulate competition or thwart media conglomerates from hollowing out journalist jobs,” Joshua Lamel, executive director of Re:Create, said in a statement. “Moreover, the JCPA still undermines constitutional rights to free speech and free press and establishes copyright loopholes that will dismantle the free flow of information on the internet.”

Evan Stambaugh is a freelance writer who had previously been a sports blogger. He has a BA in theology and an MA in philosophy.
Photo “Amy Klobuchar” by Amy Klobuchar. Photo “Ted Cruz” by Senator Ted Cruz. Background Photo “United States Capitol” by David Maiolo. CC BY-SA 3.0.