Commentary: John Podesta’s Ties to Dem Megadonor Back in Spotlight 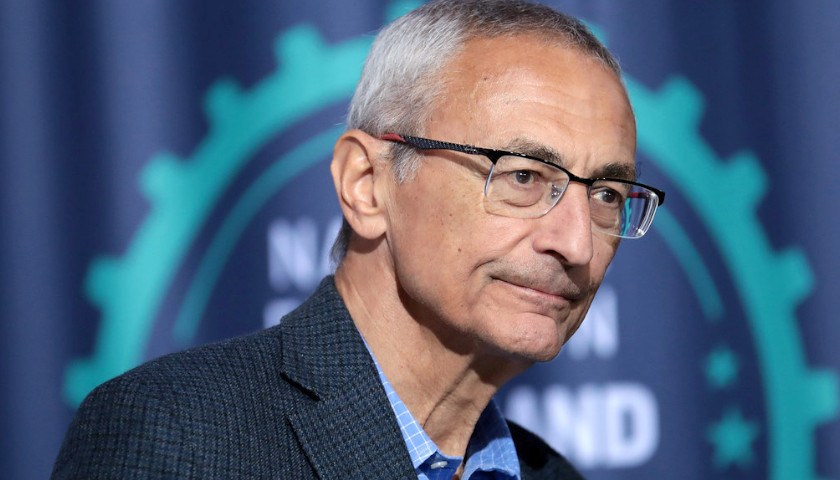 Eight years ago, the Obama administration bristled at the word “recusal.” White House Deputy Press Secretary Josh Earnest told reporters that the reason that top presidential adviser John Podesta would not be involved in the decision-making process involving the Keystone XL pipeline was that the State Department, not the White House, was already evaluating it “in an impartial way.” It wasn’t a “recusal,” Earnest insisted – there just was no need for Podesta to be involved.

And yet, as the Associated Press reported, the liberal Washington insider suggested that he shouldn’t work on the issue “because his views are well-known.” Fast forward to the current administration.

The White House has not instituted any special recusals, prohibitions, or other barriers for Podesta as he prepares to oversee $370 billion in new green energy spending, despite the fact that the president’s newest senior policy advisor publicly backed a number of those efforts before joining the administration.

So did a number of organizations affiliated with Hansjörg Wyss.

Wyss is the Swiss billionaire behind what the New York Times described last year as “a daisy chain of opaque organizations” funneling dark money almost exclusively to Democratic Party candidates in the United States and liberal environmental groups. As RealClearPolitics first reported, Wyss is not a U.S. citizen, a fact that had remained a public mystery despite the hundreds of billions of dollars he has spent to influence American politics. Wyss is also a longtime associate of Podesta.

For the past two decades, the career of Biden’s newest political appointee seems inextricably tied to the reclusive foreign billionaire.

When Democrats were in exile in 2003, it was Podesta who drew up the blueprints, then laid the foundation, for the Center for American Progress. Formerly President Bill Clinton’s chief of staff, Podesta built the think tank, not just to provide a counterweight to conservative analogues like the Heritage Foundation, but reportedly to rethink the very idea of liberalism itself.

From that beginning, Wyss was there to support the work.

In an authorized biography of her brother first obtained by RCP, Hedi Wyss wrote that her wealthy sibling was both “one of the founding members” and “one of the sponsors” of CAP, an organization she described as “largely endorsing the politics of the Democratic Party and that tries to propose and implement progressive ideas in American politics.” A spokesperson for the think tank confirmed to RCP in May that Wyss, who is listed on the organization’s website, was indeed a founding member.

One of the world’s most prolific philanthropists, Wyss pledged in a 2018 New York Times op-ed to donate $1 billion to global land and ocean conservation. In a 2011 interview, he described the work of his Wyss Foundation as serving as a rival source of influence to the U.S. government.

“Land owned by the federal government is managed for various interests, including hydraulic power, coal and gas, forestry,” Wyss told Swiss journalist Marie-Christine Bonzom. “So, it needs some kind of counterbalance so it doesn’t get ruined everywhere.”

His priorities aligns neatly with the current environmental efforts of the White House. The same day President Biden ordered a pause on new oil and gas leases on public lands, he also committed to protecting 30% of U.S. land and coastal seas by 2030. As National Geographic reported at the time, that movement to achieve the so-called 30 by 30 goal “was energized by Swiss philanthropist Hansjörg Wyss, who donated a billion dollars to launch the Wyss Campaign for Nature.”

Podesta has maintained ties with Wyss, and the two reportedly remain close. In 2013, shortly before joining the Obama administration, Podesta worked directly for the Wyss Foundation. According to publicly available tax documents, the former Clinton aide offered “consulting” services to that organization, then called the HJW Foundation. He was paid $87,000.

Conservatives argued at the time that Podesta had violated ethics rules by taking money from Wyss and then backing policies favored by the foreign billionaire, specifically making the Arctic National Wildlife Refuge off limits to oil and gas exploration. The Obama White House shrugged. A spokesperson for Podesta later told High Country News, which itself accepted funding from the Wyss Foundation, that there was no such impropriety.

“While Mr. Wyss and Mr. Podesta share a passion for conserving America’s most precious landscapes, his consulting work involved a separate philanthropy focused on social justice issues,” the spokesperson said. “He observed all applicable rules, and there was no conflict.”

But Hedi Wyss wrote that the relationship was more than piece-meal consulting work, that Podesta “is also one of the trustees of the Wyss foundations.” A spokeswoman for the philanthropist, however, disputed that characterization, telling RCP in a statement that “Mr. Podesta has never been a trustee or director of the Wyss Foundation.”

Wyss and those in his orbit are watching the White House closely and are encouraged by what they have seen so far. “We applaud the Administration’s landmark investments in clean energy,” the spokeswoman said, “which will create economic opportunity and help address the climate crisis.”

Those investments almost never happened. The $370 billion in new clean energy spending that Podesta will soon oversee was part of the Inflation Reduction Act, a pared down version of Biden’s doomed Build Back Better bill. When it passed the Senate weeks before he joined the administration, Podesta texted a reporter, “this was like watching Lazarus rise from the dead.”

That legislative resurrection did not happen in a vacuum. The dark money group Climate Power lobbied Congress for months to pass the massive spending bill, appearing on publicly available lobbying disclosures as “Climate Power, fiscally sponsored by Fund for a Better Future.”

The Fund for a Better Future serves as a pass-through for donors looking to support organizations that “protect the environment” and “uphold democratic values.” Between 2016 and 2020, according to the New York Times, the majority of that group’s funding, $45.2 million, came from one source: The Berger Action Fund, a Washington-based group founded by Wyss.

Podesta, for his part, served on the advisory board of Climate Power, regularly speaking and appearing on behalf of the organization, including an online panel with former Secretary of State John Kerry who now serves as Biden’s special envoy on climate. Climate Power did not return RCP’s request for comment.

Podesta is no stranger to controversy. Some argue that his multiple trips through the revolving door of government and influence are simply how Washington works. His brother and former business partner, Tony Podesta, already said as much.

“He agrees with those views, is an effective advocate, and they fund his research on issues they care about,” Tony Podesta told High Country News, addressing the relationship between his brother and Wyss. “That’s how the nonprofit sector works; that’s how think tanks work.” Each side has some billionaires in their corner, said Tony Podesta, who now lobbies on behalf of Chinese telecom giant Huawei. He added, “Did you expect the Koch brothers would fund John to stop drilling” in ANWR?

The White House did not return RCP’s request for comment.