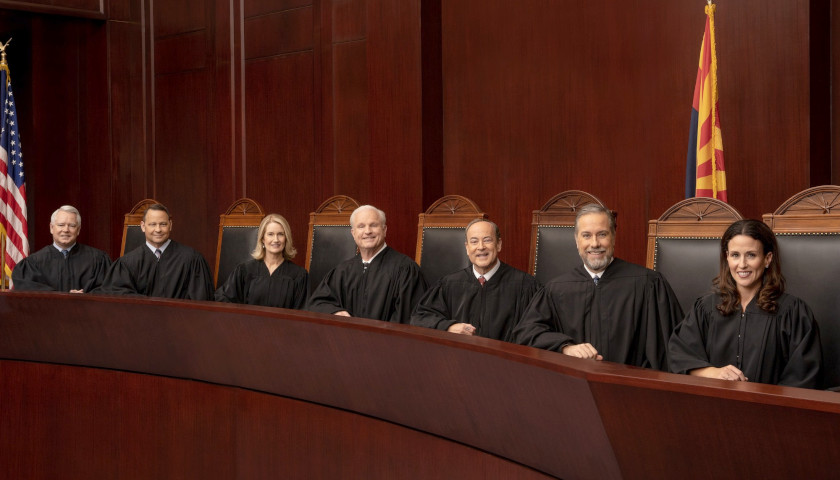 A voting initiative backed by progressive activists won’t be on the ballot this fall in Arizona after the Arizona Supreme Court ruled on Wednesday that backers failed to provide a valid mailing address to receive certified mail.

The court remanded it to the trial court to determine how many signatures would be invalidated, and after a last-minute dispute between the two courts over how to count the signatures, the Arizona Supreme Court stated on Friday that Arizonans for Free and Fair Elections lacked the required amount of qualifying signatures.

“We are very pleased that the Supreme Court affirmed the lower court ruling that Arizonans for Free and Fair Elections failed to gather enough lawful signatures to qualify for the ballot,” said Arizona Free Enterprise Club (AFEC) President and Executive Director Scot Mussi, whose organization filed the lawsuit against the initiative. “This radical initiative imported 60 different provisions from Washington, D.C. that would have increased fraud, harmed small business, and empowered special interests. They spent over $7 million trying to buy their way onto the ballot, and they failed.”

After the Arizona Supreme Court issued its first decision on Wednesday, remanding it to the trial court, that judge, Maricopa County Superior Court Judge Joseph Mikitish, announced on Thursday that based on his revised analysis, the initiative had 2,281 signatures over the required threshold of 239,926, so it qualified for the ballot.

But AFEC appealed, and the Arizona Supreme Court stated that they were “unable to verify the invalidity rate used by the trial court,” so they ordered Mikitish to show his calculations before 11 a.m. on Friday.

Since Maricopa County elections officials said they needed legal disputes finalized by 5 p.m. on Thursday to have enough time to prepare and print ballots, the Arizona Supreme Court said it would issue its decision Friday afternoon.

The decision has not been made public yet, but AFEC issued a statement about the reasoning. AFEC said the initiative’s “lawyers tried to get the court to adopt a rigged methodology to calculate the final number of valid signatures that would sneak their disqualified measure onto the ballot.

Their dubious formula cherry picked data that boosted their numbers, even including signatures that were disqualified by the counties in the random sample. None of their formula was rooted in statute or historical precedent and was a Hail-Mary attempt to resuscitate thousands of signatures that simply should not have counted.”

An Arizona law was passed in 2017 that requires initiative campaigns to “strictly comply” with all laws, changing the previous “substantial compliance” standard long-used by judges.

AFEC filed the lawsuit against the initiative in July, alleging the PAC behind it, Arizona Democracy Resource Center (ADRC Action), committed seven statutory violations, including collecting over half the signatures illegally, providing evidence that many of the initiative’s paid circulators provided false information, or failing to register with the secretary of state.

The trial court initially ruled that the initiative failed to qualify for the ballot. After hearing the appeal, Arizona Supreme Court Chief Justice Robert Brutinel issued the decision, which found that the address provided to receive certified mail failed to contain a unit or suite number, making it inadequate to receive key information. “The Court concludes that under A.R.S. § 19-118(B)(4), there must be sufficient information on the registration to enable an organizing committee to receive certified mail,” he stated.

The state supreme court also ruled on other statutory violations made by the committee, deferring to a couple of stipulations the opposing parties made regarding how many violations were made, including “the number of circulators who included incorrect telephone numbers when the registration applications were submitted” and “the number of circulators who submitted incorrect addresses.”

The initiative rolls back recent election integrity laws passed by the Arizona Legislature, makes it easier for people to vote without proving citizenship, and removes standard election fraud safeguards like registering to vote in advance of elections. The initiative is funded and backed by a large coalition of local and national progressive groups, including George Soros’ Open Society Foundations and Way to Win.

Way to Win is a national donor network that claims its $110 million in funding to key states, including Arizona and Georgia, was the reason for the Democrats’ blue wave in 2020. Their About Us page states, “The money moved in 2019 laid the groundwork for historic wins in 2020 where Arizona and Georgia flipped blue thanks to long-term investment and organizing. … Through our work, we successfully flipped Georgia and Arizona, and laid the groundwork to do the same in states like North Carolina and Texas.”

The Arizona Supreme Court also ruled this week that two progressive initiatives qualified for the ballot; the “Voters Right to Know Act”, which adds new disclosure requirements regarding campaign contributions, and the “Protection from Predatory Debt Collection Act”, backed by a California-based employee union, which makes broad changes to debt collecting laws. They are two of nine other measures on the ballot in Arizona for the general election on November 8.