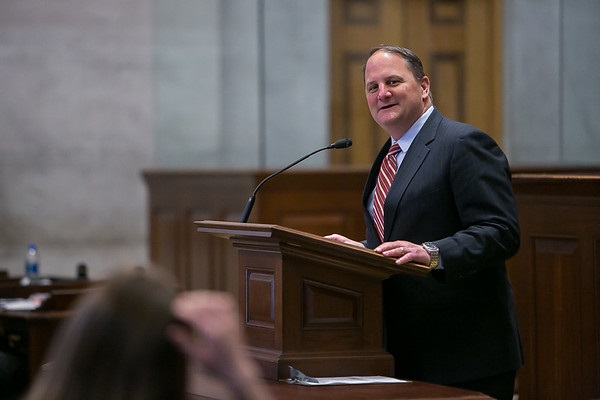 Golden said the last 36 hours had been a “wake up call and a rally cry” for Republicans who care about America.

“The Democrats’ legislation passed on Sunday promises to increase taxes, increase inflation, and adds over 87,000 IRS agents to monitor U.S. taxpayers. Coupled with last night’s unprecedented raid on President Trump’s home which marks another sad and terrible milestone in the continuing politicization of the rule of law,” he said.

“Time is running out. We have 91 days until Election Day and we must vote, volunteer, contribute, and work to save the America we love,” Golden said.

In contrast, the Tennessee Democratic Party Chairman Hendrell Remus tweeted on Monday, “The FBI raided the home of a former President because he’s a lifelong criminal. His corruption is finally catching up with him.”

The FBI raided the home of a former President because he’s a lifelong criminal. His corruption is finally catching up with him.

In a statement released on Monday,  Trump announced that a group of FBI agents had raided his home.

“These are dark times for our Nation, as my beautiful home, Mar-A-Lago in Palm Beach, Florida, is currently under siege, raided, and occupied by a large group of FBI agents. Nothing like this has ever happened to a President of the United States before. After working and cooperating with the relevant Government agencies, this unannounced raid on my home was not necessary or appropriate,” said Trump.

Trump said this raid was a “weaponization of the justice system.”

“It is prosecutorial misconduct, the weaponization of the Justice System, and an attack by Radical Left Democrats who desperately don’t want me to run for President in 2024, especially based on recent polls, and who will likewise do anything to stop Republicans and Conservatives in the upcoming Midterm Elections. Such an assault could only take place in broken, Third-World Countries,” he said.

“Sadly, America has now become one of those Countries, corrupt at a level not seen before. They even broke into my safe! What is the difference between this and Watergate, where operatives broke into the Democrat National Committee? Here, in reverse, Democrats broke into the home of the 45th President of the United States,” added the former president.