Commentary: I Went to Church on Sunday 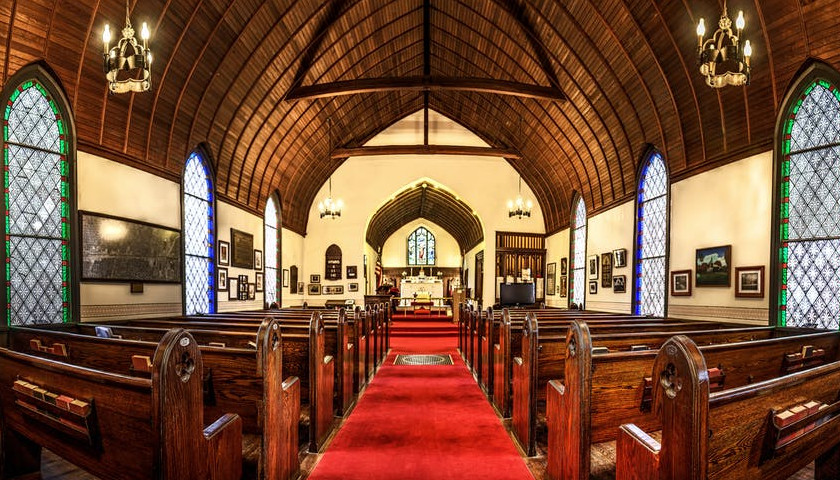 I attended church last Sunday. It was an Episcopal church in a large California coastal city—and it blew me away, even though (or because) I am a confirmed member of the Anglican Communion, and a confessing Christian.

Now, I have not been in an American Episcopal church for about a decade, due in part to COVID-19 and the fact that I was living abroad, in Tory England, for a very long spell.

Believe me, everything has changed and moved radically in the wrong, hellish direction.

Simply put, this is no longer Christian worship. Succumbing to woke culture, faddism, and a degree of heresy, faithful belief has nearly ended.

Up front, the order of service itself says so. Church is instead for “whoever you are, and wherever you find yourself on whatever faith journey.”

Then in bold print, it has a verbose paragraph about the most important thing, “A Gentle Reminder about Mask Etiquette.” Not only must masks be worn but the warning goes on and on about how, why, and disallowing “compromises of effectiveness.” It will be enforced, but by who? There is no longer a mandate in this particular city, but there is in church!

Maybe it is the new monkey thing?

The Rector-Priestess is herself from Great Britain, and an Ivy League divinity school grad. Far beyond liberal, she is what I would refer to as an utterly agnostic liberationist (UAL), to coin a new acronym. Using her iPhone for the sermon and ritual, she asked congregants to sign into the QR code to avoid any contact. Her longish harang of a sermon was a mishmash of platitudes and outright doctrinaire socialism. Attacking wealth and all things American—the worst of all countries—according to her most revered and oft quoted source, the New York Times. The scripture readings were from the prophet, Hosea. She says the Bible in her view allows wealth but it should be shared.

Attacking capitalism by name, she then carried on about the evils of shareholding and made a plea for a so-called, “stakeholder society” and encouraging multiculturalism. Oddly, her closing remarks dismissed the sad failure of the church’s current capital campaign. Recession and inflation, she lamented, have had a negative effect on church giving. Unfortunately, they won’t be able to renew their huge pipe organ or build a new hall on their campus. Coincidentally, directly across the street from the rich, massive church, you can find a string of dirty and torn tents housing the homeless—all within their clear view.

The huge cathedral was about a third or less full. Most were older people, predominantly women. Only one black person, two children, and three people with their dogs, all on leashes. Just one older distinguished gentleman, an usher, wore a suit; all the rest were in sandals or flip flops, tank tops, and shorts. I did sense a significant number, perhaps even a plurality, of the attendees to be gay men, with the telltale single earring and many public displays of affection. All in a church.

The service started with Bach, an organ voluntary, auf Deutsch, Schmücke dich, o liebe seele, dated 1685. But as the cross proceeded, I noticed it was draped in the gay pride flag.

The ministers of the liturgy were listed with their preferred pronouns. So trendy!

Then the presider said the customary “Blessed, be to God . . . Amen.”

The readings were from both the Old and New Testaments, as well as the Gospels. But they didn’t use the old King James version or even the Revised Standard version of the good book. These are woke wordings and novel to say the least. As I turn over the program to the last page, we are informed that they now use something called the Saint Helga Order, using “only inclusive and expansive language.” Four long paragraphs go on at length describing this new advancement and editing out of any male designations. God is referred to as “she.”

What I find most incongruous was the attempt to meld the traditional and long-appreciated Anglican liturgy and hymns, some from the (wicked) 7th and 15th centuries, with this smorgasbord of hip, woke, feminist, and queer neologisms. It doesn’t work, seems forced, and even sacrilegious.

Upon further research, I discovered the Episcopalians, and for the most part all the other U.S. Protestant denominations, have by now more or less removed Christ from their doctrines and instead have gone very far Left politically and culturally. They are certainly not the Republican Party at prayer any longer. Well, on second thought, maybe they are?

The core issue is theological; the intellectual integrity of faith in the modern world is a matter of faithfulness to the Lordship of Jesus Christ, whom we worship and follow.

The American Episcopal Church no longer believes the historic orthodox Christian faith common to all believers. It has jettisoned all of that for the au currant flavor of the month and in the process has lost touch and denied its own history and doctrines.

Nationally, the Episcopal Church’s membership peaked at 3.4 million members in 1959. “It has been declining since the 1960s,” according to demographers. As of 2019, it had about 1.8 million congregants, the Episcopal News Service reported in 2020. “Membership is now down 17.4 % over the last 10 years.” Why would that be, and what is the connection to what I have described? I have to wonder.

The Episcopalians have retained the formal “Confession of Sins,” although seemingly nothing is considered particularly sinful any longer. The word itself was never uttered in the entire service, except for the line on the greedy, arrogance of sinful capitalism. But oddly again in contradistinction, it was still evident in the Book of Common Prayer used, dated 1928. It read,

Most merciful God,
We confess that we have sinned against you in thought, word, and deed, by what we have done, and by what we have left undone. We have not loved you with our whole heart; we have not loved our neighbors as ourselves. We are truly sorry and we humbly repent. For the sake of your Son Jesus Christ, have mercy on us and forgive us; that we may delight in your will, and walk in your ways, to the glory of your Name. Amen.

Surely, someone is going to have to change or remove this.

Fortunately, the last words in the service bulletin read the final and ultimate reality. Please, we are admonished, “remain masked while singing and departing.”

In a book I co-wrote with the philosopher Nicholas Capaldi some years back, we argued (like the American founders had) that our county’s spiritual capital was essential to our way of life. Against theocracy and any established church, we found favor with a pluralistic religious culture rooted in a moral sensibility, originating in Christianity.

That book told a story, a story about America’s spiritual capital. Spiritual capital is the fount of beliefs, examples, and commitments that are transmitted from generation to generation through a religious tradition, attaching people to the transcendent source of fulfillment and happiness.

America has created the greatest civilization the world has ever known, and it has done this because of its spiritual capital, the values and beliefs by which individual Americans have interpreted and transformed the world. The Judeo-Christian heritage historically has served as the spiritual capital of America.

Our larger thesis was that America, by virtue of its specific spiritual capital and heritage, is not only the beneficiary of its advantages but also the leading exemplar of the spiritual quest of modernity. It is because it is engaged in a spiritual quest that it can exercise world leadership as opposed to domination and oppression.

Economic development, growth, and entrepreneurship depend on spiritual capital. There is a symbiotic relationship between America’s spiritual capital and our political institutions and freedoms. The argument here is that the substantive spiritual vision supports the political and economic procedural norms of a free society.

Like any form of capital, spiritual capital may lie dormant or be wasted, it may be used productively, it may be augmented, and it may be diminished or eroded. Our heritage is under assault from a variety of sources and the consequences of scientific, technological, economic, and political institutions detached from their spiritual roots.

But what about religious institutions and the very Church itself? Reread my account of Sunday worship if you need a hint.

The result has witnessed a natural progression from governmental bureaucratic centralization to secularism to reductive materialism and ultimately to an idolatrous social-collectivist conception of human welfare. American achievements will not be sustained without that spiritual heritage, and for all of the above reasons, the heritage needs to be reaffirmed, the doctrines need an apologetic.

The future of modernity and America depends on the extent to which there is a reaffirmation of America’s spiritual capital.

What are we to do if we can’t even go to church for fellowship and communion any longer? How do we tend to our souls? What if that spiritual capital is actually being drained away in places like the American Episcopal church? What if we are going forward on only the fumes of our past?

Theodore Roosevelt Malloch, scholar-diplomat-strategist, is CEO of the thought leadership firm The Roosevelt Group. He is the author of 18 books, including The Plot to Destroy Trump and, with Felipe J. Cuello, Trump’s World: GEO DEUS. He appears regularly in the media, as a keynote speaker, and on television around the world.