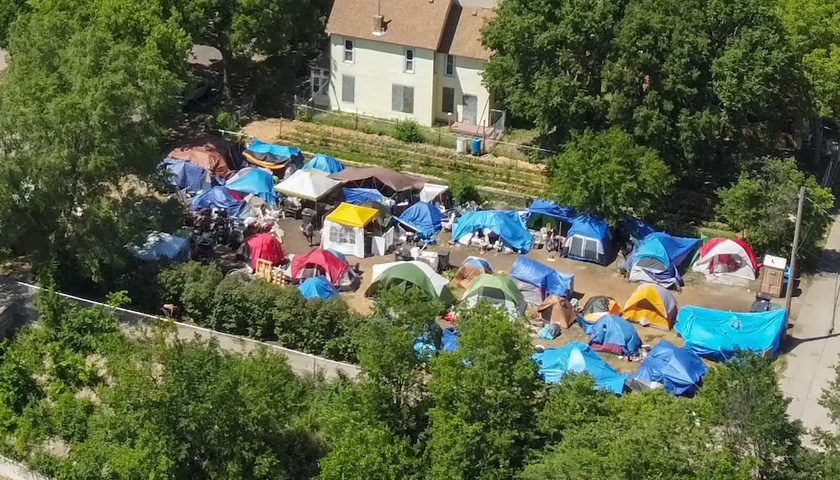 Charred rubble and shells of burned homes are what’s left of three properties on 14th Avenue South in the Phillips neighborhood of Minneapolis.

Neighbors suspect the July 20 fires were connected to a nearby homeless encampment, but that is unconfirmed and the case remains under investigation.

Alpha News is now sharing the sickening scene one homeowner discovered just days before the fire.

She is fearful for her safety after what happened at her home. It’s why we are not showing the woman’s face or using her name.

After being out of town, she came home to a horrible scene two weekends ago. Every room in the house where she’s lived for 20 years was ransacked. 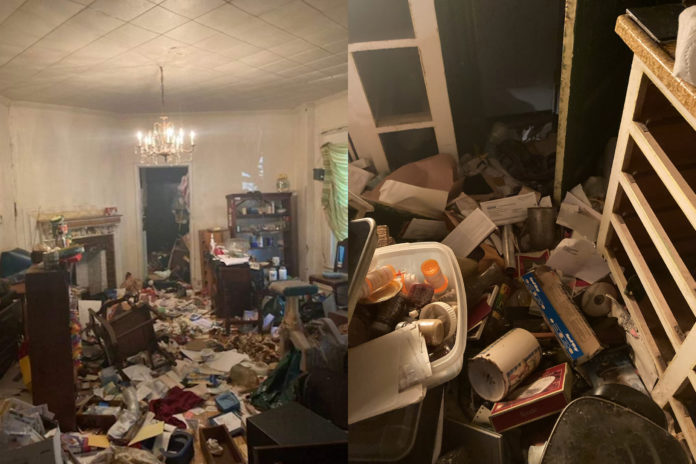 A woman who lives near the homeless encampment said her home was ransacked after speaking out about the issue. (Photos provided to Alpha News)

“Everything destroyed and torn apart. Doors kicked in. Everything I owned [was] trashed. Stolen. Bags of stuff stolen and taken out of the house,” she said.

She believes it was retaliation for speaking out about homeless encampments in the neighborhood.

The woman was candid about what’s gone on.

“They would not let American Indian young people as young as 15 get strung out on opioids and not help them. Also, for the mayor to just go along with business as usual and not prioritize this community or our block or the kids locked into that encampment is inexcusable. For the governor to not react? Where’s Peggy Flanagan, our lieutenant governor? These are her kids. These are native kids in these camps being victimized,” she continued.

Just days after her home was ransacked is when the three other homes went up in flames. Two of the homes were vacant. 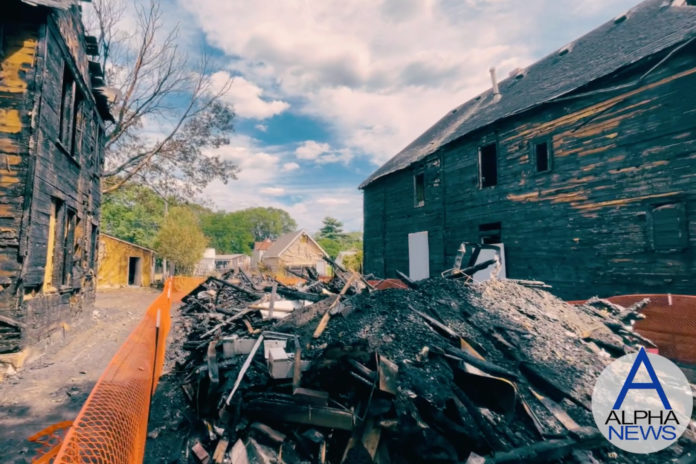 The home that burned down in the Phillips neighborhood. The two homes next door were destroyed by fire. (Alpha News)

On that same day, the woman discovered someone had been back to her place, this time to light candles and spread lamp oil on the belongings left behind.

She believes the intention was to burn her house down.

“It’s just heartbreaking to see the violence that neighbors have had to endure in this neighborhood. It’s not right,” she said.

Photos have captured all they’ve endured. They show people doing drugs and showering on their properties, hanging clothes on their shrubs, stashing stolen cars in vacant garages, tossing dirty needles in their yards, and stealing mail.

“There are spotters on the city-regulated scooters that watch when people leave and then it’s like free market because no one is home,” the woman said.

Alpha News asked another woman to describe what the last couple of years have been like for her in the Phillips neighborhood.

“It’s been a living hell,” she said bluntly.

Donna didn’t want us to use her last name. She also fears for her safety.

“It’s true the campers are not violent, but the drug dealers, the human traffickers, come in and they pretty much terrorize the encampment and the people living around the encampment. If you complain, you get the activists who complain about how heartless you are. Then you also get the violent criminal element that’s threatening you. Those threats have become more and more real,” Donna told Alpha News.

Dispatchers have taken 900 9-1-1 calls in the last two months from the neighborhood. 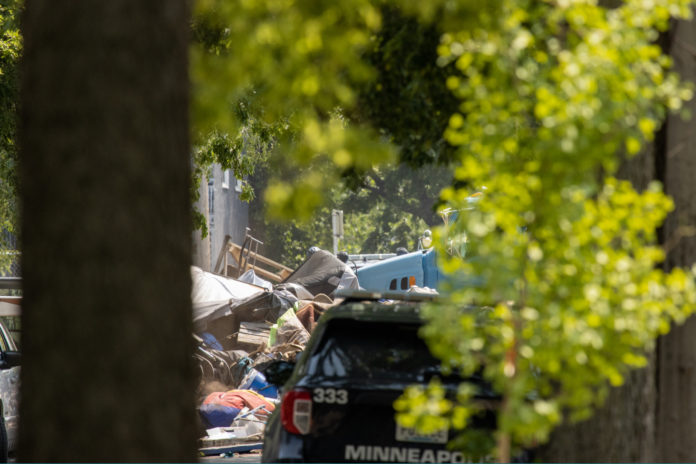 Donna told us, in a way, they saw it coming, as the city allowed the encampment to grow to at least 100 tents before finally clearing the camp just hours after the fires.

Neighbors said tensions have been rising for months. Posters found around the city this spring said, “You sweep, we strike.”

The posters threatened police and public works employees alongside a picture of someone holding a homemade incendiary device. 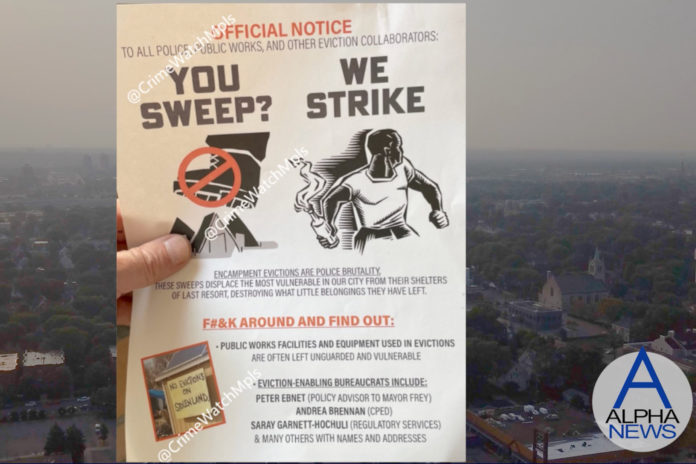 A copy of the poster obtained by Crime Watch Minneapolis.

The same words were spray-painted on the main Seattle Parks and Recreation building this spring after encampment clearings in that city.

“These activists, I don’t think they’re harmless. I’m telling you that,” Donna said.

“We’ve just been run over by this crime and we feel abandoned,” she added.

Donna had a quick response for anyone who wonders if this is what they voted for.

“I’m a liberal. I’ve been liberal all my life. But I’m not woke. You can be woke and full of daydreams, believe me. When you’re at that level of government, I think you should not be so concerned with, ‘I’m a real liberal or I’m a real conservative,’” she said.

Residents pointed to their council member, Jason Chavez, as an example. The Democratic Socialist once worked as embattled Rep. John Thompson’s legislative assistant. Chavez did not reply to a request for comment about his constituents’ concerns.

Within hours of the city clearing the encampment, a new one went up two blocks away. Alpha News counted more than 20 tents at the new location.

Asked about the new encampment, the city told Alpha News in a statement that many people refused services from its homeless response team and city officials have reached out to the property owners to determine next steps.

As for the woman who believes her home was targeted, she knows of at least seven families on the block who are moving.

“I think everyone is holding guard right now but trying to figure out how to say the hell with Minneapolis, quite frankly,” she added.

Alpha News also asked MPD if federal authorities like the ATF would be involved to investigate. The police department did not respond.

Alpha News also contacted Gov. Tim Walz for comment on the ongoing situation and did not receive a response.

Liz Collin has been a truth-teller for 20 years as a multi-Emmy-Award-winning reporter and anchor. Liz is a Worthington, Minnesota native who lives in the suburbs with her husband, son and loyal lab.
Photo “Minneapolis Homeless Encampment” by Alpha News.