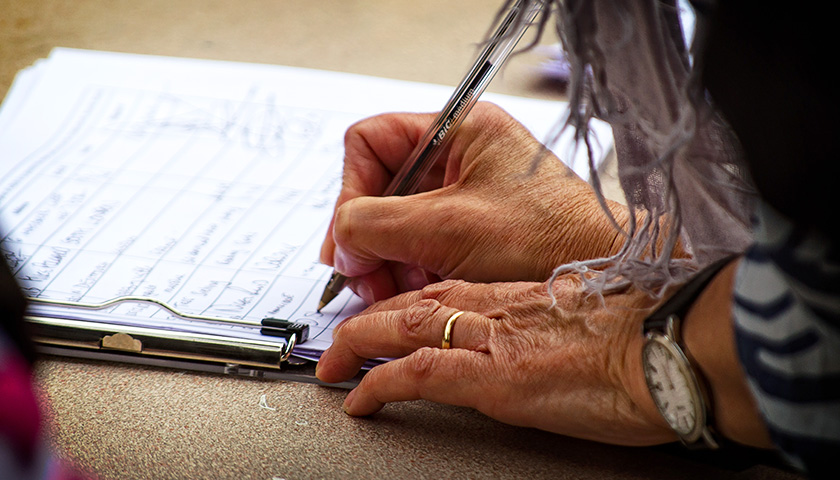 A watchdog group sued Arizona’s secretary of state along with a left-wing group over that group’s effort to have a “radical” initiative placed on November’s ballot that would weaken election integrity in the state.

The lawsuit, filed by the Arizona Free Enterprise Club, says:

This action challenges the legal sufficiency of the registrations of certain circulators of the statewide initiative petition bearing the serial number I-16-2022 (the “Initiative Petition”). The Initiative Petition seeks to qualify for placement on the statewide ballot in the November 8, 2022 general election, a sprawling measure that upends Arizona’s election administration and voter registration laws, sharply reduces candidate contribution limits while channeling more taxpayer subsidies to so-called “Clean Elections” candidates, curtails safeguards governing the initiative and referendum process, and imposes new taxes (the “Act”).

The defendants are Secretary of State Katie Hobbs (D) and a group called Arizonans for Free and Fair Elections.

The suit alleges that some of the people circulating the initiative petition were required to register with Hobbs’s office, but did not.

It also says they did not “provide a signed and notarized affidavit averring to the accuracy of the specific information included in their registration,” and did not “provide on their registration submissions to the Secretary of State a full and complete permanent and (if applicable) temporary residential address — to include the relevant apartment or unit number, if the circulator resided in a multiunit complex,” which the plaintiff claims is a violation of law.

It further alleges that members circulating the petition did not provide legally-required contact information, along with other paperwork errors and omissions.

“After analyzing over 45,000 petition sheets and 420,000 signatures, it’s clear that well over half of the signatures on this election initiative were collected in violation of state law,” the Arizona Free Enterprise Club President Scot Mussi reportedly said. “That should be more than enough to invalidate this initiative.”

Pete D’Abrosca is a reporter at The Arizona Sun Times and The Star News Network. Email tips to [email protected].
Photo “Petition Signature” by Garry Knight. CC BY 2.0.