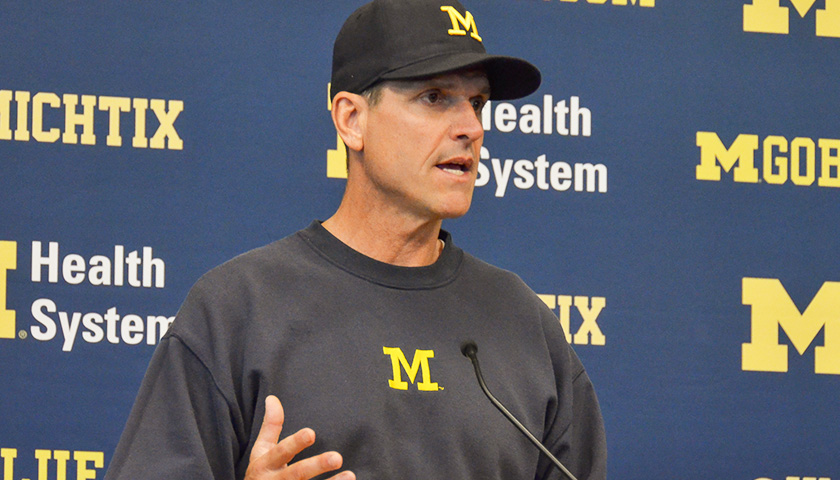 University of Michigan-Ann Arbor coach Jim Harbaugh made several pro-life statements as a guest speaker at a pro-life event on July 17.

Harbaugh told those in attendance:

Harbaugh then quoted the Book of Jeremiah, stating, “Before I formed you in the womb, I knew you. Before you were born, I set you apart. I appointed you as a prophet to the nations.”

The Michigan coach immediately received backlash from people on Twitter who claimed the coach was against women’s rights and supported forcing people to give birth.

However, some Michigan students felt Harbaugh’s statements were refreshing.

Hanna Merrithew is a junior studying architecture at Michigan. She told Campus Reform that the ability to exercise one’s freedom of speech is paramount.

“I do not find it inappropriate for Harbaugh to make political statements,” she said. “Many people with a large platform use it to support a variety of movements, and I think it is a great way to reach a large audience.”

Merrithew further explained, “There will always be a backlash when you take a strong political stance, but I think it is also important that people have the ability to exercise their free speech as they choose.”

Russell Clarke told Campus Reform that he “respected” Coach Harbaugh for taking a stance on the issue.

“Sometimes I would worry that being vocal about my beliefs would negatively impact my schooling, so seeing a faculty member of the university, especially such a respected one, being incredibly vocal about his beliefs makes me feel more confident that I can share my beliefs with others,” Clarke added.

“I think it is appropriate for Jim Harbaugh to make comments on political matters. First, he is staying true to his conscience and speaking out against what he believes is wrong. This is the fundamental basis of free speech and the free exchange of thoughts and ideas.”

The University of Michigan-Ann Arbor spokesperson Rick Fitzgerald provided Campus Reform with a statement on behalf of the school:

“Jim Harbaugh attended an event and shared his personal views as any citizen has the constitutional right to do. He was sharing his personal beliefs and not speaking on behalf of the university,” the statement reads.

Fitzgerald also referred Campus Reform to an earlier statement demonstrating support for abortion after the Supreme Court ruling in June.

The statement, released in partnership with Michigan Medicine, stated the school is “committed to providing high quality, safe reproductive care for patients, across all their reproductive health needs.”

The statement included abortions as a reproductive health need.

Currently, Michigan is awaiting the results of a lawsuit challenging a 1931 abortion ban. The ban was temporarily suspended after Planned Parenthood of Michigan sued to claim the law was unconstitutional.