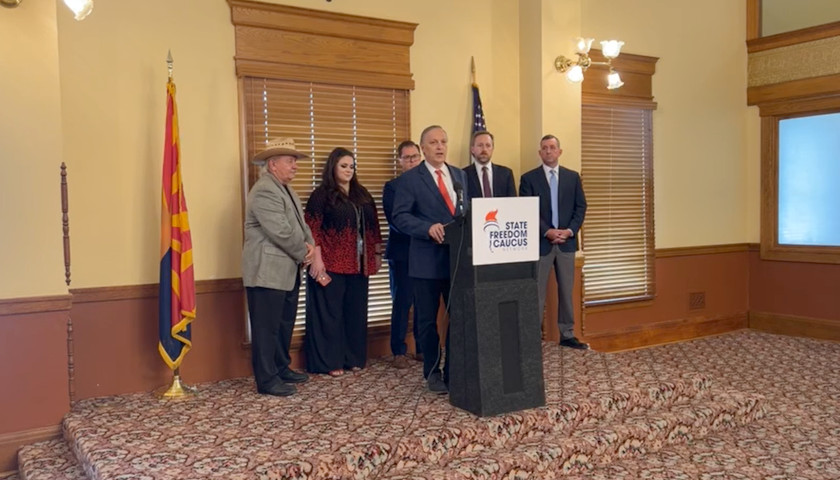 Following in the footsteps of the federal Congressional House Freedom Caucus, legislators in the Arizona House have established an Arizona Freedom Caucus. A group of conservative lawmakers announced during a press conference last week that nearly a third of the Arizona House’s 31 Republicans have already joined it.

The founding chairman is State Representative Jake Hoffman (R-Queen Creek), who said he was humbled “to lead them in battle against the Left and the establishment GOP that refuses to answer to the will of the people and instead chooses to answer to special interests and lobbyists’ groups that reside down here – they fill the halls.”

Andy Roth, president of the State Freedom Caucus Network, said the caucus is part of the State Freedom Caucus Network, which was started in December 2021. So far, Georgia, Mississippi, South Carolina, Nevada, Illinois, and South Dakota have started their own caucuses. Washington is expected to form one next, with half the states joining by the end of 2023.

Roth said its mission is “to take the success of the House Freedom Caucus and leverage it down to the 50 states.” He credited Rep. Andy Biggs (R-AZ-05), who has chaired the federal caucus, with making it happen. “All of the big fights in this country are happening at the state level.”

Biggs explained why the state-level caucus is necessary. “Currently, our federal system of government is upside down.” He went on, “Washington D.C. rarely solves problems, it just exacerbates problems. If this country’s going to return to a limited government, balance the budget, America-first type of idea, it’s going to happen at the state level.”

Biggs reflected on his previous experience serving as a state legislator, saying, “When I served in Arizona for a few years, I can tell you, we spent the vast majority of our time trying to comply with federal mandates, federal regulations, federal spending demands.” He added, “The next step is for state legislators to tell the federal government ‘no.’”

Hoffman praised the founding of the original federal House Freedom Caucus, which launched in 2015. “The gridlock we see in D.C. – it was worse, until Mark Meadows and Jim Jordan had the vision and foresight to found the House Freedom Caucus. … Our entire nation owes them a debt of gratitude.” He thanked others who have led the caucus like Biggs. He said people look at the Founding Fathers as “bigger, or stronger, or more qualified,” but “that’s not true.” The representative further commented that he believes Biggs, Jordan and Meadows are “the giants of this era” who will be written about in history books.

Hoffman said in 2023, the caucus will expand to the Senate, which should bring its membership to 40 percent of all Arizona Republican legislators. Some legislators who join will keep their membership private for reasons such as being in swing districts.

He explained the need for the caucus, saying, “For over 100 years, generations of Americans have witnessed the state creep of government. … We’ve watched freedom grow smaller and smaller. As government grows, liberty decreases,” added Hoffman, quoting a popular paraphrase from the writings of Thomas Jefferson. He said he believes Americans are fed up with politicians who say words they don’t mean. “The states are the answer to this problem.”

Wade Miller, from the Center for Renewing America, said that in his years of working with legislators, he’s observed one consistent theme: “Conservative lawmakers are massively outnumbered by the radical left, media, Marxist professors and establishment Republicans that work to create memes suggesting that what we see as solutions for families across the country is just fringe radicalism itself; all the while they push further and further to the Left.”

Miller said “actual racism” is “being pushed in our schools.” He explained, “Schools are driving wedges between students in ways that they themselves don’t understand and don’t see, where they’re being forced to do it, and they know it’s not right and their parents know it’s not right.”

One of the reporters present criticized the group for lack of transparency by allowing legislators not to publicly identify as members. Hoffman responded and said it’s necessary considering the “swamp” that exists at the legislature, where lobbyists hanging out in hallways prepare everything for legislators in advance to make it easy to whip their vote on a bill.

Last year, Republicans held one-vote majorities in both Arizona legislative chambers, and one Republican in each chamber frequently voted with the Democrats, blocking Republican efforts. One was the Speaker of the House Rusty Bowers (R-Mesa), who is currently facing a tough race. The other legislator, State Senator Paul Boyer (R-Glendale), decided not to run for re-election after encountering dismal polling. The federal House Freedom Caucus is credited in part with forcing former Speaker John Boehner, who often clashed with conservatives, into retirement. Previously, some Arizona legislators were part of a loosely organized Arizona Liberty Caucus.