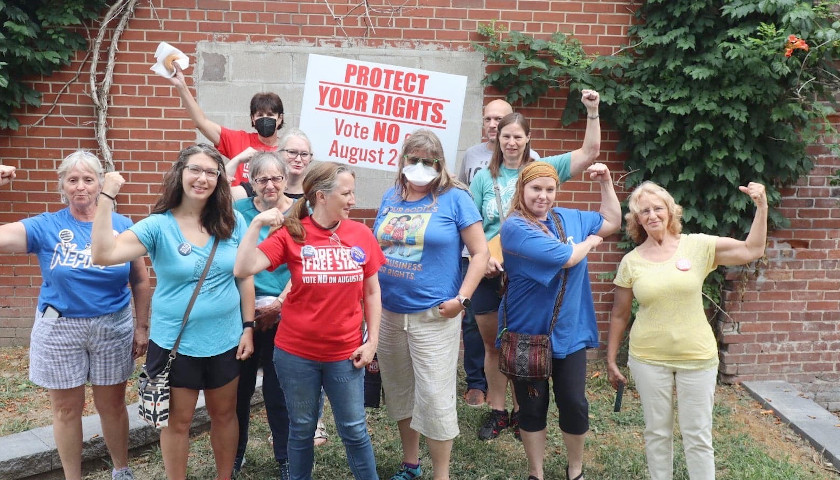 Minutes after the Supreme Court overturned Roe v. Wade and the 49-year-old constitutional right to abortion, President Biden addressed the nation. “Voters need to make their voices heard. This fall, Roe is on the ballot.”

Make that late summer. On Aug. 2, Kansas will become the first state to vote on reproductive rights since the landscape-altering U.S. Supreme Court decision Dobbs v. Jackson Women’s Health Organization, which took away the federal guarantee of abortion and gave the issue back to the states.

Many states had “trigger” laws already in place to ban abortion, and at least a few states – like Kansas neighbor Oklahoma – had already outlawed abortion with few exceptions.

In Kansas, abortion has been legal, but with limits. If approved, the August amendment would overturn a 2019 state Supreme Court ruling that determined the Kansas Bill of Rights “protects a woman’s right to decide whether to continue a pregnancy.”

“The Kansas Constitution is the only thing that protects Kansans’ right to access abortion care,” Ashley All, a spokeswoman for Kansans for Constitutional Freedom, told RealClearPolitics. “The amendment on the ballot will pave the way for a total ban on abortion with no exceptions.”

But advocates of the Aug. 2 amendment, which they’ve labeled “Value Them Both,” argue Kansas has become a “destination” state for abortions given restrictive laws in nearby Missouri, Arkansas, Texas, and Oklahoma.

”Abortions are surging in Kansas,” warns the oversized postcards filling Kansans’ mailboxes. Both sides have hefty war chests, and a TV ad war rages. The Value Them Both campaign contends Kansas “allows extreme procedures like painful live dismemberment abortions.” Their website features a picture of a full-term baby and warns that “all restrictions on abortion will be eliminated and abortions until birth on healthy babies will be permitted” unless the amendment passes.

Vote No advocates contend that information is simply wrong. Abortion in Kansas is already heavily regulated. The procedure is banned after 22 weeks – the viability standard – and there have been zero post-viability or “late-term” abortions in Kansas since 2018, according to All’s group. The state requires a mandatory waiting period and parental consent for minors.

The Catholic Church has been deeply involved in the Value Them Both campaign, leading prayers during Mass and handing out literature and yard signs. Of the $1.2 million raised for the “Yes” campaign, according to the latest filing in February, $500,000 came from the Archdiocese in Kansas City, Kansas, and another $250,000 from the Catholic Diocese of Wichita. RCP found these figures on filings with the ethics division of the Kansas secretary of state’s office.

“We pray tonight not just for victory on August 2 at the ballot box … but what we really pray for is a … culture and society where abortion will become unthinkable,” Archbishop Joseph Fred Naumann of Kansas City, Kansas, said at a recent rally, reported in The Kansas City Star. Naumann, a longtime anti-abortion activist who has supported efforts to deny communion to Biden because of the president’s support for abortion rights, declined to speak to RCP.

The Catholic Church has come under fire for hovering near the line between church and state. “Keep your rosaries off our ovaries” was a favorite chant of Vote No advocates at a recent rally in Lawrence, according to The Star.

Yet lead consultant Debra Neisen of Pro-Life Ministries, which is part of the Catholic Church, argued to RCP that there is a long history in the United States of religious institutions being at the forefront of social movements. Immigration reform, the civil rights movement, and temperance, for instance, have attracted religious support. “The ‘church and state’ argument is an attempt to silence people of faith,” Neisen said.

By contrast, Kansans for Constitutional Freedom, Inc. reported contributions of about $460,000 for the same period, with the bulk coming from the ACLU, Planned Parenthood, and the Center for Reproductive Freedom. Donations have surged in recent weeks, Vote No sources say, allowing them to compete with mailings and TV ads.

While Kansas is usually reliably red, it also has an independent streak. Voters found former GOP Gov. Sam Brownback, and his disastrous tax cut “experiment” that triggered massive cuts in services, so distasteful that Brownback seemed eager to get out of Dodge and resign to become the Trump administration’s ambassador for religious freedom. Democrat Gov. Laura Kelly easily won the 2018 general election to replace him.

The Vote No team is hoping high turnout in large cities and from independents can beat back the rural vote. They’re buoyed by actions such as those of Village Presbyterian, a congregation of 2,500 less than two miles from the blue border of nearby Kansas City, Missouri.

“Jesus Trusted Women. We Do Too,” said a sign that went up this past week in front of Village Presbyterian. At the Johnson County Democratic Party headquarters, telephone recordings have said for days that the office was out of “Vote No” signs. A shipment of 5,000 yard signs came in last Thursday; about half were gone by Saturday, according to a volunteer manning the phones.

Supporters of abortion rights are worried, and annoyed, that the GOP-controlled legislature put this amendment on the August primary ballot, when usually only the most fervent and partisan of voters take part. Often twice as many Kansans vote in the November general election, as compared to a summer primary. Kansas has a closed primary system, meaning usually only declared Republicans or Democrats vote in the primary.

But anyone can vote on the upcoming constitutional amendment. “Unaffiliated and independent voters usually do not get to vote,” said All. “This year they can, and should.”

The flyover state demands attention, Neisen explained to RCP. Kansans “are being asked to help write the first chapter of America post-Roe. This is a defining moment in Kansas and in our nation.”

Adeline Von Drehle is a rising senior at the University of Missouri studying American history. She will spend the coming year as an Oxford fellow at Corpus Christi College.
Photo “People for Abortion Access in Kansas” by Kansans for Constitutional Freedom.