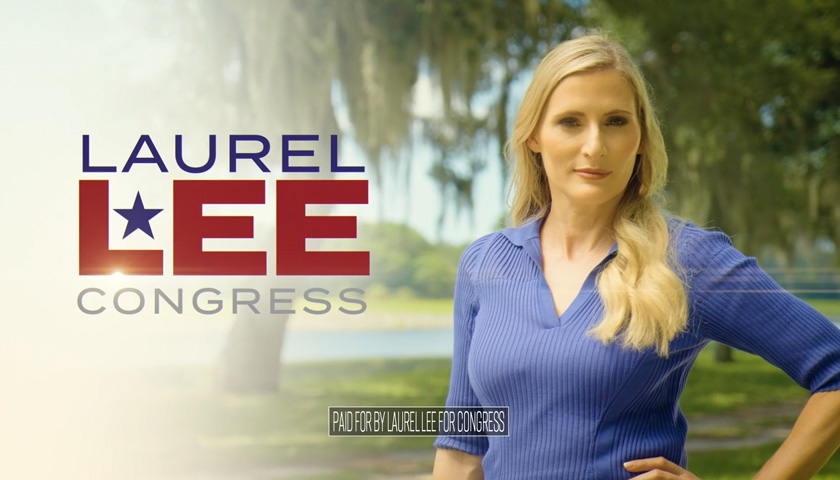 Former Florida Secretary of State Laurel Lee released her first political ad of the campaign season. Lee is running for Florida’s 15th Congressional District, which encompasses northeast Tampa communities stretching up to Zephyrhills and across to Lakeland.

In the ad, Lee touts her track record for implementing election integrity laws that were passed by the Florida Legislature and signed by Florida Gov. Ron DeSantis. She also described herself as a “conservative that will battle Biden’s leftist agenda,” will continue to support building a wall on the southern border started by former President Donald J. Trump (R), and defend gun rights.

In the video, she features many shots of DeSantis; however, he has not waded into the Republican primary and made an official endorsement. The other Republican primary candidates are notable Florida Republican officials State Representative Jackie Toledo (R-Tampa) and State Senator Kelli Stargel (R-Lakeland).

Lee has received the endorsement of Florida Attorney General Ashley Moody (R), whose career as a federal prosecutor and judge is similar to Lee’s.

“Like me, Laurel has been a federal prosecutor and a judge,” Moody said. “She’s worked side-by-side with law enforcement to protect Floridians and ensure that the laws of our state are respected. I am proud to endorse Laurel Lee, and I know she will make an outstanding conservative fighter for Florida in Congress.”

Toledo champions herself as the candidate that will “keep ‘woke’ indoctrination out of the classroom, eliminate any and all Big-Government mandates, and keep our communities safe by securing our border.”

Stargel, the third conservative female running for the Republican primary, derided the “socialist Demcorats” for infringing on religious freedom, protecting women’s sports from the infiltration of transgender competitors, and is a fiscal conservative.

Stargel touts the endorsement of Florida Family Action, a pro-life lobbying group based in Florida, and Senate President Wilton Simpson (R-Trilby) who is running for agriculture commissioner in his own right.

Stargel began getting national attention because her daughter, Hannah Stargel, encouraged her TikTok followers to not support her mother’s congressional bid, calling her “the worst mom ever.” Stargel’s daughter is openly bisexual and has expressed laments about being raised in a Christian, conservative environment.

The primary between the three conservative females will occur on August 23.

Grant Holcomb is a reporter at The Florida Capital Star and The Star News Network. Follow Grant on Twitter and direct message tips.
Photo “Laurel Lee” by Laurel Lee.