Commentary: This Is No Time for Bipartisanship 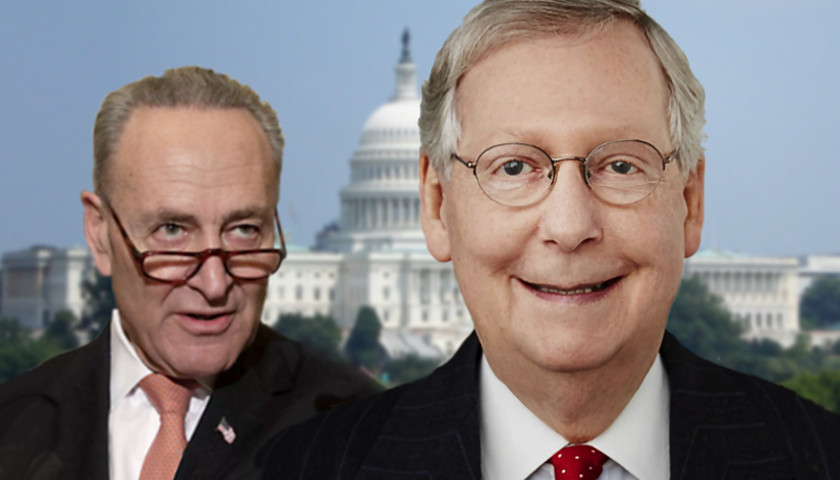 “The Left, in revolutionary fashion, has waged a sustained and unapologetic attack on constitutional norms and long-held institutions—whenever it senses they no longer prove conducive to its own radical agendas.” So begins a trenchant commentary by Victor Davis Hanson on the repeated efforts of Democratic Party leadership to overthrow America’s constitutional republic. Hanson’s remarks stand in stark contrast to a famous interview given to Salon by Dana Perino in 2018, in which the former presidential press secretary was hailed as the “voice of reason.” Perino expressed disappointment that neither party “was talking civility” and considered her own party as much to blame for this incivility as the other one.

These divergent views came to mind as I thought about how our two Senate leaders, Chuck Schumer (D-N.Y.) and Mitch McConnell (R-Ky.), rally their troops. McConnell is a politician deeply invested in bipartisanship. He is what the French call un maquignon, a horse-trading politician, whose livelihood is deal-making. Occasionally McConnell does advance the cause, e.g., helping Trump win Senate confirmation for three justices despite strong Democratic opposition; and keeping a hack leftist, Merrick Garland, from being elevated to the Supreme Court. But for the most part, McConnell sees his role as horse-trading, e.g., passing in conjunction with the Democrats a “red flag” law for would-be gun owners, while looking for other projects the two parties can tackle together. McConnell obviously didn’t relish having to deal with the more pugnacious Trump and bitterly declaimed against him after January 6.

Chuck Schumer, however, views his charge quite differently. He is there to raise hell and, if possible, to establish a one-party woke dictatorship. Anything that will increase the permanent hold of his party on the political system is fine with Schumer. He knows he can count on public administration, surveillance agencies, and an obliging media-educational establishment, to cover for him and his party, no matter what subversive activity in which they may engage. If Chuck doesn’t like how a Republican-appointed justice hinders his agenda, he hurls threats at him or her from the steps of the Supreme Court.

There seems to be a glaring mismatch between the two sides and their Senate leaders. Unless they play by the same rules, however, we may be headed for a situation that bears some resemblance to the one that caused the Nationalist uprising in Spain in July 1936. As the leading historian of that cataclysm Stanley Payne shows, by the summer of 1936, the leftists running the government had abandoned any semblance of fair play and could scarcely be described as constitutionally minded. Much of the Spanish Left energetically supported three coups against the Spanish Republic, did nothing to stop assassinations and bombings carried out by anarchists and radical socialists, and after February 1936 jailed their opposition. Although the uprising against the Left did not lead to the restoration of constitutional government in Spain, it may have been warranted, given the extent to which order had broken down. Although I doubt we can muster a Right as large and determined as the one that existed in Spain in 1936 or that we’re on the verge of the long, bloody civil war of the kind that lasted there until 1939, our ideological divisions seem every bit as profound.

In any case, the mismatch that now exists between our revolutionary Left and their mostly tepid, confrontation-shy opposition cannot go on indefinitely. Those playing defense must learn to battle back or else retreat into historical irrelevance. Just about all Senate Democrats voted twice to remove Trump from office, supported a congressional bill that would have legalized abortion up until birth everywhere, and endorsed the federalization of elections without safeguards. They also openly flout Supreme Court decisions, whether on abortion or the carrying of concealed weapons, if these decisions don’t advance their interests.

Democrats sat smiling as the summer of violence their leaders financed raged on two years ago. And they are not exactly broken up that their partisans are now threatening the homes and lives of uncooperative Supreme Court justices. Not a single Democratic Senator broke rank to vote for any Trump pick for the Supreme Court; nor can I recall Democrats who voted to confirm any Trump cabinet appointee. Where exactly do we find evidence of Democratic bipartisanship?

At the very least Republicans should stop speaking about restoring a relationship that no longer exists. It should stop imagining that a return to bipartisanship will occur if their side “cooperates.” The late, esteemed Angelo Codevilla issued this warning to the Democrats in September 2021:

The Democratic Party’s practical error, with regard to vaccination as with regard to the way it ended the U.S. presence in Afghanistan, is the hubris by which it has forgotten that when you make war on anyone, they may well make war on you.

We are still waiting for Codevilla’s prediction to come true, which means for a Republican opposition to push back with vigor.