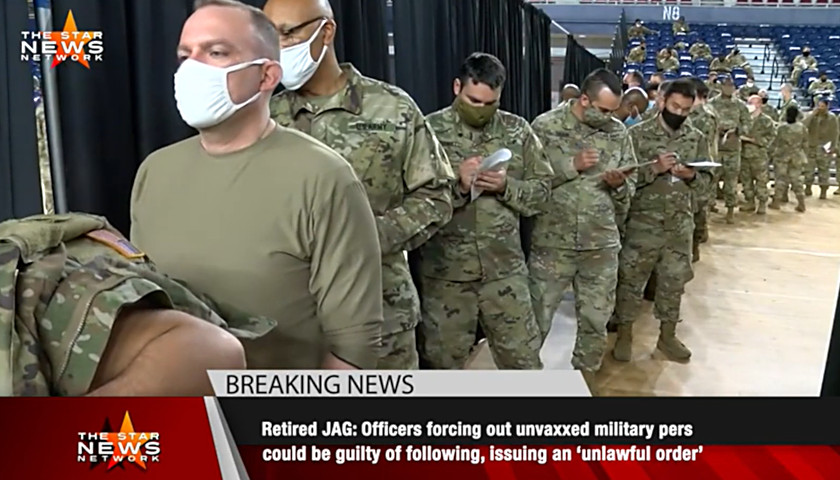 Neil W. McCabe, the national political editor of The Star News Network, interviewed former Army JAG attorney Sean Timmons, a partner at Tully Rinckey, about how officers enforcing the military’s COVID-19 vaccine mandate could be sanctioned for issuing and or following unlawful orders.

McCabe: Big Army’s June 30th deadline has passed for all members of the Army National Guard to receive the COVID-19 vaccine. So upwards of 40,0000 guardsmen, including more than 500 in Tennessee, are on the block. The Tennessee Star and The Star News Network spoke to attorney Sean Timmons, a former Army JAG (Judge Advocate General) lawyer, about how officers facilitating the involuntary separations could be charged with issuing or following an unlawful order.

Timmons: The vaccine enforcement policy is creating a lot of activity by senior military members where they’re engaged in unlawful actions and engaged in unlawful behavior that could result in prosecution and liability down the road if the political climate were to change. The problem with enforcement is, the courts are extremely deferential to anything the military does.

McCabe: The former Army JAG officer said the United States is party to legally binding treaties consistent with the Nuremberg Code that prohibits forcing individuals to participate in experimental medicine.

Timmons: The Convention on Human Rights and Biomedicine was signed in 1997. There are several treaties that exist when it comes to human rights and medicine, and many of these treaties are enforceable pursuant to national law, as America is a signatory of several of them.

McCabe: Military leaders could be held accountable if they willfully ignored those treaties, he said.

Timmons: There could be repercussions for individuals enforcing something that’s unlawful in violation of national law. That would need – unfortunately, I believe, the executive branch and most of Congress, is kind of complicit in ignoring the statutory guidelines that would flow from complying with treaties.

McCabe: Service members do not lose their right of conscience, he said.

Timmons: Individuals don’t lose their first free exercise to your religion, right, when you join the military? Your freedoms are limited to some extent contractually, but you still maintain your right to practice your faith, and that’s not something contractually you can sign away.