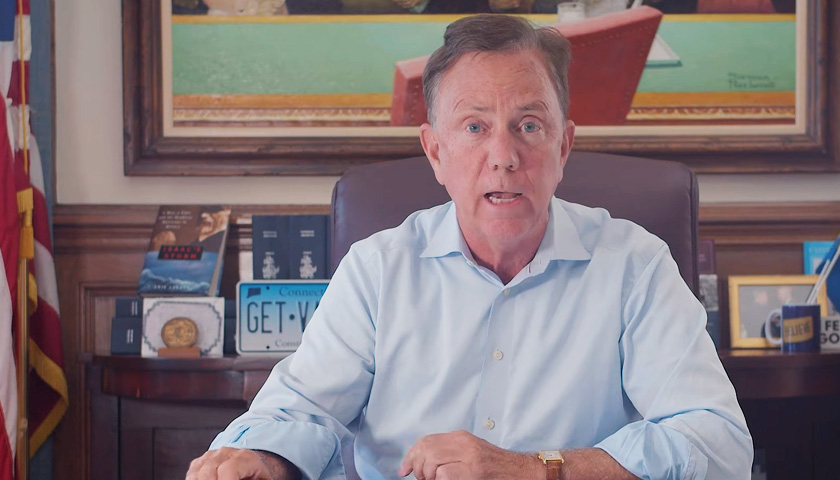 Connecticut Governor Ned Lamont’s (D) recent video pitch encourages businesses to relocate to his “family friendly” state where women are welcome to end the lives of their unborn babies, but neglects to mention how his 23 percent tax increase in diesel fuel, now in effect, is crushing businesses and consumers already reeling from unprecedented inflation and high gas prices.

“With the Supreme Court’s decision to overturn Roe v. Wade, there are many states across the country outlawing a woman’s right to make her own reproductive choices,” Lamont says in his video pitch, released Friday.

“Not here in Connecticut, not as long as I’m governor,” he declares, adding:

So, this may be a time for you to think about taking a look at Connecticut as a place to move your business place. Maybe your employees feel more at home, perhaps you feel more at home, your customers could better identify with our values. And when you’re ready to start a family, we are the most family friendly state in the country.

Lamont claims the state’s programs such as “paid family leave,” “a wonderful expansive daycare and childcare system,” and “we will train your workforce on our dime to make sure you have nowhere further to look” are big reasons why businesses should look to “family friendly” Connecticut.

Former Planned Parenthood Director-turned pro-life activist Abby Johnson commented to The Connecticut Star on Lamont’s attempt to lure businesses with abortion and the paradox of the governor referring to his pro-abortion state as “family friendly.”

“These businesses and state governors are so out-of-touch with America,” she observed. “Most Americans want abortions restricted during the majority of pregnancy in the second and third trimesters. Yet radical pro-abortion governors, most often of states that are failing their citizens with oppressive taxes like California and Connecticut, are so frantic for dollars they are resorting to the promise of ending innocent life in the womb in exchange for more businesses coming to their states.”

Lamont’s pet programs come at a great cost, as a report at The Center Square noted last week.

Yankee Institute Director of Policy and Research Ken Girardin observed the real situation is that Connecticut residents continue to struggle with one of the highest tax burdens in the country because of the tremendous costs associated with state and local government:

In April, Connecticut lawmakers approved a contract with state workers that will give employees raises averaging about 15% by July 2023, on top of $3,500 bonuses, without any sort of measurable givebacks. The agreement even included bonuses to workers set to retire just weeks after they were received in a deal that amounted to little more than a payoff to state employee unions. Meanwhile, lawmakers in the just-passed state budget left in place Connecticut’s elevated income tax rates. Instead of using the projected surplus to lower taxes, lawmakers spent them on election-year tax gimmicks and more programs.

“Connecticut residents face one of the highest tax burdens in the nation because of the incredibly high costs associated with state and local government.” YI’s @PolicyEngineer shares more with @TheCenterSquare. https://t.co/vPcDoVduJG

Connecticut Republicans also sharply disagree with Lamont’s optimistic message attempting to lure businesses, asserting “CT is not affordable, and CT Dems are doing nothing to change that.”

Connecticut Senate Republicans have accused Democrats leading the state of rejecting their calls “for a special session to provide energy assistance and additional tax relief to ease burdens on CT residents.”

And for businesses and consumers, Connecticut Senate Republicans observed the crushing burden placed upon both by Democrats’ 23 percent tax increase in diesel fuel.

“Truckers drive America,” Hancock said. “All the goods that are here in Connecticut come in from truckers. So punishing truck driving companies is going to have a negative effect on people’s wallets as well when prices are already high.” https://t.co/4Kt2jlCpgG

The state’s diesel fuel tax jumped Friday to 49.2 cents per gallon from the former 40.1-cent rate.

“Truckers drive America,” said Chris Hancock, general manager for Daniels Moving & Storage Inc. in Arizona, as reported by the Hartford Courant. “All the goods that are here in Connecticut come in from truckers. So punishing truck driving companies is going to have a negative effect on people’s wallets as well when prices are already high.”

When the tax increase took effect Friday, Hancock’s total cost rose over $600 while pumping gas at the Truck Stop of America in Southington.

“The price of diesel right now is really hurting the trucking industry and Americans as well,” he added. “This is just not the time to raise prices, especially as diesel has doubled just this past year alone. Companies were already struggling before the increase.”

Lamont, however, is hoping the promise of abortions can draw businesses to his state.

The German-owned Politico also reported following the High Court’s ruling California Governor Gavin Newsom (D) reached out to businesses that may have already left his high-tax state, urging them to consider returning to California, where abortions are plentiful.

The pro-abortion types like to call themselves “pro-choice” but then proceed to burn down pregnancy centers that provide women with a choice other than abortion.

“Connecticut Governor Lamont’s pitch to businesses is especially laughable as he calls his state the most ‘family-friendly’ in the country while promoting his own policies of permissible abortion more than halfway through pregnancy,” said Johnson, now the CEO of And Then There Were None, a ministry that helps abortion workers leave the industry.

“That is not how businesses operate and it only makes these radical pro-abortion states look desperate,” she asserted.