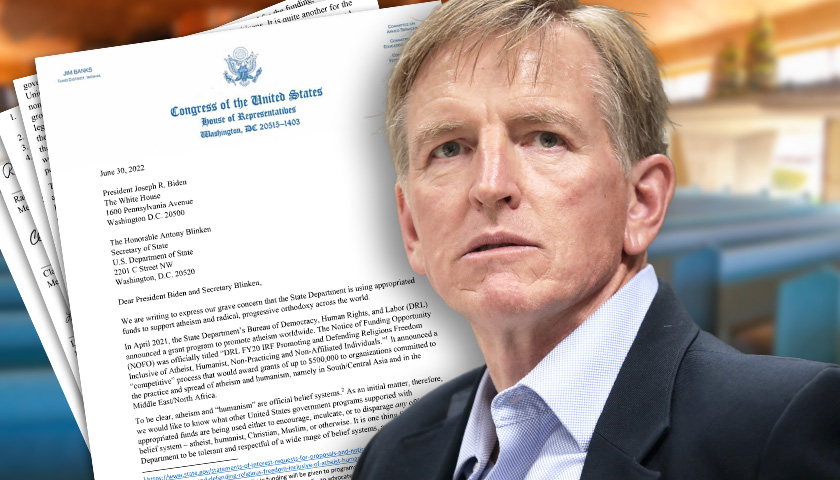 Arizona Representative Paul Gosar (R-AZ-04) co-signed a letter recently sent to the U.S. Secretary of State Antony Blinken (D) and President Joe Biden (D) that speaks against the Biden administration’s granting of funds to international organizations committed to the practice and spread of atheism and humanism.

“Of course, we all know that America was founded largely by Christians who wanted to escape oppressive dictators and the State Church of England,” Gosar said in his weekly update letter. “Beginning in the 1960s, leftist activists posing as judges started to dismantle our Christian heritage and iconography. Crosses were ordered removed from parks. A prayer before school was limited then banned. The left did their best to remove our Christian culture from public life. I am working to reverse that cultural cleansing with others in Congress and to restore our Christian heritage.”

Gosar said that on top of efforts to scrub away Christianity in America, the Left is “turning their attention to the rest of the world.”

The Notice of Funding Opportunity (NOFO) was officially titled “DRL FY20 IRF Promoting and Defending Religious Freedom Inclusive of Atheist, Humanist, Non-Practicing and Non-Affiliated Individuals” and offered a competitive process that would reward up to $500,000 to any organizations that promote and spread these belief systems in notable regions like South/Central Asia and the Middle East/North Africa.

“To be clear, atheism and ‘humanism’ are official belief systems. As an initial matter, therefore, we would like to know what other United States government programs supported with appropriated funds are being used either to encourage, inculcate, or to disparage any official belief system – atheist, humanist, Christian, Muslim, or otherwise,” according to the letter.

The letter clarifies that promoting religious freedom is not the same as actively empowering a particular religious belief. The group claim any program like this is unconstitutional and questions how it helps America’s foreign relationships.

“This is not ‘religious freedom.’ This NOFO, like others we have reviewed, prioritizes atheists and humanists above all other potential recipients. Not only does such a priority violate both the Establishment and Free Exercise Clauses, but also the No Religious Test Clause of Article VI of our nation’s constitution,” according to the letter. “In addition to its constitutionally dubious legal foundation, we also question how such a grant or cooperative agreement program advances the foreign policy interests of the United States. Were such programs known by the citizens of the target countries, we would expect that local populations, interest groups, and governments would bristle at what any ‘objective observer’ would see as ‘covert’ funding from a foreign power designed to shatter local religious and cultural relationships.”

The group argued that a Christian version of this grant would be flagged and ridiculed by leftist bureaucrats. The Republicans ask why people do not hold this grant under the same scrutiny.

The letter ends with 12 questions from the group, asking if the State Department plans to make other programs promoting other religions and how deconstructing America’s image as a nation of faith improves its standing in the world, among other issues.

The group of Republicans asked for a response by July 15th.