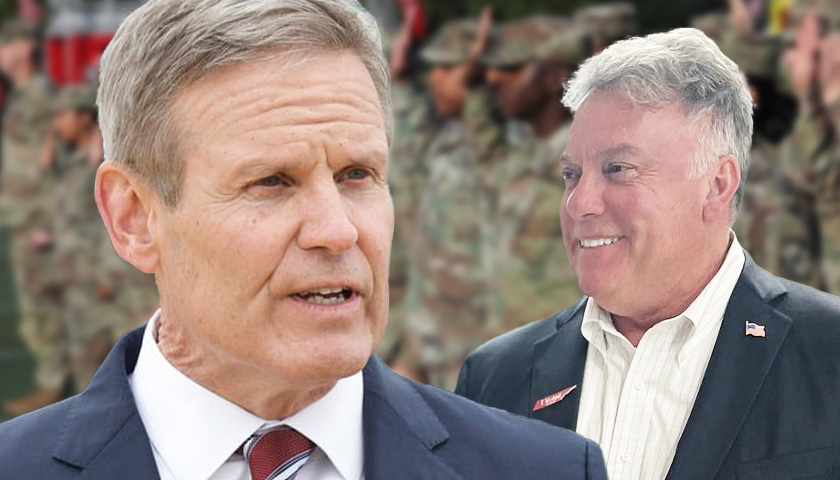 More Tennessee National Guardsmen reached out to The Tennessee Star on Friday in order to rebut the coordinated messaging between TN-5 candidate and former National Guard General Kurt Winstead and Governor Bill Lee on the issue of soldier firings due to a COVID-19 mandate and the role that the governor can play.

The deadline for soldiers to comply with the mandate has now passed.

“It’s a coordinated message. Look at the timing and the content of the message. Winstead goes on the radio and says one thing and then two hours later Bill Lee says basically the same thing on the same station. There’s no way they are not coordinating their message, in my opinion.” said a guardsman.

Both Lee and Winstead have placed the blame squarely at the federal level, insisting there is very little that the Tennessee governor can do to stop the firings.

All of Lee’s publicly available statements have been a variation of the message sent to legislators and later on, the media.

We take seriously the religious and personal exemptions requested by members who are not part of the 93% who are vaccinated in accordance with DoD policy. We have no plans to terminate these members based on their status and have asked DoD to approve their individual exemption requests.

“What Winstead failed to mention (and knows full well) is that while the federal government does fund the National Guard, the control of those troops belongs to the state, and the governor is their Commander in Chief unless they are deployed overseas,” another Tennessee National Guard member told The Star.

“This is the sin of omission and that makes it a blatant lie,” stated a frustrated member. “He has commanded thousands of troops and there is no way he doesn’t understand the law regarding Title 32.”

There are three ways that a National Guardsman can serve and be compensated:

These orders are typically used for short-term responses like local disasters or state emergencies like tornado response, civil unrest support, and were even used in the National Guard’s effort to combat COVID-19 in 2020-2021. Under these orders, the state provides all funding and control. There is no federal contribution or oversight.

Title 10 orders are under the statute under which all active duty service members serve, including all of those that are in the Reserves for all branches (Army, Navy, Air Force, Marines, Coast Guard, Space Force). Under these orders, the Department of Defense provides all funding and control.

The Tennessee National Guard only falls under Title 10 during a federal activation, typically for overseas deployments.

Title 32 orders apply exclusively to the National Guard. It is the status under which they serve most of their time, including weekend drills, annual training, and schools. Under Title 32 status, the National Guard remains under “the command and control of their respective governors but is funded by the Department of Defense (DoD)”.

“It’s infuriating that both General Winstead and Governor Lee refuse to confirm that the governor has the control and authority over his Title 32 troops and can dispatch Attorney General Slatery to file a lawsuit and get an injunction to stop this,” a guard officer said.

“In my opinion, this makes both Lee’s and Winstead’s integrity look questionable. The people of Tennessee need to hold Lee accountable and the people in Tennessee’s 5th Congressional District need to know what they are getting from Winstead if they vote for him,” the officer added.