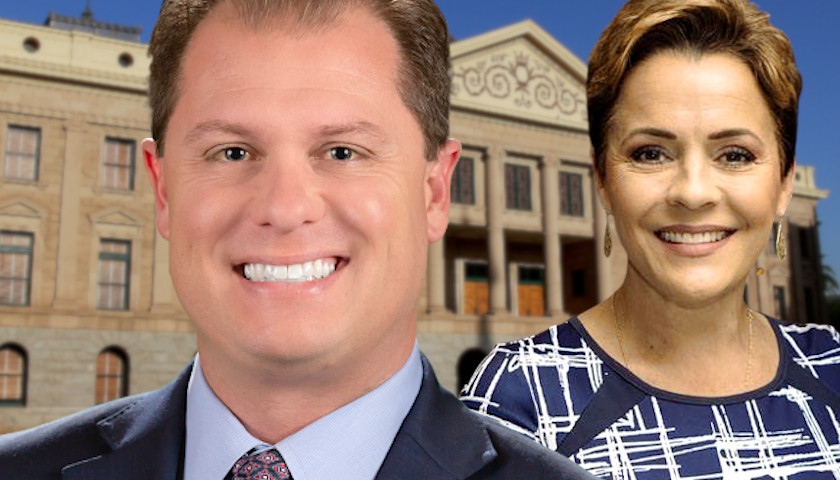 With Salmon out of the running, the Arizona race for governor is down to two major candidates on the Republican side.

“A lot of good, principled, stalwart conservatives were supporting Matt,” he said. “Matt was proven. Matt is out of the race now. Kari Lake is the ONLY America First candidate in the race for Governor now.”

Hoffman cited his own conservative record as “one of the most conservative members of the Arizona Legislature” to back up his endorsement. Hoffman was the only Arizona legislator to receive a 100 percent rating last year from the American Conservative Union. He was also one of only seven Arizona legislators to receive a 100 percent rating from the Arizona Free Enterprise Club.

Hoffman said Lake “will work hand in hand with conservatives to accomplish the America First agenda. You thought Florida was the conservative gold standard … just wait until you see the incoming conservative Arizona legislature with Kari Lake as our governor.”

Salmon was unable to gain any traction throughout the race, and dropped even further behind when former ASU regent Karrin Taylor Robson began spending a considerable amount of money. A poll earlier this month from the Trafalgar Group showed Lake with a 12-point lead over Taylor Robson at 38.5 percent. Robson had 26.7 percent and Salmon was well behind at 14.7 percent. The two other GOP candidates, Paola Tulliani Zen and Scott Neely, are polling at around 1 percent each.

Salmon was rated 94.81 by the American Conservative Union for his years serving in Congress, gaining the support of the conservative base for years. However, his work with the Chinese Confucius Institute at ASU, combined with lobbying for ASU, angered many conservatives in recent years.

Robson may not get as much of a bump from Salmon’s endorsement as expected due to voters being unaware he dropped out of the race. Having quit after the ballot-printing deadline, his name will remain on ballots, which will be mailed out starting next Wednesday.

Former Arizona Republican gubernatorial and congressional candidate Christine Jones told KJZZ she expects 20,000 to 25,000 voters will mistakenly vote for Salmon. In the 2018 gubernatorial primary, which set Ducey off against former Arizona Secretary of State Ken Bennett, there were 665,447 votes cast between the two, which translates to 3 to 4 percent of voters.

Jones believes Lake can increase her support above 35 percent. “Some of the true conservatives … will throw their support behind her once the ‘third term of Ducey’ message gets out. And in a four-person race, you don’t need much more than 35 percent to win a plurality to get to the general election.”

Lake has repeatedly attacked Taylor Robson’s record for being moderate. As a regent, Robson voted against a bill that the Arizona Legislature was considering – which is now law – banning abortions for fetal abnormalities like Down syndrome. She voted to give illegal immigrants subsidized tuition at Arizona universities, lower than American citizens in other states pay. Arizona Attorney General Mark Brnovich sued the universities over this and forced them to stop the practice.  She worked as a paid lobbyist for the leftist, open-borders Chicanos por la Causa in 2018.

A long list of conservatives have endorsed Lake. Whereas Taylor Robson has attracted a significant number of endorsements by moderates, including State Senator T.J. Shope (R-Florence), who received one of the lowest scores from the American Conservative Union among Republican legislators in Arizona – 78 percent.

Political consultant Stan Barnes, who is the president of Copper State Consulting Group and a former Arizona state senator,  told The Arizona Sun Times, “Salmon voters looking for a home will mostly migrate to the Robson campaign. But voters don’t always get the memo on how they are supposed to behave. And while the Salmon resignation represents an opportunity for the Robson campaign to try to get out of perpetual 2nd place in the polls, it is also an opportunity for the Lake campaign to coalesce an even larger lead in the primary.”

Arizona-based conservative consultant Constantin Querard, who is also not working for any gubernatorial candidates, agreed that many of Salmon’s supporters will flock to Lake.

“Matt Salmon did what most candidates are incapable of doing, and that is he recognized he wasn’t going to win, and he decided that he shouldn’t waste his supporters’ time or money on a predictably negative outcome,” Querard told The Sun Times.  “Most candidates’ egos get in the way and they stay in. Salmon voters who were conservative, Ron DeSantis type voters should likely flow to Lake, while supporters who just genuinely liked Matt may have been turned off by how badly Lake treated him during the primary.”