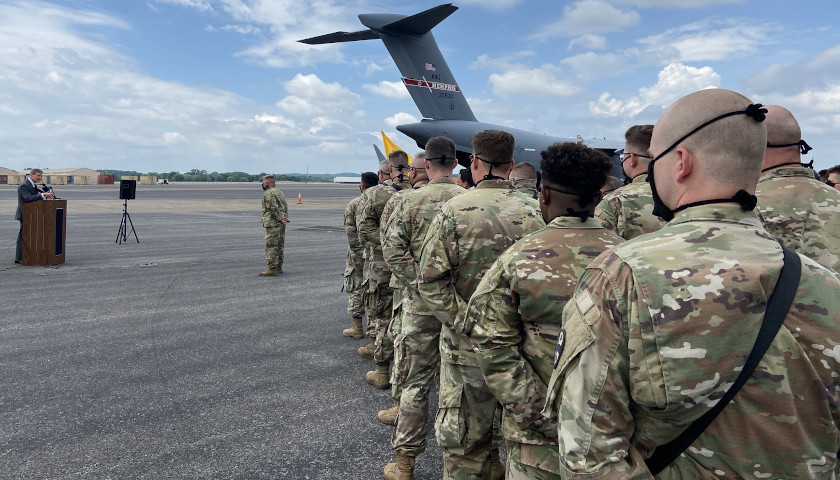 As the final days and hours passed leading to the June 30 mandate deadline that requires 100 percent COVID-19 vaccine compliance by all federal personnel, including Tennessee Army National Guard members, Governor Bill Lee appeared to deflect when he spoke about his actual role in deciding the fate of those guardsmen, who are about to be fired due to their refusal of the injections.

The Tennessee Star confirmed the authenticity of a message it previously obtained from Lee’s office, which read:

We take seriously the religious and personal exemptions requested by members who are not part of the 93% who are vaccinated in accordance with DoD policy. We have no plans to terminate these members based on their status and have asked DoD to approve their individual exemption requests.

Lee’s re-election campaign manager David Topping sent a similar message to the Davidson County Republican Party after the group issued a press release calling on him to take action to save the jobs of the guardsmen. 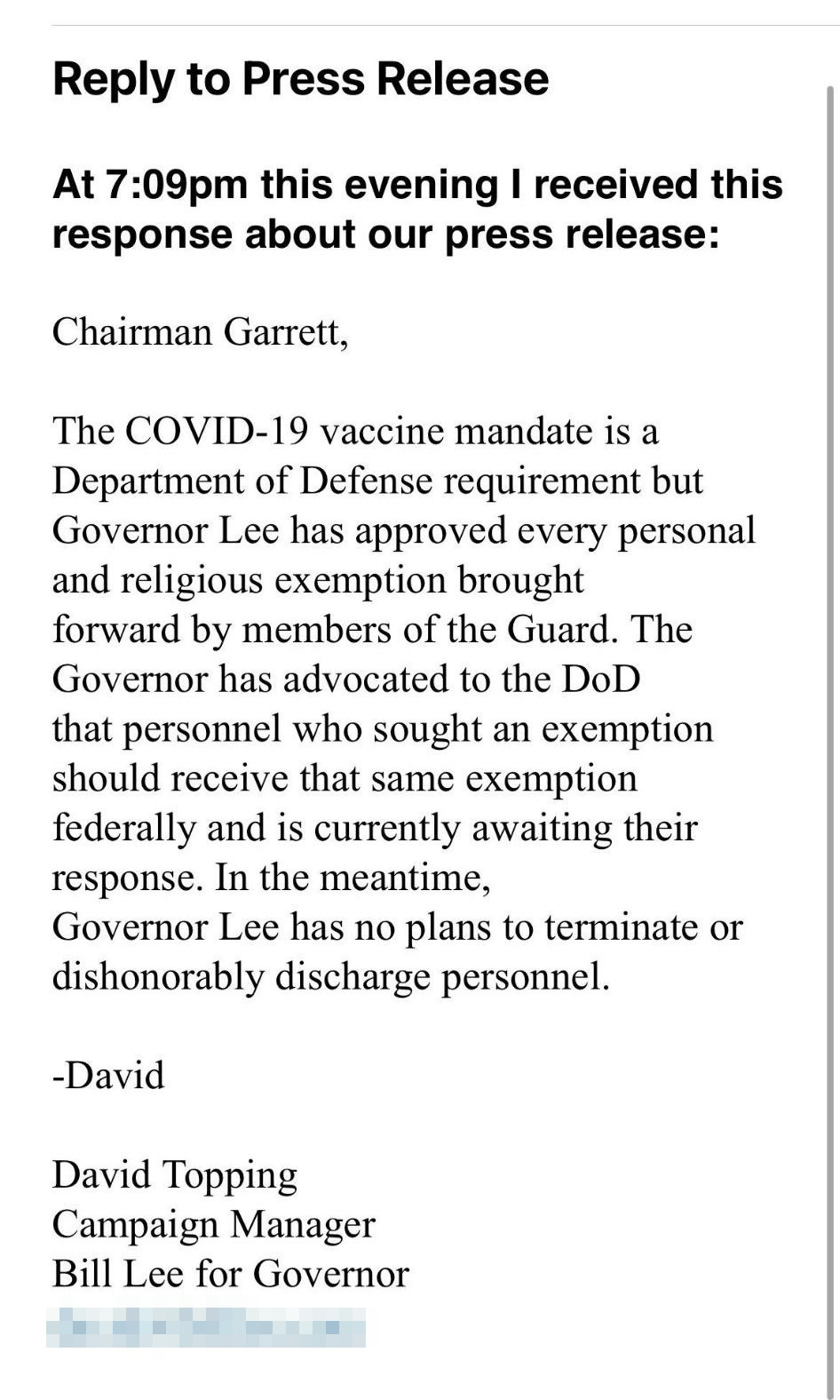 Several political watchers have said that it is inappropriate for Lee to use a campaign staffer to convey that message.

Lee echoed that message in several radio interviews and in a tweet.

We stand w/ our TN National Guard members & have asked the Biden Admin to approve all requests for religious & personal exemptions. While we await a response, I thank Senator @MarshaBlackburn for her leadership in Washington & partnership in fighting for what we believe is right. https://t.co/ZVyrRMes9U

Governor Lee’s message does not acknowledge his authority as Tennessee National Guard Commander-in-Chief under Title 32, which applies exclusively to the National Guard and is the status under which they serve most of their time, including weekend drills, annual training, and schools. Under Title 32 status, the National Guard remains under “the command and control of their respective governors but is funded by the Department of Defense (DoD).”

Furthermore, Lee was unresponsive to the repeated requests by guardsmen to ask Attorney General Slatery to file suit on behalf of the guardsmen and the guardsmen’s message that many of those being fired have not requested vaccine exemptions as those requests have widely been ignored.

Governor Lee’s messaging does not address the fact that a May letter containing orders sent to the guardsmen by their commanders is still in effect.

The letter says in part, “Unless otherwise exempted in accordance with Department of the Army policy, all members of the National Guard must be fully vaccinated by 30 June 2022.” The letter additionally describes how unvaccinated guardsmen turned in their gear and were excluded from drilling exercises well in advance of the mandate compliance deadline.

Guardsmen say they have not received orders or any document rescinding that letter. Neither Governor Lee nor the Biden administration have said that they have taken action to, or plan to in the future, rescind the orders in the letter.

Meanwhile, the governor’s statements have fallen flat with the Tennessee Army National Guardsmen, who are asking for his genuine help.

“We’re not sure what Governor Lee says he’s doing, but the one thing that is clear is he is not doing anything to help us,” one person said after first being read the message. Several others used the words “useless gesture.”

An Tennessee Army National Guard officer contacted by The Star elaborated, “[It] just looks like a useless gesture so he can say he looked into the matter and then he’ll issue a public statement saying that he did everything he could. This message does not contain anything about ordering his adjutant general to keep us on, a public condemnation of the vaccine mandate, or a statement saying he’s going to ask the Tennessee Attorney General Slatery to file suit on our behalf.”

Lee has focused his response, after a lengthy period of silence on the issue, on National Guard members who have requested exemptions.

“It also did not say anything about the hundreds of National Guardsmen who did not apply for an exemption because the DoD was not granting them,” a guardsman said.

Several soldiers have pointed out the governor has placed the blame squarely on the Biden administration, while ignoring his own role as commander in chief of the Tennessee Army National Guard.

“Governor Lee needs to publicly give us his support and to vow to do everything in his power, including asking for a Special Session of the General Assembly and ordering his attorney general to file suit, in order to help his men. He is our Commander-in-Chief and we need his help before we all get fired,” another guardsman said.

Lee is also actively enforcing the federal mandate on members of the Tennessee State Guard, an organization that is different than the Tennessee National Guard.

The Tennessee State Guard is an entirely separate force from the National Guard. It is composed entirely of unpaid volunteers who purchase their own uniforms and equipment, in order to augment the National Guard when needed. They are 100 percent controlled and funded by the state with no federal oversight. They were reportedly heavily utilized in Tennessee’s COVID response efforts.

The Tennessee Star previously reported a public affairs officer with the State Guard said that as a part of the state’s military department and under its commander in chief Lee, the State Guard follows the same COVID-19 vaccine rules as the state’s Army National Guard.

A source said, “The fact that Major General Holmes is enforcing the exact same vaccine mandate on these unpaid volunteers and that Governor Lee has chosen to allow it, is unconscionable and confirms that neither man supports us.”