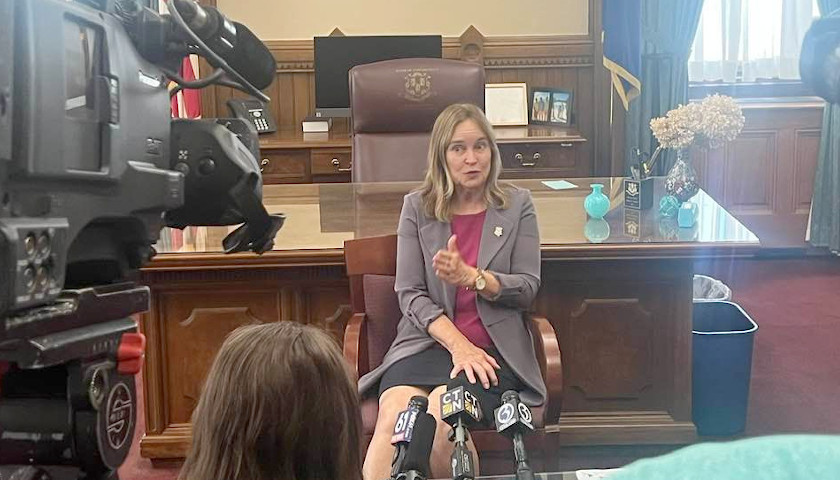 Connecticut Secretary of the State Denise Merrill (D) announced she will resign Thursday in order to spend time with her husband, who suffers from Parkinson’s Disease.

Merrill, 73, told the Associated Press (AP) trying to juggle her job with caring for her husband has grown too difficult.

“It’s too much for me. I can’t do both, and I have to be at home,” she reportedly said. “I don’t have full-time caretakers, and it wouldn’t work, anyway. He’s very dependent on me, and I’m dependent on him in a lot of ways.”

Merrill was first elected as the state’s top elections official in 2010. Prior to assuming her current role, she served for 17 years in the Connecticut House of Representatives.

She leaves amid the re-election campaign of Gov. Ned Lamont (D), who will choose her replacement since the General Assembly is not currently in session.

“Denise Merrill is a dear friend to me, and her exit from public service is a tremendous loss for the people of Connecticut,” Lamont said in a statement. Denise has had a long history of serving the public good in Connecticut and has become one of the most respected secretaries of state in the country.”

I am proud to have partnered with her on our collected efforts to increase access to voter registration, increase access to casting a ballot, increase election transparency, and streamline the way businesses interact with our state government. It can’t go without noting that our most recent statewide election resulted in the highest number of registered voters casting ballots in our state’s history, which is a credit to Denise’s efforts to encourage voter participation. Denise has delivered results, and our state is stronger because of her efforts.

In early June, Lamont and Merrill announced they would be hiring a full-time “misinformation” expert who will flag social media posts that suggest “bad information” about the state’s elections ahead of the midterms.

“We need to know what’s out there before it goes viral,” said Scott Bates, deputy secretary of the state, reported the New Haven Register. “We need to get ahead of the curve and knock down bad information to protect people from misinformation that would get in their way of voting.”

The “misinformation” expert’s duties include scouring “fringe sites like 4chan, far-right social networks like Gettr and Rumble and mainstream social media sites to root out early misinformation narratives about voting before they go viral, and then urge the companies to remove or flag the posts that contain false information,” the New York Times reported.

Lamont said he will appoint a replacement for Merrill soon.

Connecticut Republican Party Chairman Ben Proto said of the outgoing top elections official, “There has never been a question that Merrill is a dedicated public servant.”

“Even if we were not always on the same side of issues, I have always respected and appreciated the work she has done for the people of the state of Connecticut,” Proto said in a statement. “We wish Secretary Merrill and her family well and will keep her and her family in our thoughts as she leaves state service and prioritizes her family.”

Thank you @CTSotS Denise Merrill for your service and dedication to CT. While we sometimes disagreed on policy her commitment to CT both as a legislator & SOTS was undeniable. Will 🙏 for you, your husband and your family. @ctgop @CTDems @ctcapitolreport

Switching gears, Proto then stressed, “The real concern is, now what?”

The state GOP chairman pointed out Lamont “is under no obligation to elevate the notorious Scott Bates, the current deputy secretary of the state,” and warned of the “very real possibility that Bates would make a convenient temporary Secretary until this November’s election.”

A year earlier, The Day reported:

Not only did the port authority board sign a strange and lucrative contract with venture capitalists to help sign the New London port away to a competitor, but another board member, John Johnson of New London, continues to participate in votes and discussion of State Pier while he stands to profit by industrial property he owns nearby… Scott Bates of Stonington, a prominent Democrat who was chairman of the port authority board when the Seabury contract was granted, continues to serve as deputy to Secretary of the State Denise Merrill, who supported him as the scandals involving his stewardship of the port authority unspooled over the last year.

“The Governor is at a crossroads,” Proto said. “He can make the most of these remaining months of Secretary Merrill’s term and ensure that the interim Secretary of the State is committed to ensuring that our August primaries and November elections are well organized and fairly conducted, or he can fall back on classic cronyism.”

“I’m sure that whoever the governor appoints, we’ll be in good hands,” Merrill told AP, adding that “elections are strong” in Connecticut.

Among her accomplishments named to AP, Merrill listed increased digital security, making it easier for people to vote, a category that includes implementation of online voter registration, allowing people to register to vote on Election Day, drop boxes for absentee ballots, and automatic voter registration through the state’s motor vehicles department.

“I always make the point that Connecticut has great elections,” Merrill said. “We’re doing a wonderful job – 2020 was the best election I can remember, even in the face of COVID and all the changes we had to make.”