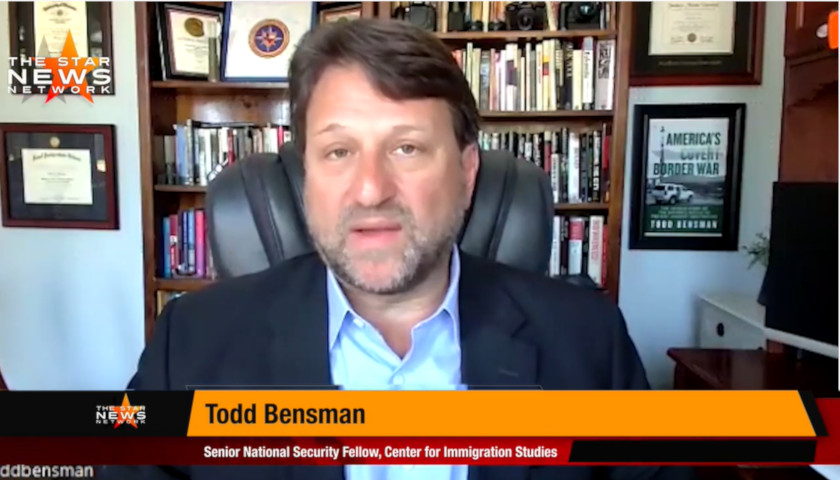 Bensman said most of the migrants crossing the border into Arizona are drug dealers and other criminals, or runners, who seek to evade border officials.

Then, at Yuma, because of a gap in the border wall, tens of thousands of migrants pour through, where they seek to be taken in by Border Patrol.

Todd Bensman, a senior national security fellow at the Center for Immigration Studies, has told The Arizona Sun Times and The Star News Network how Arizona’s border with Mexico presents unique challenges to American security.

Bensman: Arizona has a unique problem because most of the immigrants that are coming through there are going to be young men and drug traffickers.

McCabe: Bensman, the author of the book America’s Covert Border War, said the gap in the border wall at Yuma, Arizona, is a magnet for illegal aliens crashing the border.

Bensman: Yuma, Arizona, is one of the major volcanic eruptions for the mass migration crisis. They’re coming through Yuma by the thousands, tens of thousands a month.

McCabe: While migrants at Yuma seek out Border Patrol so they can obtain their parole to live legally in the United States, so-called runners who don’t want to be in the system exploit parts of the Arizona border the Biden administration abandoned, the author said.

McCabe: These segments now have organized ladder teams to help runners climb the wall, he said.

Bensman: When there is no patrolling, we have what happens in places like Douglas, where the wall is only 18 feet, it’s a Bush-era wall, and they have ladder crews that all night long are just climbing immigrants over that wall, sliding down on ropes.

McCabe: The other abandonment is by Arizona Governor Doug Ducey and his administration, Bensman said.

Bensman: The Arizona Department of Public Safety is AWOL from that border.