Host Leahy and All-Star Panelist Carmichael Roundtable Speculates on the Aftermath of Roe v. Wade Decision in the State of Tennessee 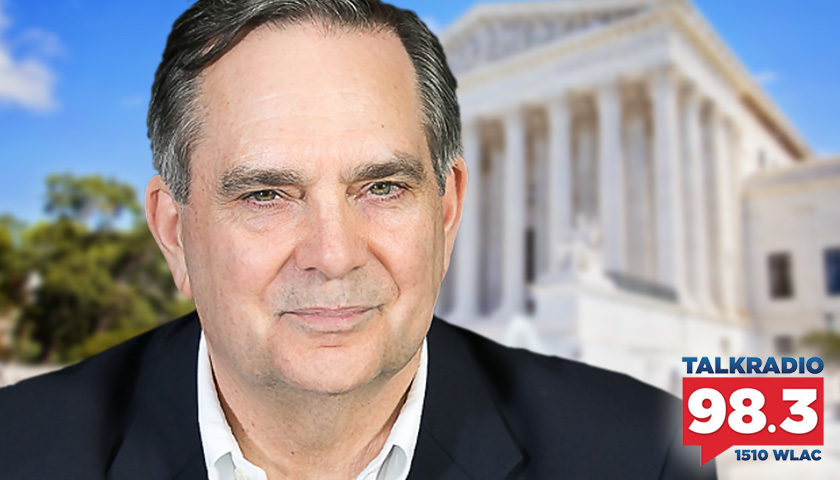 Live from Music Row, Monday morning on The Tennessee Star Report with Michael Patrick Leahy – broadcast on Nashville’s Talk Radio 98.3 and 1510 WLAC weekdays from 5:00 a.m. to 8:00 a.m. – host Leahy welcomed all-star panelist in studio to speculate what the aftermath of the Roe v. Wade decision would mean for the state of Tennessee and the proper course of action by the attorney general.

Leahy: Well, it’s that time of day. It’s time for our roundtable discussion with our original all-star panelist Crom Carmichael. Crom, on Friday, the Supreme Court ruled that Roe v. Wade would be overturned.

And now the question is, what’s the aftermath of all this, Crom? In particular, I want to talk about what’s going on here in Tennessee. So, a couple of pieces of news here.

The Tennessee General Assembly passed a law that was signed by the governor that – it’s a trigger law that said 30 days after Roe v. Wade is overturned, or there’s a constitutional amendment, the trigger law would go in effect. And in the state of Tennessee, abortions would be illegal after, in essence, a six-week gestation period.

The Attorney General, Herb Slatery, has filed a lawsuit with the 6th Circuit Court of the federal district courts to implement that immediately.

That’s one part of the story, but here’s the part of the story that I’d love to get your comment on. So, Davidson County District Attorney Glenn Funk has said he’s not going to enforce that law. Can he do that?

Carmichael: So it’s a mystery to me that someone who is in that position can come out and say, overtly, I’m not going to enforce the law. And this is not a trivial law. This is a major law. Because essentially what the legislature in Tennessee is saying is that life begins at the heartbeat.

That’s essentially what the legislation is that’s been signed by the governor. And for a local district attorney to say, “I personally don’t agree with it, so therefore I’m not going to enforce it.”

Leahy: That’s the trouble. And now the Tennessee General Assembly, anticipating this possibility, in, let’s say, Shelby County and Davidson County, passed a bill signed into law by the governor in 2021 that said, if the district attorney in any county fails to enforce the law, the Tennessee attorney general can ask the Tennessee Supreme Court to appoint a special prosecutor. And that special prosecutor can go forward. It seems to me that that would be the likely next step in this case.

Carmichael: And you’ve talked a lot about the need to hold public hearings, which I think is a wise thing to do. The position of attorney general in the state of Tennessee you’ve also said, and I agree with this also, that the most important single factor in their job is using their position to stand up for state rights against an ever-expanding federal government.

Leahy: Yes. And in this particular case, the way this has worked in the past, we’ve talked about the unusual circumstance of the selection of attorney general. In 44 states, the attorney general is directly elected by the people in five states, appointed by the governor, and then confirmed by the state legislature.

Only in Tennessee, which is this odd violation of, in my view, the constitutional principles of separation of powers. But it is, in fact, the Supreme Court that selects the attorney general.

Carmichael: So the only way to change that is to amend the constitution.

It is the Supreme Court that will pick the new attorney general. Now, there’s nothing in the Constitution at all that says the governor’s pick will be rubber-stamped. That has been the practice for the past several decades.

It’s a practice, I think, that needs to be changed. We’ve called on the Tennessee Supreme Court to hold extensive and robust public hearings on the qualifications of the eight finalists. You had suggested, I think, an outstanding candidate to be attorney general, Jim DeLanis.

Leahy: Who’s shown to be a man of courage and character. The chairman of the Davidson County Election Commission, who’s involved in litigation right now against his former employer, Baker Donelson, fired him because he wanted to have this taxpayer referendum go forward.

Carmichael: He thought that the law required him to move it forward on the appeal.

Leahy: We are waiting to hear from the Supreme Court as to who they’re selecting as the eighth … last time it was eight finalists. Anybody who is an attorney in the state of Tennessee can apply. If you are an attorney, would you apply for this job?

Carmichael: I’m not an attorney. That’s kind of a hypothetical. It wouldn’t matter.

I think he’s a strong attorney, but it’s because of his selection of cases to work on. Sometimes I don’t think he’s selected cases … he has not been robustly in support of the Tenth Amendment as it relates to the state of Tennessee. Although, of late, he’s finishing quite strong, it seems to me.

Listen to the Roundtable: