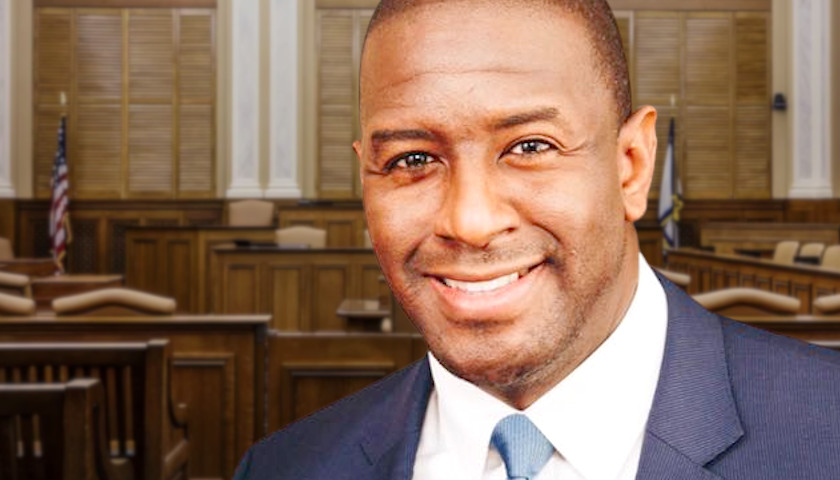 Florida gubernatorial candidate and former Tallahassee Mayor Andrew Gillum has been indicted on multiple charges connected to campaign contribution fraud before and during his 2018 run for governor of Florida. Gillum lost to Florida Governor Ron DeSantis in the general election.

The U.S. Attorney’s Office for the Northern District of Florida unsealed the 21-count indictment on Wednesday. One of Gillum’s closest advisers, Sharon Lettman-Hicks, also was charged in the 21-count indictment. Gillum, 42, and Lettman-Hicks, 53, were arrested on Wednesday and were scheduled to have their first appearance Wednesday afternoon at the U.S. Courthouse in Tallahassee.

The 26-page indictment indicates that the Gillum investigation was part of the comprehensive corruption probe that used undercover agents to get close to some of Tallahassee’s biggest movers and shakers. Former Tallahassee Mayor and City Commissioner Scott Maddox and his associate Paige Carter-Smith, along with Tallahassee businessman J.T. Burnette, were recently sentenced to prison as a result of the probe.

The indictment alleges that between 2016 and 2019, defendants Gillum and Lettman-Hicks conspired to commit wire fraud by unlawfully soliciting and obtaining funds from various entities and individuals through false and fraudulent promises and representations that the funds would be used for a legitimate purpose.

The indictment describes an incident in May 2018 when Gillum solicited and received a $250,000 campaign donation from “Individual F” for use in his campaign for Florida governor. However, instead of depositing the funds into a campaign account, the indictment alleges that Gillum and Lettman-Hicks caused the $250,000 to be wired to an organization that Gillum & Lettman-Hicks could control.

Eventually, $150,000 of the campaign donation was routed to a public relations firm and $132,500 was then disbursed to Lettman-Hicks and Gillum.

The indictment further alleges the defendants used third parties to divert a portion of those funds to a company owned by Lettman-Hicks, who then fraudulently provided the funds, disguised as payroll payments, to Gillum for his personal use. Both defendants are charged with 19 counts of wire fraud. Gillum is also charged with making false statements to agents of the Federal Bureau of Investigation.

In a written statement to NBC News, Gillum acknowledged the case but said it is politically motivated without offering specifics.

“I have spent the last 20 years of my life in public service and continue to fight for the people,” Gillum said. “Every campaign I’ve run has been done with integrity. Make no mistake that this case is not legal, it is political. Throughout my career I have always stood up for the people of Florida and have spoken truth to power. There’s been a target on my back ever since I was the mayor of Tallahassee. They found nothing then, and I have full confidence that my legal team will prove my innocence now.”