Crom’s Crommentary: No One in Biden Administration Offers Hope of ‘Doing Anything Right in Their Area of So-Called Expertise’ 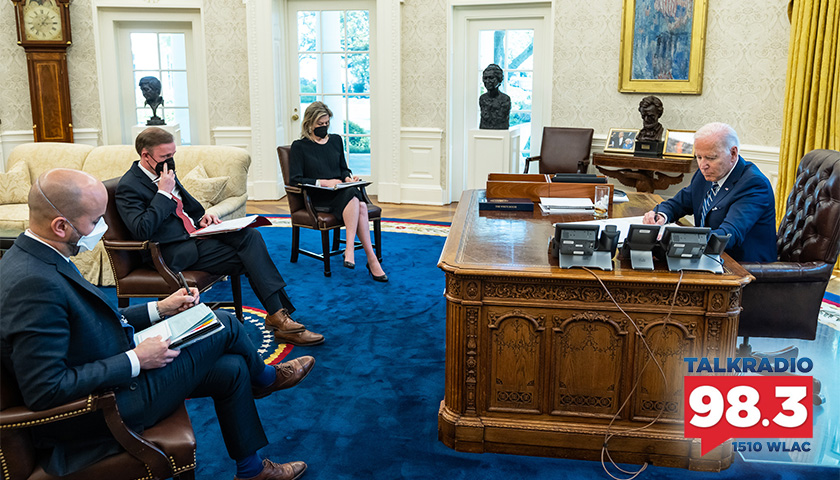 Live from Music Row, Monday morning on The Tennessee Star Report with Michael Patrick Leahy – broadcast on Nashville’s Talk Radio 98.3 and 1510 WLAC weekdays from 5:00 a.m. to 8:00 a.m. – host Leahy welcomed the original all-star panelist Crom Carmichael to the studio for another edition of Crom’s Crommentary.

I watched Maria [Bartiromo]’s show over the weekend, and she had some guests on – a former Federal Reserve Board member and then a fund manager whose name slips my mind, but a fellow who late in the fourth quarter went to cash,  took all of the money that he was managing and went to cash.

So that’s a pretty wise thing to do, and he explained why he did it. But the Federal Reserve Board member said two things that are distressing. He said, one is, the federal spending from Biden’s $2 trillion programs still hasn’t even hit yet. It’s just beginning now.

And the inflationary effect of that is not yet to be felt. He also said the quantitative tightening, which is essentially sucking funds out of the money supply, and has only begun also. But take that into … and then Maria pointed out the following on inflation.

And so exactly how you get to an 8.6 percent inflation rate with those things – and rent is also up over 20 percent – is a mystery to me. I know the people are hurting badly, the middle class especially, and people on fixed incomes are just getting crushed.

And the Biden administration is doing nothing about it. It wasn’t until this weekend that Biden said managing the economy is as easy as riding a bike. Well, we now know that with Biden’s case, that doesn’t work either, because he fell off his bike when it was standing still.

It takes a lot of work to fall off a bike when it is not moving. But he managed to do that. And the other thing that Maria pointed out that I knew existed, but not the extent of it, is the amount of damage that Biden’s regulations are doing to the economy. For example, [Pete] Buttigieg, who is the Secretary of Transportation, is now complaining that the airlines are canceling too many flights.

Well, it might have helped if they hadn’t forced the airlines to fire all those people who would not get a vaccination. The airlines make it very clear they’re very short-handed, and you don’t train an airline pilot with a two-week training program.

So the question for me is, if a public official who has sworn an oath of office to uphold the laws and execute the laws faithfully, if they take that oath, and then proceed to break the laws, they should be held accountable.

And the amount of smuggling, in fact – Maria had the Republican lady who won in the district in South Texas on the show, and she was talking about why South Texas is turning to the Republicans essentially as a plea for help because their communities are being overrun with drug smugglers and human traffickers.

It’s just terrible. And there’s not a single person, not one single person in the Biden administration who offers any hope for doing anything right in their area of so-called expertise.