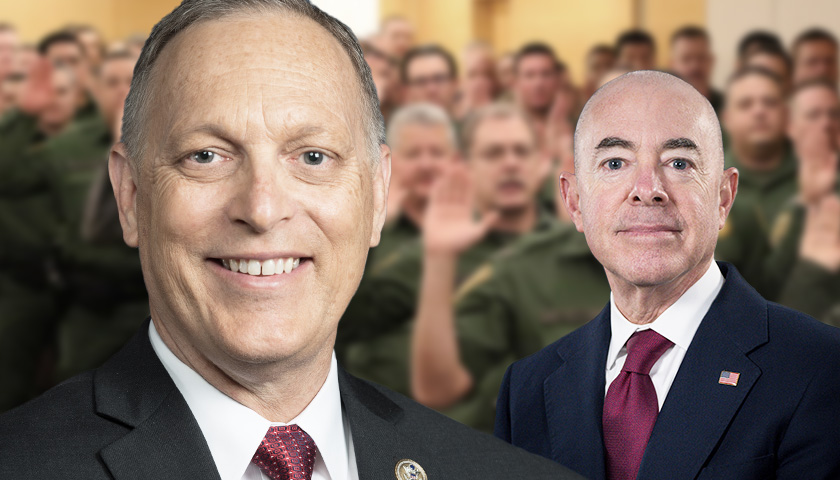 Arizona Representative Andy Biggs (R-AZ-05) sent a letter to U.S. Department of Homeland Security (DHS) Secretary Alejandro Mayorkas, demanding a briefing on the investigation into Del Rio, Texas, Border Patrol agents amidst reports that these agents will be disciplined.

The letter requests that Mayorkas provide the briefing by June 24, 2022. Biggs’s spokesman told The Arizona Sun Times that the DHS has not yet responded to Biggs’ letter.

“Disciplining innocent Border Patrol agents to pander to open borders advocates is a slap in the face to these dedicated men and women,” Biggs said in a press release. “President Biden promised to make ‘those people pay’ and now it appears that Secretary Mayorkas is following through on that promise even though there is not a shred of evidence suggesting any wrongdoing by these agents.”

Biggs made further statements slamming the effort to punish the Border Patrol agents.

“Punishing these individuals for trying to secure the border amid the worst border crisis in American history sends the message to all DHS employees that they will be punished for merely doing their jobs. Secretary Mayorkas must explain his actions to Congress,” Biggs said.

Biggs’ letter is signed by 25 other Republicans, including Arizona Representatives Paul Gosar (R-AZ-08) and Debbie Lesko (R-AZ-08). The letter outlines that President Joe Biden (D) is doing the will of “radical, far-left, open border supporters” and that disciplining the agents is another example of pandering to these supporters.

The letter also outlined that Mayorkas failed to keep his promise and fulfill his duties. Mayorkas testified that the investigation into the Border Patrol agents would be completed “in days and not weeks,” a statement made nearly nine months ago. Furthermore, Biggs stated that rather than punishing the agents that uphold the law, Mayorkas should be focused on upholding the law himself and securing the border.

According to Fox News, the DHS is preparing to discipline multiple horseback Border Patrol agents for an incident that occurred in September when images emerged of agents keeping a large crowd of Haitian migrants from entering the country, one image showing an agent grabbing a migrant by the shirt. Democrats claimed the agents were whipping migrants; however, this claim has since been proven false. The “whips” were the agents’ long reins being swung to direct the horses.

The DHS is expected to discipline the agents with “administrative violations.” The agents will have the opportunity to respond and either accept the discipline or fight it.

A federal source told Fox News that an announcement on this matter is expected in the coming days.

As reported by The Sun Times, National Border Patrol Council President Brandon Judd said the agents were cleared of criminal misconduct during the investigation.

“The only reason that we know that they [the Border Patrol agents] were cleared is because OPR [Office of Professional Responsibility] started their investigation and they compelled them to give a statement,” Judd told the Daily Caller News Foundation. “Once you compel somebody to give a statement, you can’t take criminal action against them.”