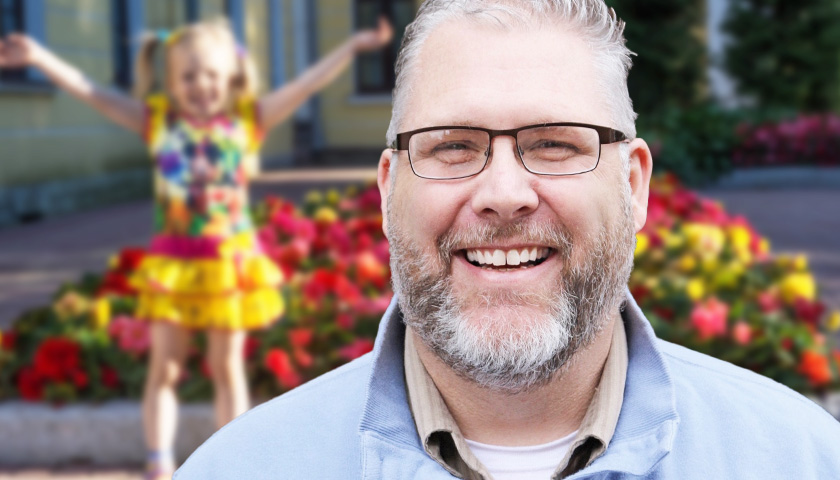 NASHVILLE, Tennessee – The Tennessee Star spoke with the Vice President of Engagement for Lifeline Children’s Services, Rick Morton, at the Faith and Freedom Coalition’s Road to Majority Conference about his family’s adoption of children from Ukraine and how the current situation is affecting children in that nation.

Rick and his wife Denise have been married for over 26 years, and they have 3 children, all of whom became part of their family through international adoption.

Morton grew up in Tennessee, went to high school in Memphis, and achieved his undergraduate degree from the University of Memphis. He said that he grew up in a moderate-size Baptist church and felt a call to ministry in his youth. He later served as a youth pastor in a few Southern Baptist churches and right out of school started teaching. One of those places was Bryan College in Dayton, Tennessee.

Morton and his wife were living in Louisville when they felt the call to get into adoption. His family has adopted several children from Ukraine.

“My joke is, I’m a kid in the south who grew up in school and couldn’t find Ukraine on a map, mostly because it didn’t exist back then as it does today,” he said.

“One of the things we’re missing in the modern church is this sense that I think God wants to reveal himself through the way that we care for orphans and vulnerable children. That’s evidence in the Old Testament and throughout the New Testament. There’s a thread of meaning where God is basically putting his redemptive love on display through his people,” said Morton.

“God says to us go do this thing, which is kind of peculiar. He called Israel and he calls us as his people to be different. Through that, we moved through the process of understanding adoption. We began to step into that process and everywhere we turned the nation of Ukraine seemed to come up,” he added.

Morton talked about his many visits to Ukraine and the ministries he engaged in during those trips.

“We just kind of walked through a season where everywhere we turned we bumped into things about Ukraine. Slowly but surely, it began to dawn on us that this is probably the place that we should zeroing our efforts towards adoption in. I made my first trip to Ukraine in the winter of 2003,” he said.

“Over the course of the last 19 years, going on 20 years, I’ve been there 26 times. That’s involved being a part of adopting, orphan care projects, speaking to churches and pastors and Ukraine – I actually served as a visiting professor at Kiev Theological Seminary for about eight years,” Morton continued.

Morton described what visiting Ukraine was like for the first time and the changes he observed over the years.

“In the early years, going in 2003 is felt very Soviet in some ways. Everybody wore black. It seemed like the sky was gray and the building were gray. I remember going to Kiev the first time and there weren’t western signs or western shops. There was really a lot like it had been in 1999 and 2000,” he said.

“Over the years it began to transform into a place that was much more western influence. It was long before we saw shops that had designer clothes. You went from seeing these boxy Soviet cars to these western cars like Lamborghinis and Mercedes,” described Morton.

“I think the people when we went early on were still influenced by the political environment. they were sort of stoic and reserved – maybe a little bit of an institutional mistrust,” he said.

Morton discussed his interactions with Christians and the Ukraine government.

“Christians, however, that we interacted with were wonderful. They understood the freedom that they had been given. They understood that the things they had to do under the cover of darkness for years and years – now they were able to come into the light,” he said.

“Over the years we had many interactions with the government and had some really fantastic experienced and people who were public servants for the right reasons. There was also a specter of corruption that wasn’t below the surface, it was right at the surface. It just kind of depended on where we were,” he explained. “There was this time in Crimea that I know that we were followed by kind of the antecedent of the KGB and definitely felt like there was sort of a Russian lifestyle and government. That would have been in 2011.”

“Our third child that we adopted was 14. We spent several months there. There were no problems, but maybe a pall of suspicion. I think people were not used to interacting with Americans,” he said.

“Our family really just came to have a deep love for Ukraine and for the Ukranian people. Our kids are proud of their heritage and very connected to the nation of their birth,” he emphasized.

“I was fortunate to be in a place where the things I did in ministry and could be used there and were valuable. We literally trained church planters who planted church all over the Soviet Union,” he said.

Morton additionally discussed with The Star what he sees happening to his friends in the nation of Ukraine.

“What’s happened to our friends in Ukraine is completely foreign to us. Imagine if we woke up at five o’clock one morning and there was active shelling in Los Angeles, New York, Dallas, and Atlanta. That’s kind of what our friends woke up to,” he said.

For Morton, the Russian invasion of Ukraine is not about politics, but about the human cost.

Ukraine was a nation that was not where they needed to be, but they were moving in the right direction. One thing we have to recognize is the score and the cost that this conflict is having on children,” said Morton.