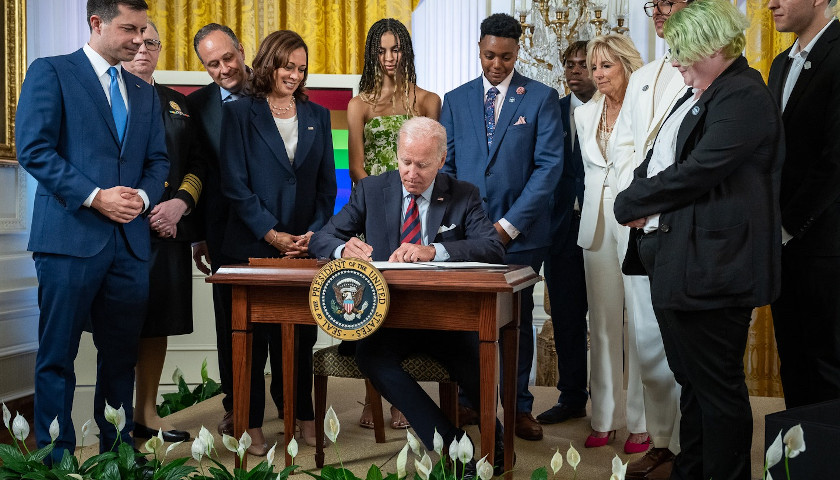 Joe Biden signed an executive order Wednesday that directs his Departments of Health and Human Services and Education to further push life-altering, “gender-affirming” treatments in children who claim gender confusion, and increase LGBTQ activism infiltration, under the guise of anti-bullying and anti-suicide programs, in public schools throughout the United States.

The order is specifically aimed at states that have banned transgender medical interventions for minors, promoted parental rights, and blocked public schools from teaching concepts related to gender identity and sexuality to young children.

Biden’s order comes as a major study by the Heritage Foundation was released this week, one that debunks a central tenet of the narrative of LGBTQ activists within the Biden administration: that gender-confused children who are not immediately “affirmed” in their new identity are more likely to commit suicide.

My new study released today by @Heritage finds that easing access to puberty blockers and cross-sex hormones has actually increased youth suicide rates, contrary to the claims of the Biden admin, advocates, and flawed prior research. 1/ https://t.co/XM4o4ioeOA

I don’t have to tell you about the ultra-MAGA agenda attacking families and our freedoms. Three hundred discriminatory bills introduced in states across this country. In Texas, knocking on front doors to harass and investigate parents who are raising transgender children. In Florida, going after Mickey Mouse, for God’s sake. (Laughter.) That’s striking close to home.

“The executive order will also support mental health for chil- – of children by addressing bullying and suicide and making our schools safer,” he added.

Raising the Unity #Pride flag above ED headquarters for #PrideMonth is more than just a way to honor the #LGBTQI+ community – as Deputy Secretary Cindy Marten shares, it’s a representation of ED’s ongoing commitment to ensure equity for all students. #Pride2022 pic.twitter.com/7PMUUQLhm0

I have no room in my heart for hatred and I have no time for intolerance, but we don’t live in a world where everyone feels that way, and this administration understands that more action is needed. Today’s executive order continues the Biden Administration’s work against prejudice and makes it easier for people living in this country to live their lives openly and freely without fear of harassment, scorn or attack.

Levine cited statistics from the Trevor Project during a recent interview with National Public Radio.

“Fifty-two percent of all transgender and nonbinary young people in the U.S. seriously contemplated killing themselves in 2020,” Levine stated. “Think about how many of them thought it was better to die than to put up with any more harassment, scapegoating and intentional abuse.”

Nevertheless, lawmakers and those making policy that allows easier access to life-altering puberty blockers and cross-sex hormones for children and teens have marketed their proposals based on “poorly executed” studies that purport to show such “gender-affirming” treatments actually reduce the risk of suicide, when the opposite is true, Greene asserted in his study at the Heritage Foundation.

Greene explained to Fox News Channel host Laura Ingraham about the results of his research that, as Ingraham described, “really does turn this completely on its head – the activist narratives on this issue.”

Truth about the Trans-formation of our kids: Where “puberty blockers” were readily available, suicide actually rates went up. pic.twitter.com/KDaWK6yGkM

“Lowering legal barriers to make it easier for minors to undergo cross-sex medical interventions without parental consent does not reduce suicide rates – in fact, it likely leads to higher rates of suicide among young people in states that adopt these changes,” Greene’s summary noted.

“States should instead adopt parental bills of rights that affirm the fact that parents have primary responsibility for their children’s education and health, and that require school officials and health professionals to receive permission from parents before administering health services, including medication and ‘gender-affirming’ counseling, to children under 18,” Greene said, clearly a view that is in stark opposition to that of Biden and Levine.

“States should also tighten the criteria for receiving cross-sex treatments, including raising the minimum eligibility age,” he added.