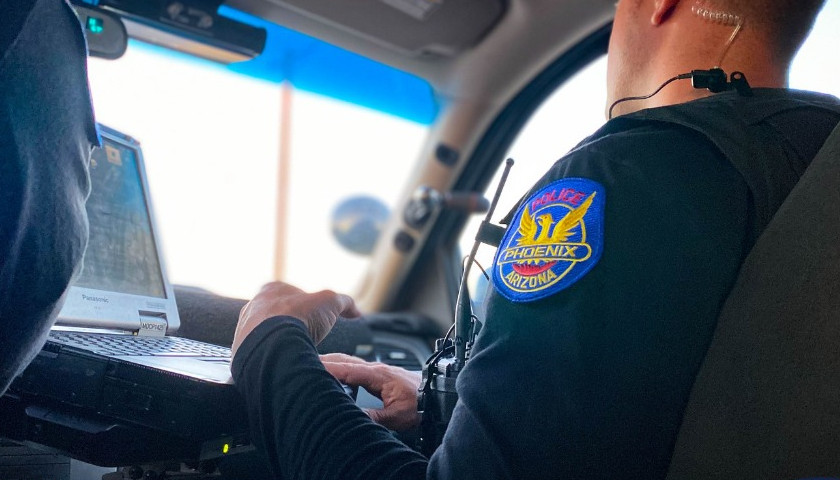 The Phoenix City Council is set to vote Wednesday on a salary hike for new recruits that would lift their base pay from $48,942 (or $51,459 if they have college degrees) to $68,661 – or 40.8 percent. Officers making less than the new minimum base pay would be brought up to $72,779, and pay grade steps from recruits to assistant chiefs would increase. Other Phoenix Police Department (PPD) employees would receive a 3 percent pay increase in October.

The City of Phoenix issued a statement announcing the vote which said in part, “Currently our police recruit position is approximately 7 percent below the market average; this plan would bring salary ranges approximately 10 percent higher than any other law enforcement agency in the state.”

The decision was proposed after a study committee tasked by City Councilwoman Ann O’Brien, who is the Public Safety and Justice Subcommittee chairwoman, found the increase necessary. O’Brien said the goal is to get staffing levels back to where they were before the 2008 economic crash. The committee will present its results at the meeting next Wednesday.

The response time for emergency calls had increased to seven minutes and 21 seconds — above the five-minute standard. Lt. Ben Leuschner, president of the Phoenix Police Sergeants and Lieutenants Association, said that about 20 officers leave the PPD every month and aren’t replaced.

Democrats control the Phoenix City Council and the mayor’s office and have pushed back against pay increases, but Democratic Mayor Kate Gallego indicated she would support the increase.

“We are the big city in Maricopa County,” said Gallego. “We respond to a huge variety of calls and have some of the most advanced technology. Our pay needs to match this.”

The Arizona Sun Times spoke with a 16-year-veteran police officer with PPD, who said the reason Democrats are finally agreeing to change the pay scale is because elections are coming up. Additionally, he said the first part of the compensation study jolted them. It found that although PPD hired 71 new officers in 2021, 274 left. And of the new officers, 13 left by the end of the year. “They’re losing an officer a day,” he said.

Last November, the patrol force was over four dozen officers short of the minimum needed. In February, more than 100 specialty officers were transferred in February from positions like Violent Crimes to patrolling the streets. Officers are also encouraged to work on their days off. The police officer who spoke with The Sun Times said he could show up at any precinct across Phoenix and offer to work overtime and there would be a slot available.

Phoenix City Councilman Sal DiCiccio, who has been a vocal proponent of law enforcement, warned last month that the situation had gotten so bad it was hurting morale. He said PPD needs 3,800 officers, but it only has 989 patrol officers. The situation is expected to get worse, with hundreds of officers closing in on retirement.

We are way below the amount of patrol officers a city our size should have and morale is at an all time low.

Compounding the problem is the national backlash against police over alleged brutality, dissuading potential recruits from choosing a law enforcement career. Under the Biden administration, the Justice Department launched an investigation into allegations of abuses by PPD. Against the votes of DiCiccio and City Councilman Jim Waring, a new Office of Accountability and Transparency (OAT) was formed in 2020 to provide civilian oversight of the PPD. The Arizona Legislature passed a law that would require OAT to include police officers, prompting litigation by the City of Phoenix.

The 16-year PPD veteran told The Sun Times that the pay adjustment is overall a good step for officers with experience like himself. It will combine incentive pay that older officers have earned with their base pay, allowing them to receive a pension based on that total number. Previously, their pensions were decided on base pay only. It will also allow them to continue to increase their pay. He had maxed out, so had barely received any raises — merely a couple of tiny 1 or 2 percent raises — over the past 10 years. Those raises were contingent on the economy, and for four to five years there were no raises and officers were required to give back their vacation pay.

The City of Phoenix said the pay increases would be absorbed in the existing budget. There was a large budget surplus this past year of $76 million, two-thirds of which is being saved in a rainy day fund. If approved, the new pay scale will go into effect on August 8.

The pay increase would bring officer pay in line with other large cities across the U.S. An entry-level officer in the San Francisco area makes $72,820 annually. The Los Angeles Police Department pays new recruits $75,000 annually after graduating from the training academy.