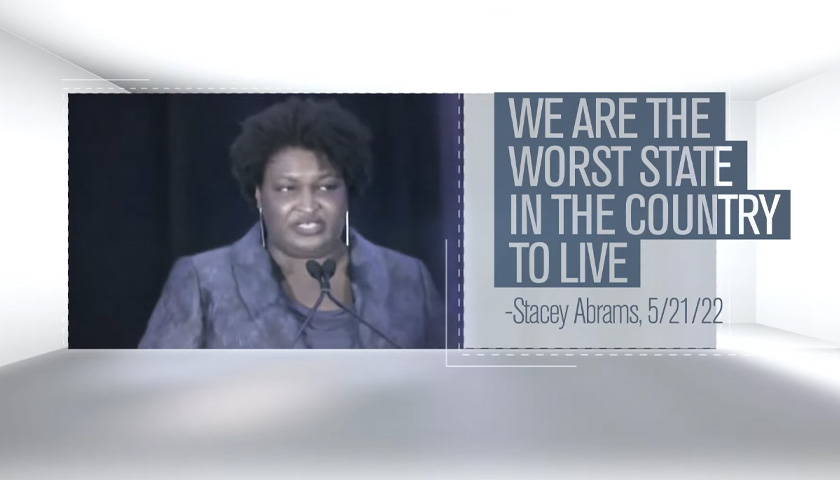 As the race for Georgia’s governorship intensifies, Governor Brian Kemp (R) Tuesday launched an ad attacking opponent Stacey Abrams for recent comments she made about living in the Peach State.

“Georgia is the worst, according to Stacey Abrams,” the ad says. “Bless her heart.”

The ad was a response to Abrams’ comments at a May dinner hosted by the Gwinnett County Democrat Party.

She later attempted to defend the comments.

“GA may be #1 place for biz, but we’re #48 in mental health, #2 in uninsured. #1 in maternal mortality & new HIV cases, #9 in gun violence. For too many, Kemp’s Georgia doesn’t include them. Why? Because #KempDoesntCare. As Governor, I’ll lead #OneGeorgia that’s #1 for all of us,” she said on Twitter.

GA may be #1 place for biz, but we’re #48 in mental health, #2 in uninsured. #1 in maternal mortality & new HIV cases, #9 in gun violence. For too many, Kemp’s Georgia doesn’t include them. Why? Because #KempDoesntCare

As Governor, I’ll lead #OneGeorgia that’s #1 for all of us.

Abrams is no stranger to controversy.

She kicked off her second bid for the governor’s mansion by posing for a February photograph with students at an elementary school and violating the school’s COVID-19 mask protocol, which remained in place at the time.

Abrams can be seen in the photo without a mask, while all of the students in the classroom wear masks.

She later said the incident was a “mistake.”

As The Georgia Star News has reported extensively, Abrams sponsored legislation as a member of the State House of Representatives that furthered her own private business interests.

She also infamously refused to say that Kemp was the legitimate winner of the 2018 election matchup between the pair.

“Despite the final tally and the inauguration [of Gov. Brian Kemp] and the situation we find ourselves in, I do have a very affirmative statement to make: We won,” she said at an event hosted by Rev. Al Sharpton after her election loss.

“Concession means to say that the process was fair, but when I run an organization that in 10 days between election night and the night I refuse to concede we receive more than 50,000 phone calls for people who were denied the right to vote I am complicit if I say that that system is fair,” she later said.

At the beginning of the 2022 election cycle, Abrams claimed that she never challenged the results of the 2018 election.

Pete D’Abrosca is a reporter at The Georgia Star News and The Star News Network. Email tips to [email protected]