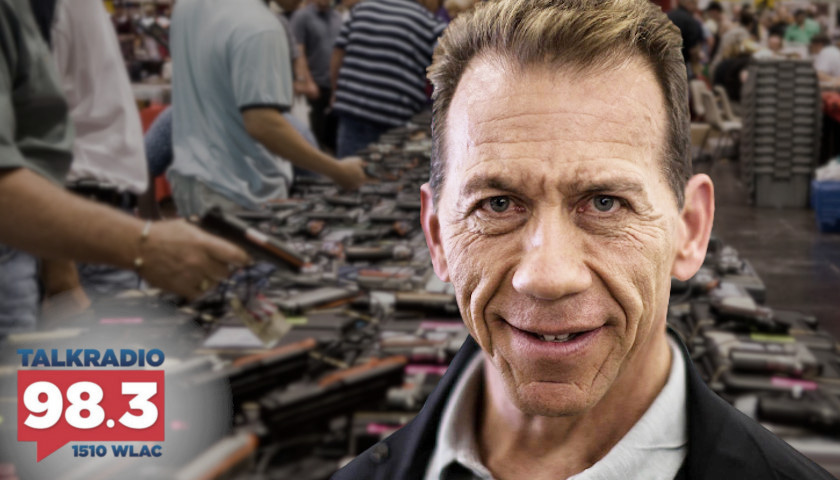 Live from Music Row Monday morning on The Tennessee Star Report with Michael Patrick Leahy – broadcast on Nashville’s Talk Radio 98.3 and 1510 WLAC weekdays from 5:00 a.m. to 8:00 a.m. – host Leahy welcomed GlockStore founder and CEO Lenny Magill in-studio to discuss the firearms retailer’s philosophy to gun handling and training leading up to an open-house event on June 11th, from 10 a.m. to 4 p.m.

Leahy: In-studio, our good friend, former Californian-now Tennessean, Lenny Magill. Lenny, thank you so much for coming in. Again, it was so energizing the very first time you came in here and you talked about your entrepreneurial career.  Just kind of give people an update of how you became the owner of the GlockStore.

Magill: I started in California as a young man. I moved from Pennsylvania to California when I was 18 years old, and I got involved in a variety of different things.

Leahy: You were a waiter, weren’t you?

Magill: I was a waiter.

Leahy: Were you a singing waiter?

Magill: I was at Farrell’s Ice Cream [Parlor].

Leahy: So we can tell with that voice. This is a guy who has a good singing voice.

Magill: Yes. I was doing the birthday announcements for Farrell’s Ice Cream. It was kind of fun. And one of the guys came in, and one of the families came in and said, hey, you’ve got a really good voice. Why don’t you come down to the radio station and do some work with me? And I said, well, great. So I went down as an intern at a radio station.

And then one day I asked him, I said, well, how do you make any money around here? He says, well, you go sell advertising. (Laughter) So I said, well, okay, give me a rate card. I went out and sold some advertising that day.

And I thought, well, this is pretty cool. I started wearing a tie going out, and I thought I was a big deal. At the end of the day, I was making a lot of money selling advertising, on the radio station, way back before the internet and all the other stuff. Things change.

Leahy: I remember that era, Lenny.

So, Cox Cable, then, I got involved with ESPN and I realized I could buy a half-hour show on ESPN. And one of my customers had a shooting range, and he introduced me to John Bianchi. John Bianchi made holsters, and John Bianchi had this big pistol tournament out in Missouri.

Leahy: And since then, you have become, really, an expert on guns and shooting.

Leahy: How many videos have you produced in your life?

Magill: Well, my YouTube channel, we have over 300, 400 of them. But I have also a series of instructional videos that we sell on Amazon. And we also stream, like gunvideo.com. So there’s a streaming portion of that as well.

And I’ve got about 400 videos on all aspects of firearms. So I’ve done a lot of video production work over the years, and I still continue to add to my YouTube channel, which is glockstore.com.

Leahy: Now, in terms of glockstore.com, are you like, the largest supplier or distributor of Glocks in the private sector?

Magill: Yeah, we’re the largest retailer of Glocks in America. So we sell more Glocks than anybody else in the USA. So we do, of course, sell them online at glockstore.com. And we have a retail showroom here in Nashville.

Leahy: And by the way, I just want to get back to the retail showroom. Just my personal experience: There are people in this listening audience who – I think everybody in this listening audience supports the Second Amendment, but not everybody is a gun owner or gun user. And part of it, I think, has to do with sort of fear and reticence about, I mean, a gun. It’s a very serious thing.

Leahy: It’s a tool, and it can be very damaging, obviously.

Magill: You need to learn how to use it, and that’s what we do at our range.

Leahy: That’s the key. Learning how to use it. And again, I want to go back to this. So the first time I shot a gun, I was invited over to your training to Shoot270 rooms, and it was just me and a trainer.

And 270 is, basically you don’t have lanes that are with multiple people going there, and you’re distracted by somebody else. It’s just you and the trainer. I felt very comfortable doing that.

Magill: Yes. We basically gear the training to the individual. So it’s not a cookie-cutter class. It’s like, well, where are you starting? Have you shot guns before? Do you want to go through sight picture, trigger pull, stance, grip, all the basics? Or are you beyond that, you want to be a little bit more dynamic, and we can set up multiple targets in multiple directions. The key is, though, it really is a private environment.

So you do not have people that you don’t know with guns, shooting on either side of you. And you can learn a lot more in that one-hour session than if you were to go to a group lesson for six hours. And we hear that all the time. And people not only come for the first hour, they typically will book sessions after that because shooting is a perishable skill.

But you can very quickly become a proficient shooter, because it’s not difficult. It’s not like playing golf. You’re good one shot, and you’re terrible. Once you learn the basics and learn the concept, most people, if you have any physical skill whatsoever, can become proficient and safe with a firearm.

Leahy: Yes. And that’s the key, I think, isn’t it – proficient and safe? And you do move up the curve fairly quickly because of the way that you do this training and private instruction.

Magill: Yes. And the fact that you’re in that room by yourself, you really can absorb that information quickly and really in just one, two, three sessions you can become proficient, competent and safe. And the key to the whole concept of a firearm is safety first.

You always have to know how to operate the gun, and we take the time to look at the gun you want to shoot. It doesn’t have to be a Glock. And we say, this is how it operates and this is how you keep it safe, and this is how you store it, and we have all the equipment needed at our facility to help people do that.

Leahy: Now, one of the things about this open house that you’re having on Saturday from 10:00 a.m. to 4:00 p.m., One thing caught my attention. There are some training classes that can be taught. One of them, you’ve got to explain this to me: how to get arrested. I have an idea of what that’s about. What is that?

Magill: One of our staff members is a former police officer, and he said, hey, oftentimes people don’t understand the law enforcement side. So, if you are in a situation where you’re in some kind of traffic accident, traffic stop, even physical altercation at a bar, whatever, here’s how to take and handle yourself so that you don’t …

Magill: Yes. Here’s how to deal with law enforcement. This is how they want you to act so that it doesn’t get out of control and they know that you’re a good guy because if you do certain things over here and you start to agitate the law enforcement, they’re going to agitate you back.