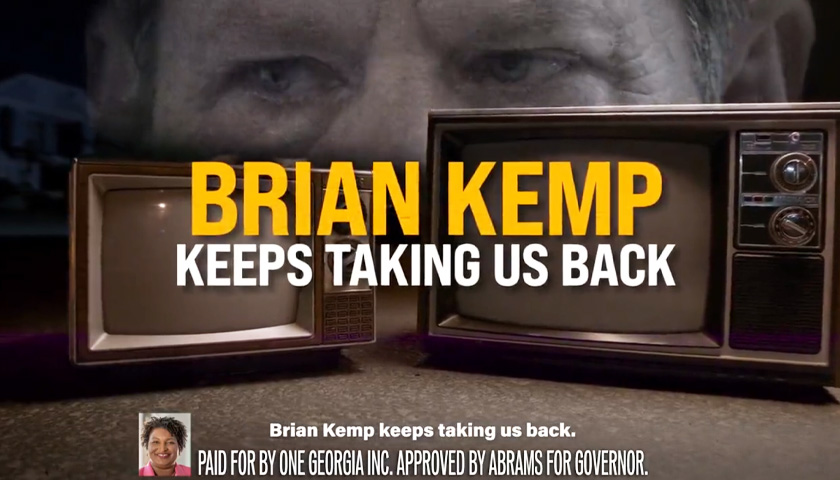 The ad claims that Kemp “put us backwards on guns,” citing “law enforcement,” and said that Kemp has made it easier for criminals to obtain weapons.

That is an apparent reference to a Constitutional Carry law signed by Kemp in April, which allows law-abiding citizens to conceal a weapon without a permit.

Abrams has dubbed that “criminal carry legislation,” despite the fact that felons are prohibited from owning firearms.

“Our children across Georgia are bearing the heartbreaking consequences of gun violence. Instead of addressing the crisis, Brian Kemp signed criminal carry legislation that will put more guns on our streets and make our communities less safe,” she said last week.

The ad also claims that Kemp “rolled back women’s rights,” but did not provide evidence to show that Kemp or the legislature had taken such action.

“And while Georgians struggle, Kemp gave massive, old-school tax cuts to his ultra-wealthy friends,” according to the ad. “Just when we need to move forward, keeps taking us back.”

The ad was showcased by a Twitter account called “One Georgia,” which is the theme and slogan of Abrams’ campaign.

Brian Kemp keeps taking us back… on guns, on abortion, and even a massive tax giveaway… for himself.

Georgians deserve a governor who will move us forward – not a guy stuck🕹in🦕the📼past. #gapol

In March, Abrams debuted her first campaign ad as she ran unopposed in the state’s Democrat primary election.

“I was raised that when you don’t get what you want, you don’t give up,” Abrams said in the ad. “You try again. You try because it’s how things get better. It’s how the world moves forward. I don’t quit, because Georgians deserve leadership, and that’s what a leader does.”

Help us reach as many voters as possible and keep it on air: https://t.co/5Kl4dWlO6r pic.twitter.com/bT8RfT0VsP

Kemp and Abrams are squaring off in a rematch in what is one of the highest profile gubernatorial elections in the country.

Abrams contested the results of the election, initially refusing to concede.

She later blamed “voter suppression” for the loss.

Pete D’Abrosca is a reporter at The Georgia Star News and The Star News Network. Email tips to [email protected]
Photo “Brian Kemp Ad” by One Georgia.