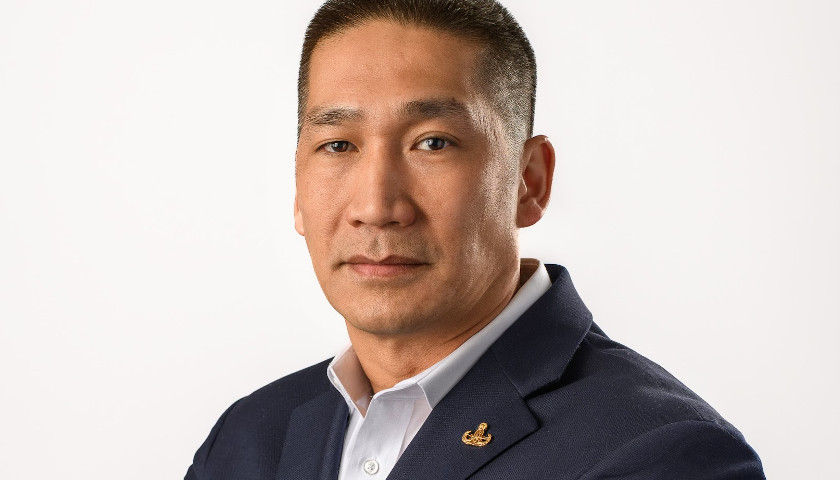 GOP nominee for Virginia’s 10th Congressional District Hung Cao said his top priorities if he’s elected to Congress will be the economy and national security.

“We have to stabilize this economy. This is spiraling out of control,” Cao told The Virginia Star. “We have to cut spending. This is not just about my kids and your kids, but our grandkids and our great-grandkids. This is going to resonate for years.”

Cao said the U.S. is headed towards depression, comparing the U.S. to Venezuela.

He said, “For me, someone who escaped communism, this is the Alamo. There’s no Alamo left to run to after this; we’re kind of screwed. At least people in Venezuela can run to the United States, but what happens when there’s no United States?”

He’s also calling for a focus on national security, including the border, and says the defense industry is VA-10’s largest employer, and he’s not just focused on big corporations.
“They all subcontract to a smaller company, and the small businesses, right?” he said, noting that mom-and-pop shops also drive the economy in VA-10.

“People just say, ‘Oh, the military spends so much.’ But it really isn’t that much, if you’re looking at all the things we have to pay for.”

Cao is a Navy veteran who overcame a packed field including a Prince William County supervisor and an outspoken Loudoun County parent. The victory was powered in part by Cao’s outsider status and compelling immigration story: when Cao was a child, he and his family were Vietnamese refugees who fled to the U.S.

Cao retired as a Navy Captain in the end of 2021, but said that the Afghanistan withdrawal motivated him to run for Congress.

“Watching Kabul fall, and watching mothers hand babies to marines, for just hope and opportunity, I mean that broke my heart, because that’s just like what happened with Vietnam,” he said.

He highlighted the deaths of American soldiers and of Afghan police who were tortured by militants. Cao criticized Biden’s handling of Afghanistan, Iraq, and Vietnam.

Cao said, “These people aren’t even human beings, they’re animals, and we turned the country [Afghanistan] over to them. We didn’t do it. Joe Biden did it. And this same guy was the one that turned over Iraq to ISIS, right?”

Cao is also critical of the recent $40 billion Ukraine aid spending package to support that country in its war against Russian invasion.

“They gave that bill out two hours before voting. So none of the members of Congress were able to look and see what was inside of it,” he said.

“To be honest, you know, why are we securing someone else’s border when we can’t even secure our own border?” Cao asked, highlighting not just immigration but growing Chinese influence in South America.

Cao highlighted the example of former President Donald Trump, who pre-COVID cut spending in most areas while bolstering the military.

“I’m telling you right now, we’re going to need billions more if you want a military that can sustain itself and to defend this country,” he said.

“The best way to posture is to have a strong national defense, a strong military that no one’s going to mess with,” he said, quoting former President Theodore Roosevelt’s “Walk softly and carry a big stick.”

But Cao also highlighted Trump’s willingness to pull the U.S. out of some unwinnable fights.

He explained, “”I fought wars, I’ve seen the horrors of war. And the last person that wants to get into another war is me, because my son’s about to enter the Naval Academy,” he said.

“But if we have to step up, I want to give them the tools to go in there and win and not be held back by rules of engagement that make no sense and policy that’s dictated by these people at the State Department that have their own agenda.”

He criticized presidents for skirting the line of the War Powers Act and pushing it beyond its limits.

In 2021, Loudoun County Public Schools catapulted into national headlines amid controversy between school officials and conservatives alarmed at school closures and equity practices. That helped power Republican wins across Virginia, and is part of the reason for the wide field of GOP candidates who sought the nomination. Cao beat out multiple candidates more closely tied to Loudoun school politics, but he is an alumnus of magnet school Thomas Jefferson High School for Science and Technology.

That school is battling the Republican administration after changing its admissions policies to be more inclusive.

“They changed the criteria so it went from 73 percent Asians to 53 percent, right, because for equity purposes, that’s why they did that. And what it did is pull the whole school down, because now you have kids who are just not academically prepared to matriculate,” he said.

Cao also criticized sexual content of curriculum in some schools. He said that he would use his position to influence local policy.

He said that process allows the federal government to dictate school curriculum and subvert the governor and the secretary of education.

In an interview the same day as the mass shooting and murder at a Texas school at the end of May, Cao told Loudoun Now, “Gun control has never stopped anyone. Most people get bludgeoned to death and stabbed to death than they get shot. I mean it’s a tragedy, it’s an absolute tragedy. But if it’s not guns it’s going to be with pipe bombs. Or knives or hammers. People get bludgeoned to death a lot. What do we control? Fentanyl has killed a lot of people. It’s just evil – there’s a lot of evil in the world and we’re not going to stop it with gun control.”

Cao’s comment was criticized by some. He told The Star that the question caught him off guard.

“This young reporter was not a reporter, she was more an activist because she went straight into gun control,” he said.

He said he has compassion for the victims, and said, “I’ve seen evil. I’ve stared it in the face. No legislation is going to stop evil.”

Instead, he called for teaching compassion and civility.

He said there’s also a need for increased security at schools, including in VA-10, in partnership with local law enforcement.

“This is why defunding the police doesn’t work, right?”

Virginia’s 10th congressional district has been reshaped thanks to new district lines. According to estimates by The Virginia Public Access Project, the region has consistently voted Democratic – but in 2021, Terry McAuliffe only got 50.5 percent of the vote in the district, and Youngkin got 48.9 percent. Out of Virginia’s three competitive congressional races, VA-10 is seen as the biggest reach, but Cao’s ability to turn out more Asian voters may help.

“If he can keep up that momentum of bringing out new voters we will be doing a great job come November,” Deutsch said.

Cao said Biden and Representative Jennifer Wexton (D-VA-10) are doing his work for him.

“The economy’s in the tubes, you have inflation [that] has skyrocketed, the cost of a gallon of gasoline is higher than a quart of oil, which is terrible. And we have a supply chain shortage which is really man-made, a lot of this is man-made by the administration,” he said.

He faulted the administration for its handling of the baby formula shortage. He said some parents are watering down formula, which is harming babies because they don’t get enough electrolytes.

“Those are concerns,” he said. “So they’re not just killing our babies in the womb, or right after birth. They’re killing them after they’re born. So the administration’s really – I don’t know. I mean, I think people are getting sick of all this stuff.”